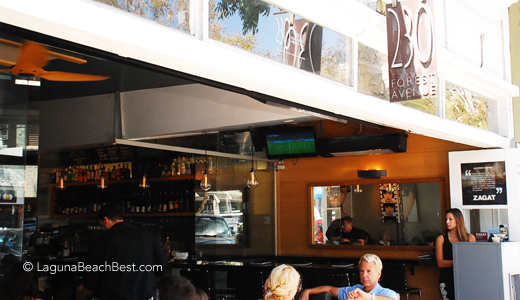 It’s hard to believe that 230 Forest Avenue Restaurant & Bar is nearly 20 years old. Recently, she’s had a bit of a face lift – new lighting, new art on the walls, new tables, a new swanky back bar – but the girl still stands at the same spot, with the same signage on a hinge above the hostess stand all these many years later.

While it’s surprising to think of 230 Forest as a 19-year-old, it’s not hard to believe that Executive Chef and Managing Partner Marc Cohen always finds a way to innovate the day-in, day-out menus, even 7,000 days later.

He can’t help himself. In fact, just a few weeks ago, Chef Marc rolled out an entirely new 230 Forest Menu for both lunch and dinner, changing up more than 60 percent of the existing menus. 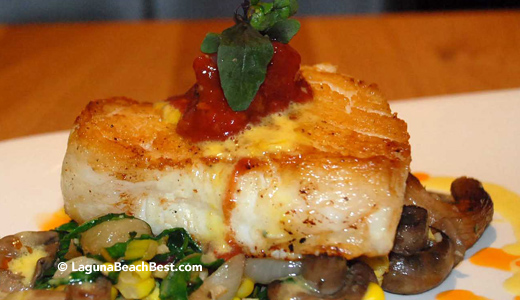 In the process, he’s re-invented sauces, dressings and blends, and created layers of fresh vegetables, light pastas and grains. Take, for instance, Chef Marc’s “refreshed” Chilean Sea Bass atop a sauté of fava beans, sweet corn and roasted mushrooms. The Sea Bass is dotted with a drizzle of saffron cream and Chef’s own creation, tomato jam. It’s a lovely blend of fresh, summery tastes with the dollop of tomato assuring you that this will be a summer to remember in Laguna Beach.

“230 has always served an elevated type of food,” says Chef Marc. “But the great thing is that guests are much smarter now about food ingredients – people these days seek out new types of food and ingredients. They appreciate it and look forward to it. So, I think our new menus reflect and respects that elevated knowledge, too.”

Ask Chef how long it took to revise the 230 Forest Menu and he can’t answer that question. “Dishes are always inventing themselves in my head. The challenge is in getting them all down on paper, and then seeing what fits where for your specific clientele.

“At that point, it’s all about creating consistency,” he adds. “You can change all sorts of things on your menu at your whim, but every dish has to be consistent from that day forward. That is absolutely imperative.”

Consistently Cookin’ For Many a Year

Chef Mark, a native of Baltimore, has been around cookin’ all his life. At the age of 14, he was hired by the next door neighbor – a chef at Baltimore’s Grand Hyatt – and Cohen hasn’t looked back since.

In Culinary School, he rose to the top, participating on the Culinary Olympic Team in Frankfurt, Germany in the process. At the age of 22, he was appointed Chef and asked to rescue the declining restaurant, Sutton Place’s Blue Point Grill, in Old Town Alexandria. He not only turned the restaurant around but also earned media attention for his efforts, and was named a “Top 20 Young Chefs.”

Shortly after receiving the accolade, the founding partners of yet-to-be-named 230 Forest were visiting the well-known D.C. restaurant, and “suggested” that Chef Marc take a gander at a new concept they were developing in Laguna Beach. And, once again, he hasn’t looked back since. 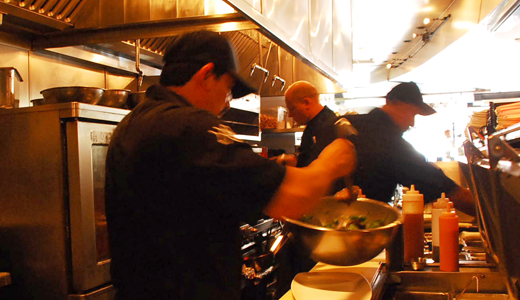 Today, 230 Forest Avenue continues to remain one of the most consistently successful and iconic restaurants in Laguna Beach. And, as if serving 300-500 clients a day isn’t enough at 230, Chef Marc works the line daily in his other two restaurants as well.

In 1999, The 230 Forest partnership opened Opah in Aliso Viejo, and then opened Watermarc in 2008. “We opened Watermarc at the worst possible time to open a restaurant,” says Chef. “But, we decided to gamble on our locals, regulars and Laguna Beach instead of the economy. We knew if we focused on that, that in five years we wouldn’t even be thinking about the economy … and, thankfully, it’s all turned out really well.”

For a chef who can’t stop thinking of new things to create, having three restaurants certainly helps.

Aliso Viejo’s Opah restaurant is a “seafood mix grill” of California cuisine, situated dead center in a swarm of corporate chain and franchise restaurants. “We wanted to be the non-corporate choice,” says Chef. “It looks different, it feels different, and the cuisine is fresh and enticing.”

For his third restaurant – Watermarc – after interviewing regulars and locals in Laguna, Chef Marc simply followed their suggestions. “At that economic time, people didn’t want to commit to a single, expensive big dish or bottles of wine, so we created lower priced ‘grazing’ plates and a menu that serves 50 wines by the glass, half glass and bottle.

A Bite of the Big Apple

At the Mother Ship – 230 Forest – Chef Marc created more of a New York-style bistro, both in atmosphere and menu. With just 1,900 square feet to work with, the tables are closer together, “and you hear everything we’re creating in the restaurant … the kitchen is right there, and you can hear the drinks being created,” says Chef. “It’s a fun experience. 230 Forest creates its own energy and community, just like you’d expect to find in a great neighborhood restaurant in New York.

“And, when I think, “New York bistro,” I also think the food has to stand for itself,” he adds. “You never want to do so much that the protein becomes unidentifiable. We work hard not to overpower the food we’re creating.”

With the new menu, the only item I find overpowering is my own indecision on what I’d like to try.

New Favorites on the Menu 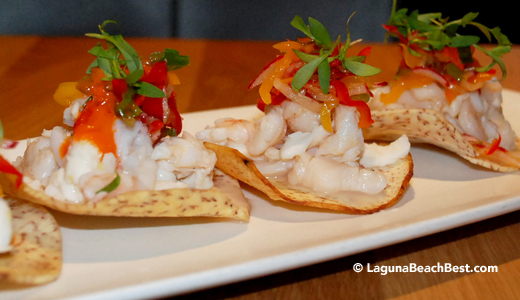 For Chef Marc, his current favorites are the Day Boat Scallops, named as such because the scallops are caught in Maine or Canada that day on a boat and overnighted to Marc’s receiving door. He lines the fresh scallops atop a perennial favorite, butternut squash risotto. He also prefers his Espresso Rubbed “1855” New York Strip Steak, with a rub concocted of espresso, chili and dry mustards and served with creamed spinach and (get this) blue cheese stuffed profiteroles.

He decides I should try some “lighter fare,” and bustles off to his kitchen to create his own mini-menu for me. In minutes, he returns with a gorgeous Ceviche, tossed in a light mix of citrus juices and olive oil and served aboard taro root chips with a crown of red, yellow and orange pepper mini-slices mixed with cilantro. Even while it’s served like a mini tostada, the Ceviche’s taro chip is flexible enough for folding (more like a mini taco), and it holds up sturdily under the juices and fresh fish. It might quite possibly be my new favorite in town. 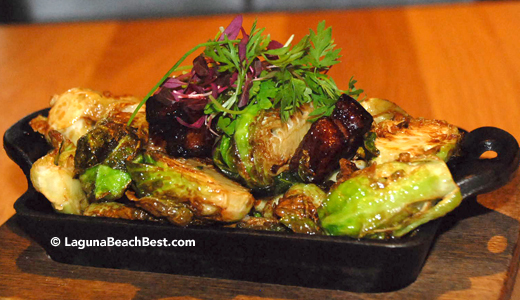 Then, it’s on to his Fried Brussels Sprouts & Bacon. I’m not sure where the term “bacon” actually arrives as far more heavenly and hearty squares of whole pork loin star in this little show. Chef Marc and team cut the loin squares and braise them in vinegar, apple juice, carrots, celery and clover honey for about three hours before quick-frying them with the Brussels Sprouts. A quick toss of pressed lime and sea salt, and the still-steaming batch makes its way to your table.

A staff favorite, the new Smoky Eggplant Salsa arrives in a miniature canning jar with a neighborly pile of grilled flatbread. The smoked eggplant is blended with hummus and layers the bottom half of the jar. It’s then topped with toasted walnuts, feta and mint. 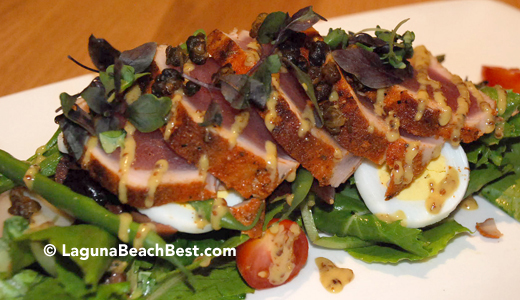 Chef Marc surprises me with a refresh of one of my perennial 230 Favorites, the Blackened Ahi Niçoise Salad. His Niçoise Salad was always the finest in the land – not a single restaurant I’ve ever visited has come close to competing. I express my concern about messing with perfection, but Chef Marc just grins, trots away and eventually arrives with a dish that erases the very look of his former Salad from my memory banks.

This is a beautiful, fresh dish, all tucked together a bit more neatly than what my suddenly-fuzzy memory tries to recall. It arrives with a gorgeous lineup of the freshest Ahi atop greens, haricot vert, thin potato and egg slices, tomatoes and Kalamata olives. Happy capers skip across the Ahi tops, and just the slightest mustard vinaigrette drizzles the creation. Somehow, the best Niçoise Salad in the land has outdone itself.

Finally, Chef serves the Chilean Sea Bass (mentioned at the top of this article), and it is as delightful as every dish I’ve nibbled. Every taste on every dish stands apart as a unique entity … and I suspect the same to be true for the remaining 42 items on the 230 Lunch and Dinner Menus.

What This 19-Year-Old Knows

Of course, Chef Marc and his team are happy to modify dishes as well. “We’ve probably seen 1,000 diets and 1,000 fads, some of which are significant and enduring, and others that come and go. But that doesn’t matter to us. What matters is that we adapt to our clientele for their best experience. We make everything to order in our restaurants.”

Asked what his 19 years of experience would suggest to chefs arriving in Laguna Beach, and Chef Marc ponders before answering.

“It’s important to understand that Laguna Beach residents make up a melting pot of diverse blends of professions and interests. This is a very eclectic, worldly space. Don’t ever attempt to “dumb it down” because these people are sophisticated. And, stay open-minded … you’re not always going to get it your way. Once you let go of that, you’ll find that these people will teach you a lot and support your success.”