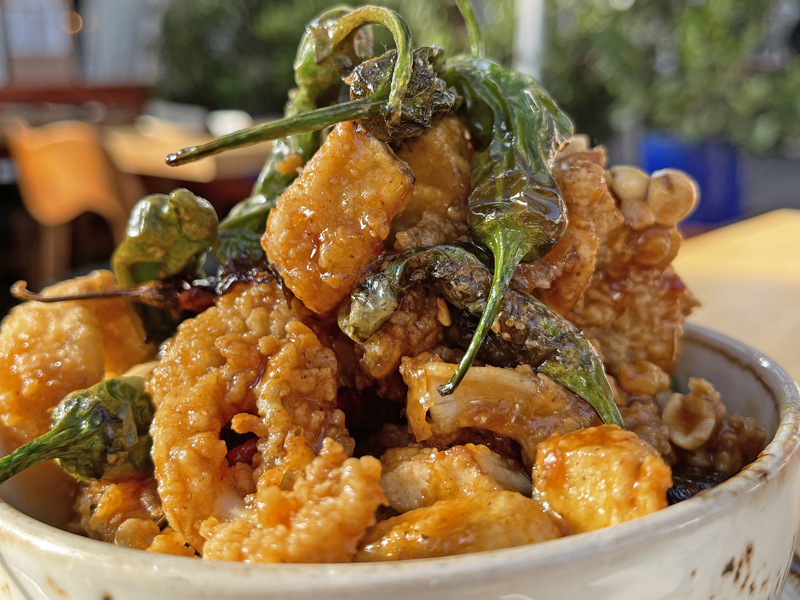 Chef Marc Cohen established his “California Cuisine” restaurant, 230 Forest in 1995 when very few people even knew what that kind of cuisine was. Chef Marc proved a trailblazer in the field and – 26 years later with a world of chefs scrabbling after his lead – he’s still manning the daily helm at the busy downtown location.

Officially our oldest-running restaurant in town, Cohen has his share of war stories, the most of which occurred in the year we’ve just experienced. Last spring, he chose to permanently close the local favorite restaurant, Watermarc, and significantly reduced operations at his Aliso Viejo-based Opah Seafood Grill. 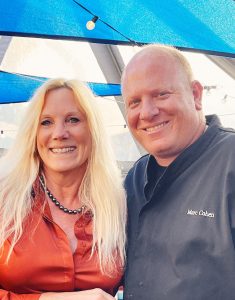 Chef Craig Cohen celebrates 26 years this year as the Chef/Owner of the ever-popular 230 Forest.

Chef Craig Cohen celebrates 26 years this year as the Chef/Owner of the ever-popular 230 Forest.

“When the City of Laguna opted to create this Promenade, it was a real life saver,” he noted.

“I’m just hoping the Promenade continues to get extensions; maybe someday it can become a permanent thing,” he said.

Sitting in the late afternoon summer sun, I almost felt like a tourist enjoying our beachy town for the first time. It was Happy Hour, something that Chef Marc has stoutly insisted on maintaining from 2:30 p.m. to 5:30 p.m. Monday through Friday (excluding holidays). 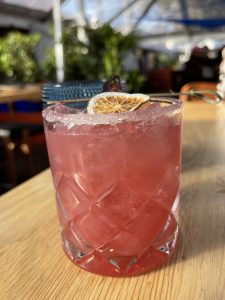 230 Forest continues to create some of the craftiest cocktails in town, including this best-selling Mission Fig Margarita.

I ordered the waiter’s recommendation, 230’s best-selling Mission Fig Margarita with fresh fig purée, silver tequila and pressed lime. It was simple and smooth and entirely too drinkable.

Because I’ve only been ordering 230’s take-out all this time, I opted for one of my favorites, Kung Pao Calamari. In my opinion, calamari is always best eaten fresh out of the chef’s kitchen; it typically doesn’t travel well. 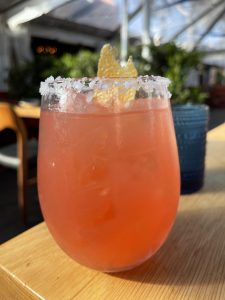 Click on photo for a larger image
Photo by Diane Armitage
Another popular cocktail at 230 Forest, the Blood Orange Paloma.

This 230 dish is a heaping pile of melded sweet, salty and spicy tastes as lightly breaded calamari is flash-fried with peanuts and Japanese eggplant (milder than the larger cousin). It’s tumbled and served with just the right amount of sauce pooling at the bottom of the bowl. As a bar menu item, it’s plenty of munching for two or three people.

Chef Marc continues to serve a lunch and dinner menu of local favorites – eight soups and salads (including his famous Maui Onion Soup), three sandwiches he simply can’t remove from the menu for fear of instant uprising, and seven entrées that wander the gamut from Fish ‘n Chips to an out-of-this-world Maple-Brined Pork Chop. Everything on the menu is available to go. 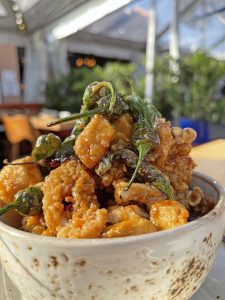