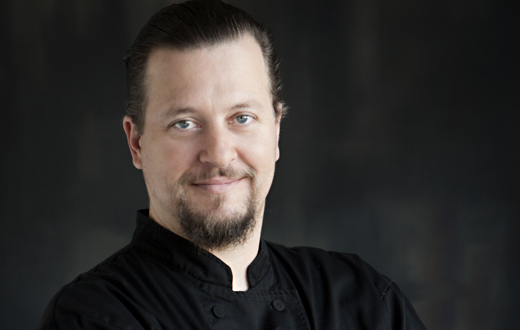 As a dedicated foodie and restaurant reviewer, there’s nothing better in life than discovering a truly talented chef who doesn’t take himself (or herself) too seriously.

When a chef takes the time to chat with you and proves more excited about creating amazing food than you are trying it, that chef has added a whole new dimension to your dining experience. 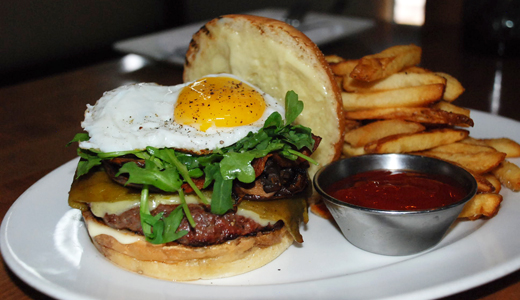 Until last week, Chef Ryan Adams at Three Seventy Common Kitchen+Drink was a mystery to me as I’d never really had the chance to meet or talk with him. I’ve tried his food on a few occasions, and have claimed his 10 Napkin Burger one of the three best in Laguna Beach (wow), but the dude remained in the shadows … until last week. Now he’s one of my most favorite people in Laguna Beach.

For starters, Chef Ryan looks entirely too young to possess such a remarkable resumé. Chef Ryan was designing menus and kitchens back when David Wilhelm still commanded much of our city’s dining experience, and Ryan has continued to consult for a number of restaurants in same manner. He does this in his “spare” time while also acting as the head of all operations and menu development at North Left in Santa Ana and constantly innovating at his own restaurant, 370 Common Kitchen.

Initially the Executive Chef at Sorrento Grille, Chef Ryan purchased the restaurant in 2011 with Three Seventy Common’s concept in his mind. He updated the restaurant’s look to more of an “urban feel,” and shifted the menu to what he calls “comfort food in farm-to-table fashion.”

“People today want to know where there food comes from,” says Chef Ryan. “The whole concept of 370 Common was to shift to sustainable cuisine while supporting local farmers in our area. I think just having those two facts in your head is going to make your food taste more awesome.”

More awesome it is indeed. And comfort food – oh man, most definitely. But Chef Ryan fails to mention yet another rare caveat at 370 Common – a significant gluten-free offering of options that support people who suffer Celiac disease.

“I actually designed the gluten-free items to cater to our bartender, John Doll,” says Chef Ryan.

“John was so sick at one time that his doctors thought he had cancer before they determined it was Celiac. As we all went through this scare with him, I realized just how serious this is for so many people. So, we offer a number of items that are gluten-free and the majority of our menu items can be configured to gluten-free requests.”

And the Importance of “Foodie Food,” Period. 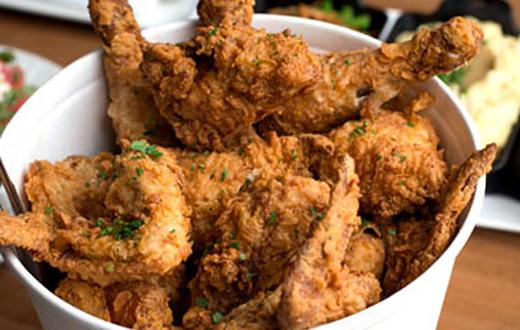 For the record, Chef Ryan’s famous Fried Chicken, served every last Sunday of the month, is not gluten free but he’s working on it. The good news in the Fried Chicken corner, however, is that he’s now serving chicken every month of the year. Initially, Chef Ryan refused to serve his Fried Chicken in winter months as chickens with a lot of body fat don’t take to the breading (a lesson his grandmother taught him). Recently, though, he found a local farmer who maintains farm-raised chicken with less than 25% fat content year-round. Problem solved!

Because the Fried Chicken isn’t available on weeknights, I settle (poor me) for the next best comfort food I can find – Chef’s Short Rib Grilled Cheese. Gorgeous pinpoints arrive packed with ground, slow basted short rib and white Cheddar cheese.

Chef has added a taster to the plate, too – the Stuffed Pepper with Cheese, which features a Shishito Pepper stuffed to the gills with goat and Monterey jack cheeses and then tossed in a light tempura and flash fried. The Pepper dish is served with two sauces, a garlic and house made mayonnaise aioli and a house made tomato chutney.

Needless to say, we’re definitely off to a great start rolling down the “comfort food” aisle. 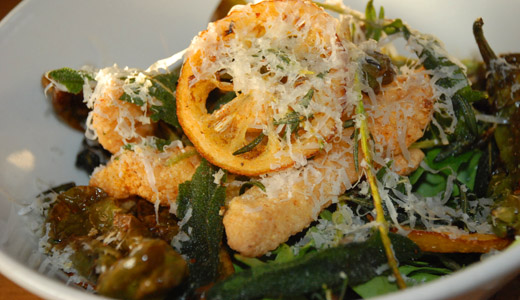 Next up is Chef’s Gluten-Free Calamari. In my opinion, while fried calamari seems like a relatively easy dish to execute, I haven’t been impressed with more than a handful of calamari presentations. For some reason, there aren’t many kitchens that can do this right, let alone do it right as a gluten-free item. Chef Ryan, though, pulls it off flawlessly.

Big chunks of calamari are flash fried in rice flour, then tossed with chilis, rosemary sprigs, sage and lemon slices that he pan-tosses to perfect crispness. The dish again features the garlic/mayo aioli sauce with an added sauce, Harissa Aioli (a North African sauce that features chili peppers, garlic and cumin).

Not to be outdone by its calamari compadre, the Gluten-Free Cauliflower is next to take the stage. Normally not something I would think of as “comfort,” this is awesomely sublime – cauliflower is tossed with a Banyuls vinegar and honey combination, and then tossed with house-made Chimichurri and red chili flakes.

As I wander from 370’s Comfort Food Appetizer Aisle to its Comfort Food Entrée Aisle, I notice that the atmosphere around me is all about comfort, too. While diner ages range from 25 to 65, retro tunes from the 1980s (i.e. Tainted Love from Soft Cell, Good Times Roll from the Cars) have everyone humming along.

Note, if you want to propose to your girl here, you might want to augment with sign language. People are happy here, and sounds bounces and bounds to fill the place.

My server, Ben, is as boisterous and friendly as the atmosphere around me. Somehow, no matter when I visit this restaurant and no matter where I sit, Ben is my server. I adore him, too. A transplant from Illinois, he talks like Fast Times’ Spicoli … with a master’s degree in food chemistry. Ask him anything about the food on this menu, and he is absolutely impeccable, proving that this all-important piece of the puzzle is what makes the entire dining experience worthwhile.

A Most Creative Foie Gras

After California’s foie gras ban was lifted in January this year, I’m not sure that anyone moved faster in Laguna than Chef Amar Santana (Broadway), Chef Craig Strong (Studio) and Chef Ryan to reinstate the popular dish to their menus. All three chefs have always sourced their foie gras from cage-free, cruelty-free farms in the United States, and all three continue to innovate superb foie gras dishes.

In my restaurant reviewing days, I’ve had foie gras served just about every way imaginable, including foie gras and truffle scrambled eggs and a one-of-a-kind, incredible 25-part Foie Gras Martini, compliments of Andre’s in Las Vegas.

Chef Ryan stands at the top of that “innovation” mountain, too, though, with his Foie Gras served on huckleberry pancakes! (Chef changes the Foie Gras serving almost daily, so ask on its preparation.) 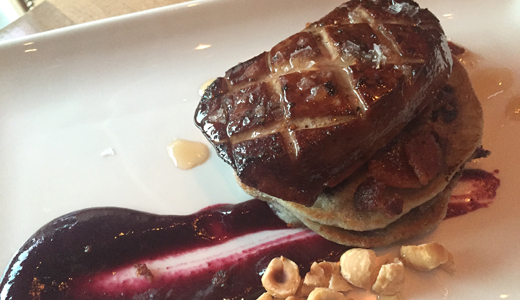 Because of the fat level in foie gras, this dish can go to heck in a hand basket in seconds. 370 Common’s portion, though, arrives perfectly seared atop pancakes layered with thick cuts of crisp, wood-smoked bacon. A reduction of maple bourbon glaze is drizzled atop and in dollops around the dish while a generous swathe of blueberry gastric allows for delectable, heavenly dipping. The toasted hazelnuts add a lovely crunch factor. 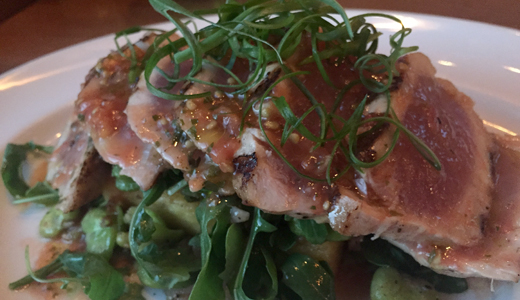 Lastly, I try the dish inspired by Chef’s wife, Mia.

This is a Sicilian-inspired dish, thanks to Mia’s Palermo-based heritage, that first marinades Ahi tuna in the sweetness and spice of garlic, mint and lemon, and then quick sears the tuna on all sides.

A brick of polenta is pan-seared in butter and placed first on the plate and topped with a mound of peppery arugula and nutty, buttery fava beans.

Thick slices of Ahi add to the Jenga puzzle, and a sweet tomato pureé with a sprinkle of micro-chopped chives crowns the dish.

It’s a beautiful marriage, to say the least. (Thank you, dear Mia. I don’t know you, but now I adore you, too.)

Apparently, 370’s innovative menu and lively atmosphere isn’t enough for this Chef. From its drink board at the bar (purchase a drink for a friend and put his or her name on the board for discovery) to its pre-dinner cheese and charcuterie options, 370 Common Kitchen+Drink is filled to the brim with Chef Ryan’s creative notions. Small wonder he’s now on my “favorite people” list. This is a job well done, all around.