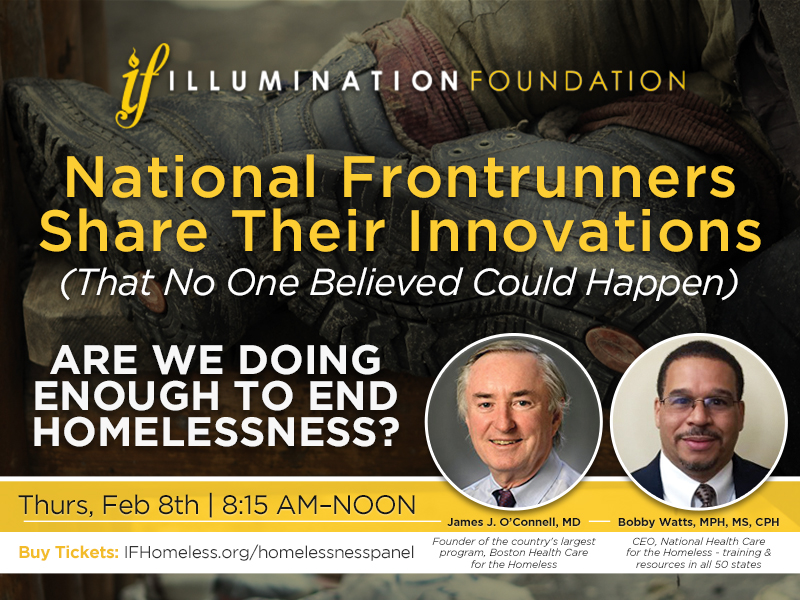 Where will all these people go?

The more important question, though: What’s being done to quell the ongoing rise in homelessness?

National Innovators in a Half-Day Panel

Illumination Foundation, a non-profit entity providing services to break the cycle of homelessness, is addressing that very issue on Thursday, Feb. 8th with a panel presentation:

Purchase the $20 Panel tickets (which include continental breakfast) at: IFHomeless.org/homelessnesspanel

“Orange County is in a crisis situation with homelessness at an all-time high,” says Illumination Foundation CEO Paul Leon. “It’s time for all of us to transition from blame dialogue to implementation of real action solutions. Silver bullet remedies do not exist. Renowned advocates like Dr. Jim O’Connell and Bobby Watts can guide us in the right direction.”

The panel features two of the country’s leading innovators in homeless care, including Boston’s Dr. James J. O’Connell. Known as Boston’s only doctor making house calls to the homeless, he is the 32-year initiator behind national sweeping changes in homeless care.
Dr. O’Connell will be joined on stage by Bobby Watts, CEO of the National Health Care for the Homeless Council. Watts began his work 30 years ago at the New York City Rescue Mission in Manhattan, and has since worked tirelessly with government and private institutions to implement services and resources to all 50 states.

“Coming from New York City, with the largest shelter system and largest supportive housing community, I hope to bring my 30 years of experience – especially concerning the integration of health care and housing – to help Orange County’s work to eliminate homelessness,” says Watts.

“When we’re able to provide housing and comprehensive health care support, we’re finding that the combination is helping us break through the homelessness cycle,” adds Watts. “We’re going to map more of that out in our February 8th presentation.”

In Orange County, the homeless population continues to tick up, with the Illumination Foundation reporting more than 66,600 homeless people in Southern California each year

For those of us accustomed to hearing about homeless issues and seeing homeless people on a daily basis, that appalling number might just drift right past us. The fact is, though, that these are real people … individual men, women and children … many of whom suffer moderate to severe health or mental issues.

Watts and O’Connell were two of the first in the country to begin addressing these health care needs. Now founder and head of the Boston Health Care for the Homeless Program, Dr. O’Connell and his vast team of clinicians work to provide high-quality health care services through 400 clinics in more than 60 locations in Boston.

O’Connell’s team is also behind the world’s first “Vulnerability Index,” initially developed in the 1990s upon recognizing that the homeless death rate was higher than any other group in the country. O’Connell’s Boston-based team was also the first to implement electronic medical records (EMR) for the homeless to better coordinate their care across hospitals, shelter clinics and street-team medical and psychiatry work.

As CEO for Health Care for the Homeless, Bobby Watts’ also oversees and promotes a far-reaching network of doctors, nurses and social workers who share and build upon resources and services to eliminate homelessness across the country.

Again, the $20 tickets for Feb. 8th, can be purchased at IFHomeless.org/homelessnesspanel.