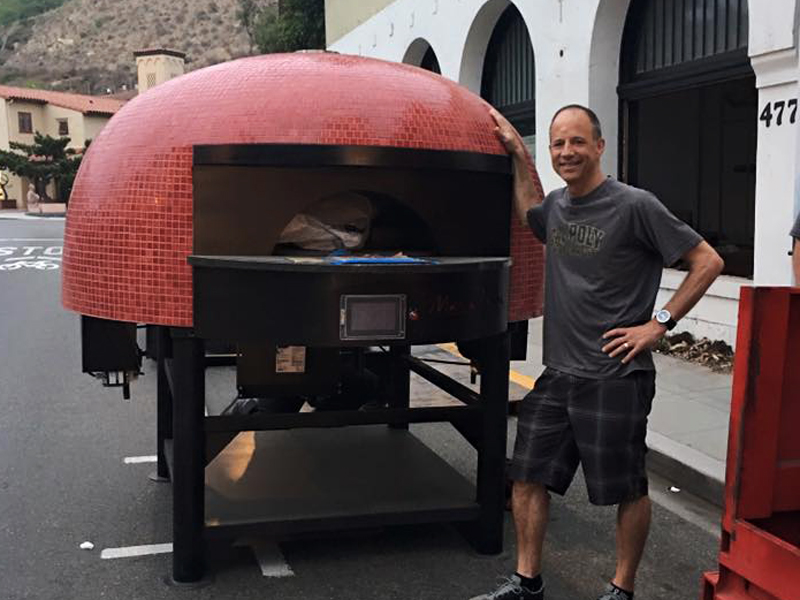 I stopped in today at the Lumberyard and owner Cary Redfearn was grinning from ear to ear. It turns out his oven for his new restaurant across the street (Slice), arrived early Wednesday morning … via forklift.

She was custom made by Maryland-based Marra Forni, top-of-the-line pizza ovens imagineered by Naples, Italy descendants, the Marra Family.

This particular pizza oven is a “rotator,” meaning it can be programmed to fire a large number of pizzas at one time, rotating each through a 90-second cycle for perfect, convection-style baking.

Yes, that’s right: 90 seconds to fire a perfectly finished 11-inch pizza. The oven fires at a mere 700 degrees and (thankfully) does not require any reaching in and repositioning of pizzas during the cooking process.

“It will take more time to assemble someone’s pizza to their specifications than it will to cook it,” say Redfearn.

Gourmet Pizza in 90 Seconds
Slice, which is in final construction phase directly across from Redfearn’s popular Lumberyard restaurant, hopes to open by the end of September. It is primarily intended for a cash-and-carry audience, including busy Laguna Beach residents who want to quickly order gourmet pizza their way and leave with their pizza prize – boxed and ready to go – in a matter of just a few minutes.

During the months of construction, Redfearn has perfected his secret pizza sauce, and will be topping his pies with organic, locally grown ingredients.

While a “pizza of the day” will be offered, patrons will be able to walk up to Slice’s counter and walk through an “assembly line” of ingredients to build their own pizza, much like a Subway sandwich shop.

How an Oven Becomes the Diva of the Construction Site
“We couldn’t bring the oven in until we had all the proper tile laid on the floor and wall behind,” says Redfearn.

“But, we couldn’t start the finish of the walls and interior until we had the oven in place because it’s just so enormous. So, it’s all been a timing issue.”

Early Wednesday morning, before traffic began to pile onto Forest Avenue, a giant forklift arrived with Redfearn’s treasure. For the next hour, he and the forklift team worked to shoehorn the enormous pizza oven through the front (note: historical) windows of the store.

“Even a quarter inch in the wrong direction, and we would have been replacing all our plate glass windows, “says Redfearn. “It was quite an amazing delivery.”

I, for one, am looking forward to the pizza this new Slice resident delivers. The end of September can’t come soon enough.