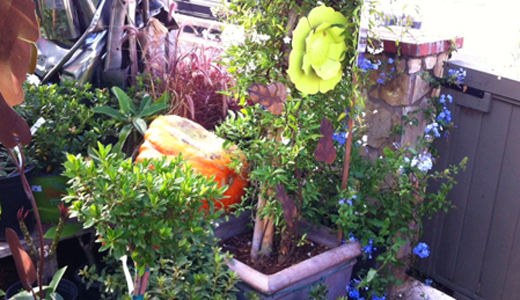 When life is at its sunniest in Laguna Beach, we leave it to Laguna Nursery to tell us when October has arrived … the Great Pumpkins take their official positions.

Charlie Brown’s Great Pumpkin holds no candle to the enormous pumpkins brought in to “liven up the decor” by Owner Ruben Flores. For days, his workers struggle to push these enormous pumpkins to the top of the nursery’s perimeter pillars …

And every year, vandals push them from their posts, splattering pumpkin in all directions.

Initially it began as a one-off sort of thing, and Ruben figured a Great Pumpkin or two might have just been situated on its post incorrectly. (You know, after all that sitting, even a Great Pumpkin has to do some shifting.) Over the years, though, the vandalism has gotten more prevalent … so prevalent now that the Nursery has taken to naming the Witching Month of October the Perplexing Perennial Pumpkin Predicament.

Folks, this is not Humpty Dumpty here (who seemed a little precarious in his demeanor anyway). These are Great, Magnificent Pumpkins who were seriously committed to growing themselves to extra large proportions. To be included as the primary decor of a place like Laguna Nursery has likely been their soul life’s wish since they were just tiny, green sprouts.

Why in the world, then, would you push these Great Pumpkins from their kingly (if not somewhat temporary) throne? These pumpkins are like butterflies – they only have so much time. Pushing them from their posts is much like capturing a butterfly in your mother’s canning jar. It just ain’t right.

For now, the Nursery can only heighten is security measures, and the Laguna Police can only add in several rotations of Pumpkin Patrol.

To marshal community support in the round-up of these Pumpkin Perps, Owner Ruben Flores is offering a reward this year: A hand-carved wooden walking cane from Africa to help that possible wayward pedestrian (albeit 8-feet tall) from accidentally falling into these pumpkins on their posts. (The cane comes in mighty handy for blistering the backsides of said Pumpkin Perps, too, now that we think about it.)

May our fallen Great Pumpkins rest in peace.