A Tale of Two Breakfasts 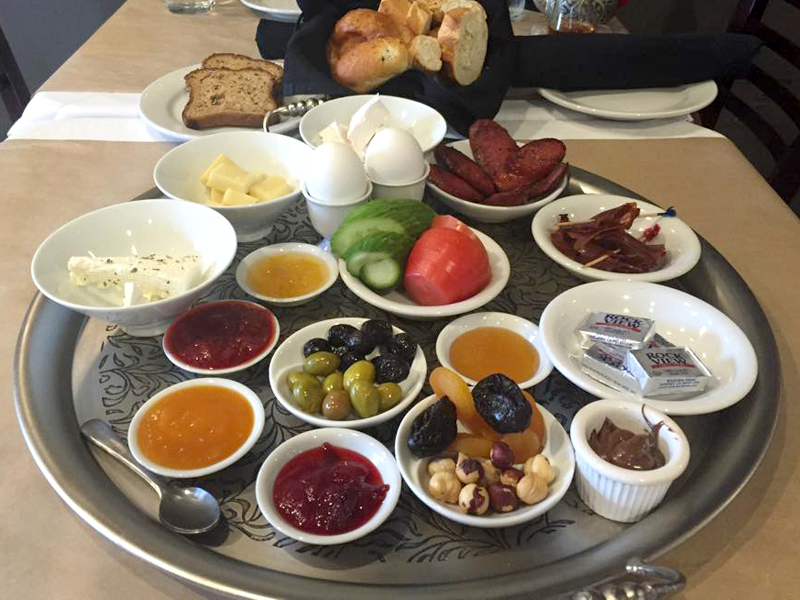 Dining out for breakfast on the weekends is one of my favorite treats. Recently, I finally ventured out to Harvest at The Ranch Laguna Beach and GG’s Bistro for the first sit-down experience I’ve had in many months.

A Peaceful Sojourn at Harvest

Prior to COVID and nearly every Sunday morning, I would walk down the beach to Aliso Creek and cross through the tunnel to The Ranch. 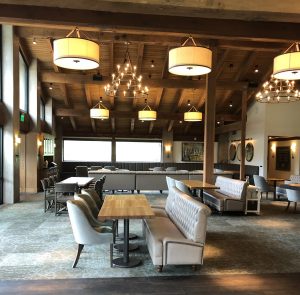 The staff knew I preferred the corner table in the bar closest to the golf course. My server, Manny, would usually greet me at the table with my decaf cappuccino already in hand. I came to adore The Ranch’s Harvest Restaurant for that early morning peace, which allowed me time to think, dream and plan my week ahead.

I ate my “last breakfast” at Harvest on a Sunday morning, just days before the March shutdown. Since that time, The Ranch’s personnel have done an impeccable job abiding by the new rules of play. They began serving food again with their patio upstairs, and then quickly expanded to the larger patio that fronts their banquet room below. 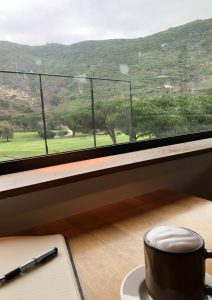 A Harvest Cappuccino with The Ranch backdrop

When I visited Harvest for the first time indoors last week, it was comforting to see that they’ve followed the same protocol, distancing tables and diners with aplomb.

It felt like old times. The breakfast menu was exactly what I recall from earlier days, with everything from Bagel and Lox to their crazy-decadent Cinnamon Roll and my favorite Breakfast Burrito. 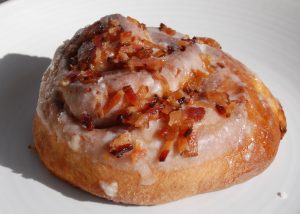 The Cinnamon Roll for two at Harvest

The Harvest Cinnamon Roll was first created by The Ranch’s first pastry chef, Mary Catherine. Thankfully, she believed in bacon as a priority in one’s diet, and this is the only cinnamon roll I’ve ever found with chunky bacon sprinkles. It is an awesome treat that I reserve for special occasions!

My usual – The Harvest Breakfast Burrito – is a giant meal, stuffed with house made carnitas, scrambled eggs and Oaxaca cheese. I knew it was too much to handle that morning, so I settled, instead, for something I hadn’t tried – the Country Omelet. 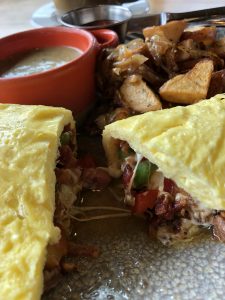 This showed up as a giant, too. The Country Omelet arrives with a veritable pile of potatoes and choice of toast. The egg concoction was stuffed to its perfectly fluffy edges with smoked bacon, country ham, peppers and aged white cheddar. It was fabulous and oven-hot, and I managed a scant half of it before submitting to a take-out box.

Throughout the craziness of COVID, Francesca Gundogar has remained unperturbed. Cool as a cucumber and always smiling, Francescko is the eye of this year’s hurricane.

All these long months, Francesca and husband, Ragip, have maintained a significant take-out business while going through the motions of closing, opening, closing and re-opening their patio dining. 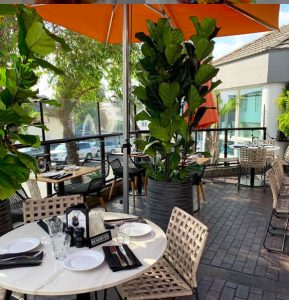 But what shows up is quite the delectable treat. The ingredients are super fresh, the eggs are whipped light beyond belief and the hash browns are officially the Eighth Deadly Sin. They are buttery, rich and crisped just perfectly.

My go-to has always been GG’s amazing Turkish Pan Fried Eggs served in their own skillet with Turkish sausage and those amazing hash browns.
If you (like me of late) are on more of a health kick, try the glorious Mediterranean Plate with cucumbers, feta cheese, Kalamata olives and Mediterranean stye Roma tomatoes. 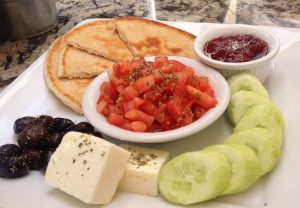 If you arrive with a friend or two, you simply have to try the GG’s Sultan Tray. It’s such a beautiful homage to the Gundogars’ roots in Turkey with a giant tray devoted to Turkish cheeses, olive, hardboiled eggs, Turkish sausage, organic Turkish honey and all sorts of nuts, dried fruits, veggies, olives and more.

And, of course, you simply can’t pass on the Turkish coffee, a fresh, strong brew  that’s actually how and where coffee began in the first place. (I have an entire blog article devoted to the history of Turkish coffee – just search “turkish coffee at my site.)

Even in this rather frantic time, GG’s Bistro patio offers that rare peace we all need a moment of. It’s a 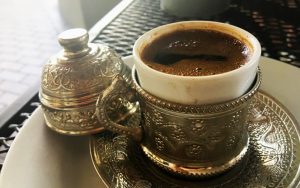 beautiful way to greet your Sunday, especially when you’re worn out from the rush of your week.