A Tale of Two Pot Pies 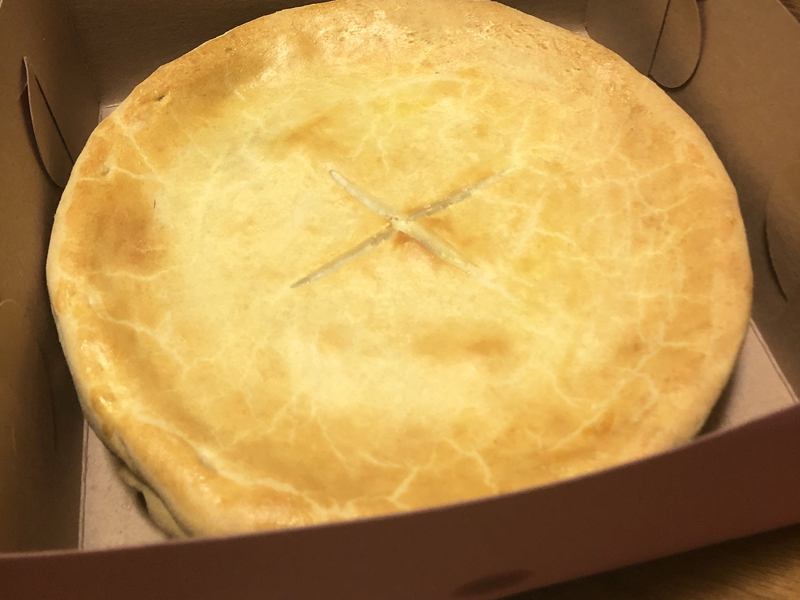 While it seems that winter may never arrive in Laguna Beach this year, two of our restaurants are certainly ready with their own homemade versions of Chicken Pot Pie.

My longtime favorite, The Lumberyard Chicken Pot Pie, has been on the menu since the restaurant opened its doors here. Owner Cary Redfearn says it’s a perennial best seller, to the point of remaining on the menu year-round after patrons howled plaintively about its seasonal removal.

When I saw that Chef Greg at Harley Laguna Beach had created his own version of the same splendid item, I thought I’d spend an evening doing a comparative tasting.

The humble pot pie is so famous that every country out there tries to take credit for its creation. Some say it originated in the Neolithic Age, around 9500 BC. Archeologists claim they’ve found remnants, which makes me wonder about their chefs’ flaky crust-making abilities in those days. Many will say it originated in Greece with an open pie shell they call Artocreas. The pie seemed to travel well as Romans were next to adopt the pie, nicknaming them “coffins.”

One the British picked up on the pot pie, though, it was game over. From the 15th century forward, the chicken pot pie experienced a resurgence in popularity. largely due to its talkative Brits. The pie hit the new Americas when settlers in the Pennsylvania Dutch region began producing “bot bois” that threw out the edging crust and, instead, opted for dumpling-style noodles inside.

Clearly, everyone loves a pot pie, even those Neolithic types. It’s no surprise, then, that both Lumberyard and Harley are enjoying a brisk business in Pot Pie sales.

I ordered mine as a take-out item, which required a different type of delivery from the kitchen.

“Normally, we bake the crust on top of the pie for dine-in,” said Redfearn. “But you can’t do that when it’s in a to-go container, and the items require two different types of heating if you need to reheat it. So, we send it deconstructed.”

True to his word, the steaming chicken pot pie innards were housed in a large round container with the thin, baked pastry carefully tucked away in separate wrapping. The “single serving” would be plenty for two people, (Just remember that people like me can be possessive about their chicken pot pie, so keep that in mind when ordering.)

I ordered a single serving of the Lumberyard’s Classic Caesar Salad, too, which was more than enough for two. It arrived crisp and tossed with plenty of croutons and cheese. 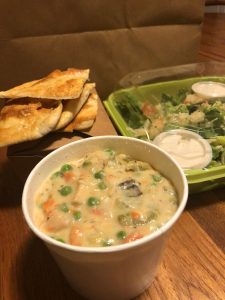 In my opinion, pot pies of any kind have to land on the right herb-y, brothy blend; too much carrot or not enough onion, and it all goes wrong. Too much seasoning or garlic additions beyond a scant level will turn your anticipated pot pit into a salt lick. If the creamy broth is too runny, it’s time to turn to the tortilla chips in your pantry. If, on the other hand, the broth is too thick, it will feel like coagulated concrete in your stomach a half hour later.

This is a delicate skill, my friends.

In all my years of ordering Lumberyard Pot Pies, they’ve never gone wrong. This proved the case again with heaping mounds of love, even if I wasn’t the greatest construction worker on piecing it together.

So much of Chef Greg Daniels’ great cooking style comes from the homespun cooking he grew up with. Nothing he has ever introduced has ever felt or tasted cookie-cutter, and nothing has ever reminded me more of my own Grandma Molzahn than Greg’s new Chicken Pot Pie.

My Grandma thought she was just a utilitarian cook for the Nebraska farm she and my Grandpa owned, but she had a crazy-amazing gift in the kitchen. To this day, I can’t replicate a darned thing she created from scratch, even after working side-by-side with her in the kitchen to learn every step.

Grandma Molzahn was practical. She was cooking three solid meals a day; she didn’t have time to create single-serving-deep-dish wonder. When it came to her chicken pot pie, she’d simply whip out the flour and butter, roll out a pie crust, ladle the chicken stew inside and roll out another pie crust for the top.

When I unpacked Chef Greg’s Chicken Pot Pie, I shouldn’t have been surprised. It was an entire pie, still in its pie plate, and in a pink pie box, too. 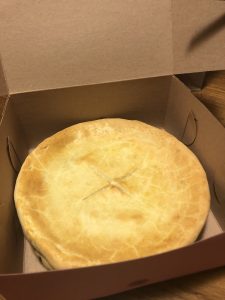 Granted, when I had first ordered the pie, I was a little surprised at the $25 price tag. I had no idea, though, that it was an entire pie. This fabulous treasure fed me for the next four days. 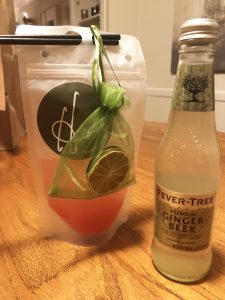 On this order, I added a Golden State cocktail from Greg’s renowned mixologists. A mix of vodka, elderflower, grapefruit and ginger beer, the mixologist trotted out to the sidewalk to explain to me that the bagged elements go in the glass first, followed by “a topper of ginger beer” along with the dehydrated lime slice (very important). I did a better job at constructing this “to go” item.

Once again, Chef Greg has hit all the high points for my Chicken Pot Pie Scoring System. It was a perfectly smooth, creamy, steaming blend of chicken, veggies that were just a hint al dente, and crisp winter seasonings.

“I just wanted to create a very traditional chicken pot pie that was familiar for people,” said Chef Greg. “It sells out every evening.”

Comfort Food for an Uncomfortable Season

Just because you can’t dine-in at our Laguna restaurants shouldn’t stop you. All of our restaurants are happy to serve outdoor diners while fulfilling loads of take-out orders at the same time. And, believe me, each of our chefs is doling out everything you need to get through this season. Be sure to enjoy those Chicken Pot Pies! 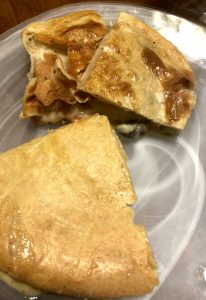