A Week of Eating With my Visiting Friend 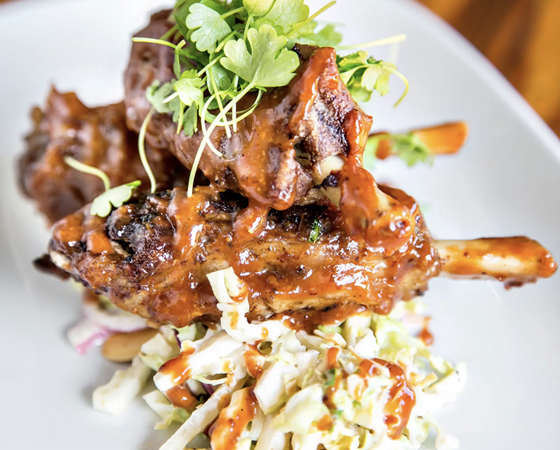 Two weeks ago, my best friend from Denver (Diana) was in town. People are always asking me where I would send a tourist if they had just a few days here, and to that I always reply, “It depends on what the tourist wants to experience.”

Diana wanted to experience the “local vibe” as I experience it. So, on the day of her arrival, I started in my own SoLag hood, Coyote Grill. Seriously, folks, you can’t come to Laguna Beach and miss out on some of our neighborhood favorites.

Steve made us margaritas and trotted out later to catch up on restaurant gossip and offer a shot of new tequila. Meanwhile the kitchen rolled out my favorite, the giant chicken burrito (minus beans and added green sauce to make it “wet”). It was the start to a very good week of eating.

She Ate Salads, I Tried Everything Else

On Memorial Day, we joined the throngs downtown, stopping at GG’s Bistro for my favorite sangria in town. 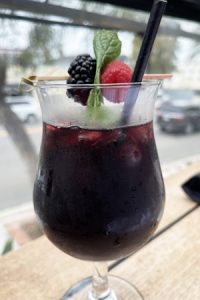 GG’s Sangria is an awesome blend of red wine, cherry brandy and loads of infused fruit. 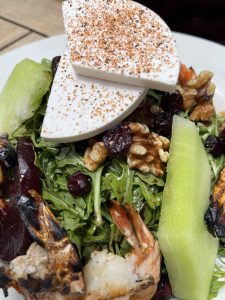 Tuesday was a visit to Sapphire.Cellar.Craft.Cook for a late lunch. While Diana dug into another lovely salad, I opted for the appetizer, Lemon Thyme Confit Kurobata Pork Ribs. These were luscious, fall-off-the-bone nuggets in saucy bourbon barbecue glaze. It was all I could do to not order another helping. As we dined, we chatted with Operating Partner (and great chef) Chris Hutten. It turns out the Sapphire team was readying to celebrate the restaurant’s one-year anniversary already. I’m sure the year ahead will prove less tumultuous than the first

On Wednesday, we moseyed down the sand from the Surf & Sand Hotel to the longtime local favorite, Zinc Cafe & Market. Owner John Secretan was actually there (I haven’t seen him in months), so we caught up on his various enterprises as Diana and I enjoyed our vegetarian breakfast items.

I chose my old favorite, poached eggs on toast, while she opted for the daily quiche offering with a side of fruit salad. Service was quick and friendly, our dishes were delicious, and the patio was its usual people-watching pleasure. 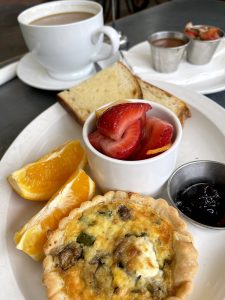 The following day before her departure to the airport, Diana and I waddled over to another favorite mainstay of mine – Harvest at The Ranch Laguna Beach with Chef Kyle St. John at the helm.

Of course, Diana chose salad. Neither of us, though, expected the still-steaming salmon slab atop a mound of fresh greens and herbs. It had to be the largest serving of salmon I’ve ever seen on a salad. She noted it was spectacular.

I, however, was involved in my own spectacular dish, my first try of the Grilled Salmon Sandwich. Chef grills Nordic Blu salmon and tops it with kimchi slaw, miso aioli, sweet soy glaze and crispy fried onions. Sounds rather simple, I know, but it was simply unbelievable.

In mere minutes, this rather unassuming sandwich bulldozed its way past any other sandwich contender in Laguna Beach. In my book, it’s taken the crown, the throne and the singing minstrels, too. This sandwich is a game changer. 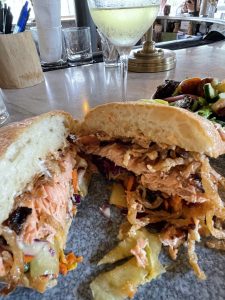 Since Diana’s departure, I’ve done my best to follow her lead – salads, salads and more salads. This weekend, though, I stumbled into Chef Rainer Schwarz’s new spring menu at Hendrix, his Ocean Ranch-based restaurant. While it’s not in Laguna Beach as are his first two restaurants (The Deck and Driftwood Kitchen), you deserve to hear about this heady and delicious welcome for spring. It was a perfect stop after seeing “In the Heights” at Cinepolis.

Check out my almost daily foodie finds in my social media platforms at Instagram and Facebook. Our Laguna chefs and owners continue to outdo themselves – be sure to let them know!