Ain’t No Blues at ROUX! 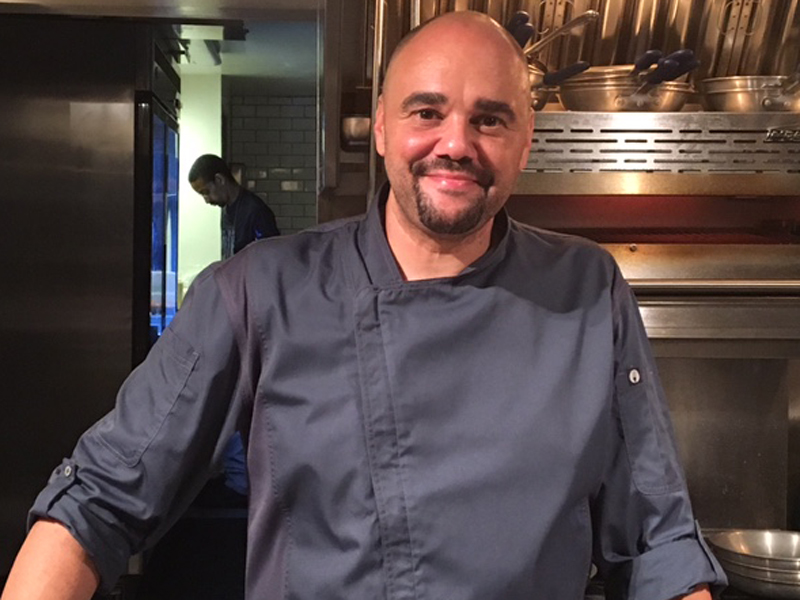 Obviously, the tiny restaurant space at 860 Glenneyre Street has some serious mojo going on. For years the host to Michael and Toni Leech’s well-loved Cafe Zoolu, she re-invented herself for a soft-opening last weekend with a soft-spoken Chef and a rowdy rabble of happy Laguna fans.

Now, she is ROUX. 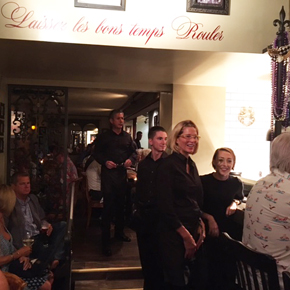 I don’t believe it’s fair to do full-fledged reviews on a new restaurant until she’s gotten her legs under her. I’ve been on the other side – the restaurant development side – too many times! No matter how great all the pieces are, and no matter how ready you think you’re going to be, the initial opening of a restaurant is just too chaotic. (Actually, it’s more like a Category 5 hurricane. You do your best to take cover and ride it out.)

So, this isn’t a review of my dining experience on the second night of Roux’s existence … it’s just an observation on what I think the future holds for Laguna’s latest culinary addition.

In short, ROUX has a long and happy life ahead of her.

Significantly spruced with the glow of New Orleans about her, ROUX still bears the trappings of all that has been wonderful with previous chefs there – namely, the awesome Chef’s Counter that provides an unstilted view of imaginative food in the making. I sat myself directly across from the Co-Owner Chef himself and enjoyed two hours of spying on practiced greatness in action.

Chef Norm Theard is a classically trained French chef, which becomes immediately apparent as you see how he runs his French-inspired kitchen – rarely do any of the cooks need to step out of their 4-foot “well” of specificity and, for the most part, they work in breezy, friendly silence. 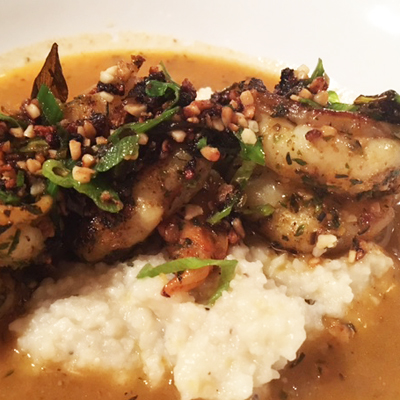 This is going to be a locals’ hang out right from the start. For one thing, longtime residents and Saloon owners Michael and Cindy Byrne are co-owners in this project and I can’t think of a person in the 5-state area who doesn’t adore this couple. Secondly, ROUX still has enough of the old Café Zoolu vibe to assure locals that the building’s appreciation of local love is still in play. Thirdly, there’s Chef Norm Theard who’s relocated to Laguna Beach because he’s committed, man. As local restaurants go, that’s always a sign of good will and longevity.

As the onslaught of family and friends ordered every imaginable thing on the menu, the team worked methodically and quickly, producing a raft of truly innovative dishes. New friends sitting next to me ordered the ROUX Salad tossed with Pork Andouille dressing (that’s a first for me).

Many people believe that a restaurant’s greatness can be decided in the tale of the soups, but when I have the option, I think a chef’s proclivity can be just as easily determined by trying his or her GRITS. I dug into Chef’s Shrimp & Grits appetizer, the grits melding with bay leaf, garlic, cream, thyme and Yvonne sauce (typically a popular Orleans-instituted sauce of butter whisked to brown, and then removed from heat in the nick of time for added lemon juice and red wine vinegar). Everything in the dish was perfectly cooked and just the right temperature (grits are fussy, man).

My neighbors allowed me a photo of their Hanger Steak before mopping the plate clean. It’s a hearty portion of grilled steak atop garlic sweet potatoes, Ratatouille (a painstaking dish in and of itself), and a drizzle of parsley butter sauce. Noting that this will be the item I try on my next return, I order the ROUX Catfish, which claims to be Chef Norm’s favorite. (When in a Hurricane 5 soft opening situation, always opt for the Chef’s favorite.) 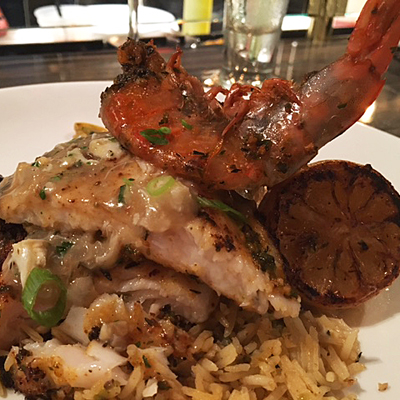 Chef Norm imports this catfish because it’s “lighter and sweeter” as opposed to what some would term “muddy” tasting. Personally, I think this guy could dredge the Mississippi for catfish and it would still be spectacular. Simply sautéed in olive oil and secret spices, laid on a bed of Creole rice and Ratatoulle, and crowned with shrimp, lump crab and browned butter sauce, the entire entrée simply melts in your mouth.

Alas, I arrived after the Blueberry Bacon Goat Cheese Cobbler had sold out. I settled instead for Bread Pudding with Bourbon Sauce and am sure I emerged the dessert winner of the evening.

As I said, this isn’t a formal review, just an opinion of her first howdy-do to the community. As her namesake proclaims, I think ROUX is already a foundational element to Laguna’s growing culinary greatness.