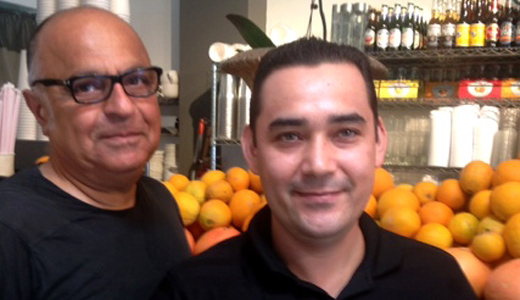 Believe it or not, more than 35 Laguna Beach restaurants serve up breakfast at least two times a week. That’s a whopping number of options, but when people ask me for one of the BEST breakfasts in Laguna, I answer: Anastasia Cafe.

Anastasia Cafe’s is a gracious, sophisticated local favorite that offers one of the most unique breakfast menus in town. It totes an awesome lunch menu as well, but that’s worthy of its own article. Today, I’m talking breakfast.

Anastasia is a combination upscale clothing boutique and restaurant (mighty handy to peruse while you’re waiting for your breakfast to arrive). Owners Zore and Amir Gharavi came to Laguna in 1981, having initially started in the clothing industry in France more than 20 years prior. The couple initially set up their first Laguna clothing store near the Surf and Sand Hotel, and enjoyed immediate success with the high-end designer names they provided.

Several years later, Zore and Amir decided to build at the corner of Ocean Avenue, dividing the new space to house both retail and café. In 1997, Anastasia Cafe opened its doors, and Laguna hasn’t been the same since.

Ask Amir about his menu selections and he simply shrugs, “We created a menu from what worked in our cafés in L.A., and most of the items today are still from that original menu. So … I guess you could say it worked here, too.”

This is one of the smaller understatements of the modern era. Anastasia Cafe offers an absolutely sublime breakfast menu of perfectly poached egg dishes, omelets, frittatas and their killer best seller, the Pain Caramel Toast. “Definitely our best seller by a long shot,” says Enrique Sota, who began as a dishwasher in 1997 and now is Anastasia’s General Manager.

If you’ve had the temerity to try this “French toast” colossal dish, you’ll be enjoying hearty chunks of flash fried Ciabatta bread, served with caramel sauce, candied walnuts and powdered sugar (because you need those few extra calories the powder provides, of course).

Eggs Your Mother Never Made 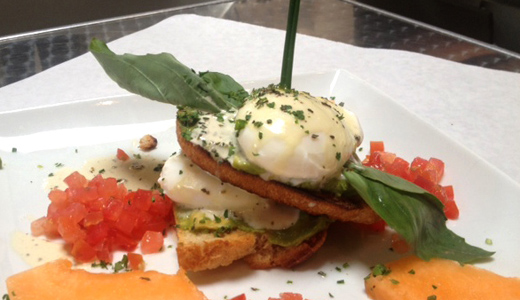 For the record, the egg dishes Anastasia Cafe creates are works of art in their own right. These aren’t skimpy dishes, either. Many dishes can easily be shared, but order a different dish for every one in your party, as there’s just too much goodness to stop at one order.

My favorite, Eggs Anna, proffers two poached eggs atop country bread and a pile of fresh arugula and shaved prosciutto. The crown is drizzled in thyme sauce and surrounded in chopped, fresh tomato and cantaloupe.

The most popular egg dish, though, is Eggs Laguna – two eggs served with a mound of fresh basil and avocado, and drizzled again in Chef Amado Lepe’s thyme sauce.

The Daily Specials are Definitely Special

The head chef here for 12 years, Chef Lepé, arrived from Cedar Creek, and is ever-inventing new specials and tweaks on the fabulous menu.

“We don’t mess much with the popular menu items because our regulars expect certain dishes to always be there,” he says. “But, over time, I’ve added lean chorizo that we make right here in-house, and items like Huevos Rancheros” (his favorite).

Further, Chef Lepé and his second in command, Eric Campos, provide three off-menu breakfast specials and at least another two specials for the lunch crowd.

I’ve tried all three, and they’re all quite worthy of their daily title, but I love the Chorizo Scramble. Sheer heaven. I’ve had this dish twice, and have managed to tackle about one-third of the heaping serving before giving up and boxing the rest. It serves up quite beautifully as a leftover, I assure you.

A couple years ago, and after repeated requests from clientele, GM Enrique suggested that the Café add fresh juice combinations to the menu. The team put its collective head together to devise six “introductory” juice drinks. 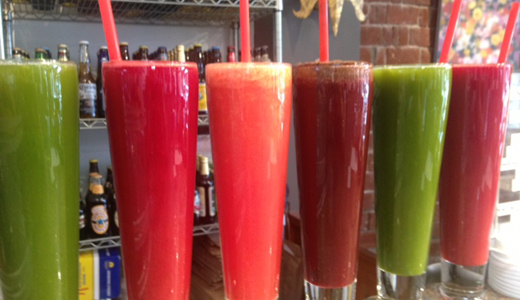 “They started selling out right away,” says Enrique. “We could hardly keep up with the demand – it was very surprising. So, we haven’t changed any of the recipes at all, but we have put more prep cooks on the line to handle the orders.”

For once, my favorite juice blend is actually the best seller, too – the Black Diamond. It’s a gorgeous mix of ginger, apple, spinach, lemon, parsley, beets and celery. The juice combinations are as inventive as their names (Vampire, Poison, Sun Dry, Fire and … well … the prosaic “Green Juice,” which is such a great combination of ingredients that it doesn’t need to have a fancy name, I suppose.)

If you’re familiar with Anastasia Cafe, you know this is not a turn-and-burn kind of eatery. Don’t expect your egg dish to arrive, slightly slopped, in less than three minutes. During weekend days, you may wait 10 minutes for a table, and another 15 minutes for your plates to arrive, so sit back and enjoy the people watching. When I join friends at Anastasia’s, we like to meet on a weekday morning, or at about 8:00 a.m. on weekends, well ahead of the crowd.

After his 17 years here, GM Enrique says the Café’s annual year of clientele could be split almost exactly in half.

Seriously? How could we stay away?