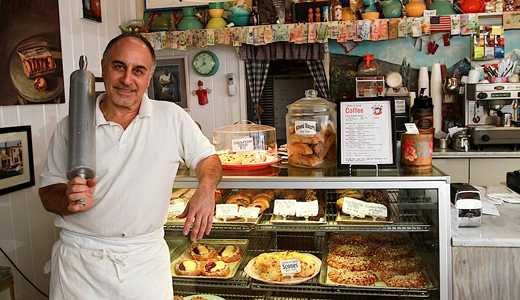 As his regulars cross the Andree’s Patisserie threshold, he is already bagging their favorite item.

He greets each customer with a happy grin, and gestures with the bakery bag in hand, filled with flaky goodness. This person always wants a Bear Claw. That one prefers the plain croissant. This one is in for his turkey sandwich (no cheese).

As I step up to the worn counter, it is only my third visit in as many months. Ron eyes me momentarily and says, “You’re the decaf Au Lait with not so much milk, right?” I grin and feel important. Heavens, I think … I drop into a large chain coffee shop in Dana Point at least three times a week, and they still look at me as if I’m a newcomer from Kansas.

For Ron Reno, sole proprietor of Andree’s Patisserie, this is what running a small town bakery is all about. “I have an appreciation for the people who choose me,” he says. “It’s important that every person who walks in my door knows that.”

For 32 years …1,636 weeks … and nearly 10,000 days, Ron Reno has been mixing, baking and serving his famed pastries and coffee in this Laguna Beach historic location.

He is, quite literally, chief, cook and bottle washer. On the rare occasions that he’s chosen to take a weeklong vacation or been forced into a 4-week leave for ACL surgery, he simply closes his blue door and attaches a note to its front with the date of his return.

Ron Reno is, otherwise, the one and only person you will see at Andree’s Patisserie, from 7:35 a.m. to about 2 p.m., every day of the week but Sunday. On Sunday, Ron rests.

The Bakery With the Robin-Blue Door

Andree’s, with its blue awning in the tiny alley behind what is now Selanne Steak Tavern, has seen thousands of people cross its threshold. Initially, the small bakery was put in place in the 1940s as an auxiliary baking kitchen for the first restaurant that stood in Selanne’s location,Andree’s. Its namesake – the independently minded woman, Andree Davis – believed that every restaurant’s foundation stood upon the quality of its baked goods. While she had an executive pastry chef and staff in place, she was often seen in the bakery’s kitchen herself, mixing up her famed steamed pudding. In 1962, she introduced her bakery to Laguna Beach by officially opening to the public.

When Ron Reno first heard of Andree’s Patisserie, he was a new graduate in 1979 with a 2-year baking school certification under his arm. Where most people would not wish to engage in an occupation whose workday begins at 4:45 a.m., Ron had quite the opposite opinion.

“I decided about halfway through college that I wanted to transfer to baking school,” says Ron. “Baking just seemed like a fun thing to do. People are always happy when they come into a bakery. It’s a happy place to be. Who wouldn’t want that job every day?

At that time in 1979, one of Ron’s teachers had been moonlighting at the then-downtown Laguna Beach bakery, Renaissance, and hired Ron to take his place at the all-night job. For two years, Ron worked the graveyard shift, endlessly rolling, twisting, pouring and baking every delectable item from donut holes to towering wedding cakes.

In 1981, Ron heard that the owner of Andree’s Patisserie was looking to retire. He hot-footed it over to the blue awning storefront and agreed, as a term of sale, to learn how to bake the man’s “family recipe” Lemon Squares and Copenhagen Squares. To this day, the lemon squares are offered daily, and the Copenhagen – a puff pastry bottom with rich custard and Danish pastry on top – makes its appearance every Saturday.

“It’s important to pay respect to a baker’s lineage,” says Ron. “At that point, though, I had developed several of my own favorite recipes so, for the most part, I rolled my program into play.

“The former owner’s muffins were good,” Ron notes as an example, “But I use buttermilk and honey in my muffins for more moisture and texture. So, it was a combination of carrying the tradition along, and improving on pastry favorites to create my own signature.” 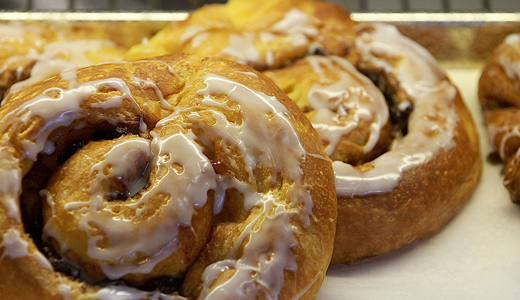 Every pre-dawn morning, Monday through Saturday, Ron bakes “271 items” for weekdays, and doubles the amount for Saturdays… A variety of muffins. Three kinds of croissants. Three kinds of cookies (Almond Biscotti counts as one). A crowd of Danishes. The inimitable Bear Claw. Elephant Ears. Three kinds of sandwiches, their ingredients piled high inside freshly baked slices of Ron’s secret recipe potato bread. The baked riches neatly stack themselves, shelf upon shelf, readied for another day of happy buyers.

Longtime fans will call from L.A. to have Ron set their favorite pastry aside. A woman from Brea drives into Laguna Beach to pick up a Bear Claw, and then beelines back to Brea – it is her only stop. Once a week, another woman stops in for a loaf of his potato bread. Ron learns his clients’ schedules and timetables, welcoming clients who troop in for their annual visit from Europe, and prepping 16 sandwiches each workday morning so that they’re ready for his usual crews. “There’s nothing like eating a pastry or cookie that was just baked that morning,” he continues. You just owe it to yourself … it’s part of what makes life great.”

“Old Friends” at the Holidays

At the holidays, Ron’s faithful followers spread the love by buying up hundreds of his fabled holiday cookies and pies to share with family, coworkers and friends.

Freshly baked cutout cookies with thick frosting shoulder their way into the store’s pastry bins at all the major holidays, even the Fourth of July. He creates cookie stacks in cellophane wrap, and they disappear as quickly as they’re bagged and gift-tied.

Even when it’s pie-making season, Ron never resorts to electric appliances or mixers to mix his dough. “The key to great dough is to never over mix,” he says. “I might start with a mixer to create a crumble, but then I work the dough by hand. You have to feel the dough in your hands to get a sense of it. You have to know how “too wet” or “too dry” feels like, and then know how to scale your ingredients in each batch to create that perfect consistency. There’s just no way you can do that with a big commercial mixer,” he says, adding a tiny shrug.

Where many Laguna Beach bakeries have been vanquished by larger commercial organizations, and where bakeries everywhere have come to rely on third-party sourcing to fill their daily pastry bins, Ron Reno will continue to wake at 4:00 a.m. and roll his doughs by hand until he’s simply not able to perform the work any longer.

“I can’t imagine retiring,” he says. “Last year, when I had ACL surgery, I spent four long weeks sitting on my couch, watching each day go by. I’d watch the light change by degrees as it made its way across my backyard until it was dark. I’d go to bed, and I’d get up again to go sit on the couch. It was my own personal Groundhog Day movie.”

“This place …” he gestures to his pastry bins, the window counter with its sentry stools, “This place here in Laguna Beach is the movie I want to see every day of my life.”

“Laguna Beach offers this unique niche of people who are doing things in a different way,” he continues. “So many people here approach life from a different angle and they’re doing it successfully. They’re interesting …they’re engaged in life … they have great stories to share,” he says. “That’s the movie I get to be a part of every day. I wouldn’t be anywhere else, and I wouldn’t have it any other way.”