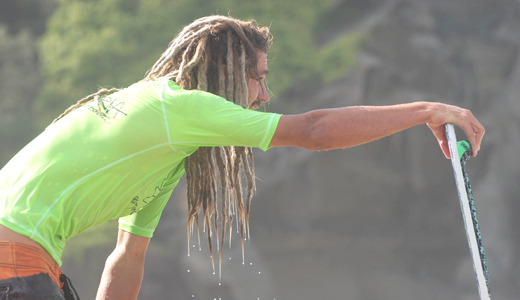 For the first time in years, the UST’s last skimboarding pro tourney of the year took place under blue skies and in warm water temps. And, also for the first time in years, the Balboa Skimfest finally crowned a kid from “the other side” … Georgia, that is. Austin Keen took down reigning champ and Laguna Beach local Sam Stinnett, and actually battled in finals against a fellow southie, Perry Pruitt from North Carolina.

At the Newport Peninsula Pier, the Balboa Oktoberfest is one of the two largest skim contests in the year (grandpappy, “The Vic,” is the other here in Laguna Beach in June). More than 100 pros and another 100 amateurs showed up this last weekend for a fast-moving format that introduced man-on-man quarter finals instead of the usual 4 or 5 in the water at the same time.

Most onlookers agreed that the final between Keen and Pruitt was neck and neck, but the Exile boarder pulled it out for the glory and the gold. Stay tuned for more pix from this great skim event.