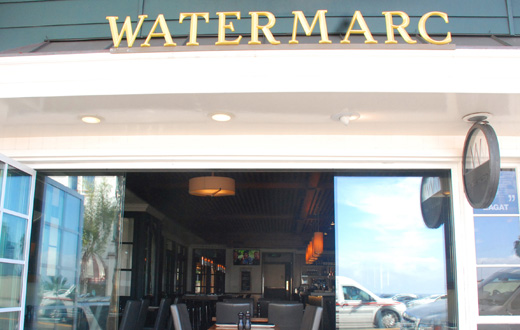 When Watermarc opened its doors, it was 2009 … the depths of the worst recession this country had experienced in decades.

“I knew we had to make a major shift because people were just spending differently,” says Chef Marc Cohen. “Instead of committing to $40 for one entrée, they wanted more choices so that they could try a lot of different flavors. It gave me this great opportunity to build an entirely new menu.”

Known for his successes at Opah and 230 Forest, Chef Cohen began putting a menu together of smaller plates with big taste. Pulling in his talented Sous Chef from Opah, Kiel Anderson, Cohen innovated a menu that was a hit from Day One.

Today (and six years later), after even more change-ups in the Autumn Menu at Watermarc, the “Grazing Menu” features 16 small plates that run the gamut from Crab Cakes to Fried Goat Cheese and Char Grilled Octopus. The menu continues with a hearty selection of soups, salads and entrees, along with a separate menu of superb hamburger options (duck confit and lump crab cakes as add-ons) that are 50% off until 5:30 p.m.

“Our Autumn Menu was easy to put together,” says now-Chef de Cuisine Kiel. “Over several months, we offer a new ‘grazing’ and entrée special each night and, as people try it and give us feedback, it helps us really dial in what our next seasonal menu will offer.”

While nearly half of the new Grazing Menu items are new to the Watermarc Autumn Menu, I select the one that … gee … has been a longtime bestseller since the day the restaurant opened.

“The Fried Goat Cheese is just something we can’t remove from the menu,” says Chef Kiel. “We’ve tried various renditions of it to reach this point, but it’s not going anywhere.” 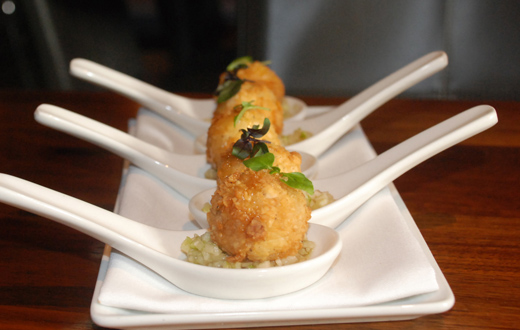 The latest iteration of Watermarc’s Fried Goat Cheese arrives in small meatball form atop a porcelain appetizer spoon. It nests itself on a tiny bed of finely chopped McIntosh and Granny Smith apples with a tiny drizzle of honey mixed in. Each goat cheese ball is crowned in micro basil and mini midnight basil. It’s perfectly melty but not so hot that you risk burning any taste buds away. It’s a grazer’s dream and one for sharing around the table (if you’re practicing unselfishness). 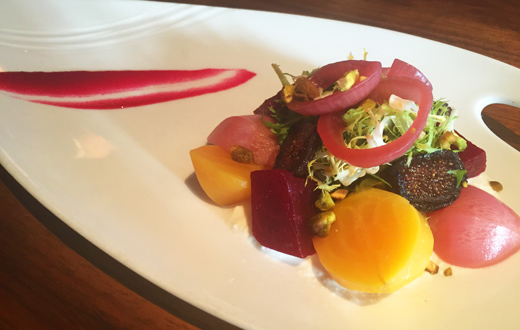 The new Baby Beet Salad greets me next, completely unaware that I’m a rather particular beet salad kind of girl.

Let’s be truthful here. Most beet salads are an apostasy to the dear, flavorful beet. These beets, however, are absolutely delighted to be a part of the Watermarc fare. This is a happy, bustling pile of beet joy with pickled beets, golden beets dusted ever so lightly in saffron, snippets of pickled onion, slivers of slow-roasted fig and small bunches of frisee dashed in vinaigrette. The crowd of our most colorful root vegetable is settled in a creamy feta mousse, which proves most extraordinary for light dipping.

Now, this, my friends, is a beet salad! The beets are slightly crunchy and fresh, and the small discs of sweet fig balance beautifully with the more tart tasters of frisee and pickled onion.

Then, The Chefs Start Getting Serious 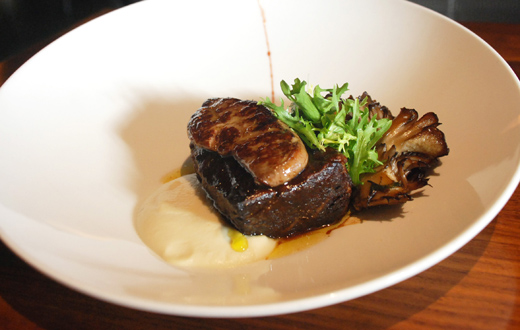 As any foie gras fanatic will tell you, it’s one rich dish in and of itself. Ladle it on top of the lush, full-flavored short rib and you have the protein equivalent of whipped cream piled onto soft serve ice cream. This is such a tender dish that you’re going to have to remind yourself to chew.

Fortunately, the chefs have added celery root purée and a gorgeous roasted Maitake mushroom (nicknamed hen-of-the-woods) to add subtle nuttiness and woody, slightly smoky flavor. The additions balance the plate beautifully, although I’m such a Maitake fan that I tend to treat it as a singular gourmet piece, too.

A Trio of Paella

The Autumn Watermarc menu entrées range from Chilean Sea Bass to lamb, pork chops and filets served three ways. But what seems to catch many a diner’s eye is the offering of Paella.

If you wonder why you don’t see Paella offered in multiple restaurants in Laguna Beach, it’s because it’s not one of your easier dishes to throw together. Recognized for centuries as Spain’s national dish, the ingredients can be … well, fiery and temperamental. Too often, the ingredients revolt and overtake the chef, resulting in a sticky, bland mess.

Paella can be a bit … imperious.

At Watermarc, the Paella is not only firmly under control but arrives at the table as some sort of wondrous flag-waving patriot to its motherland. 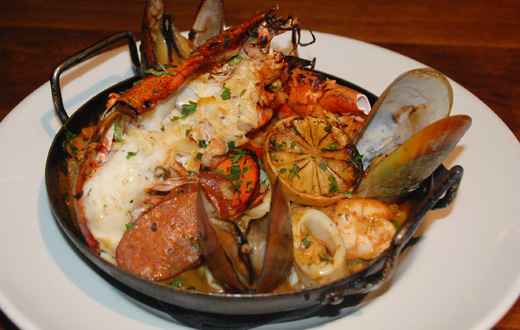 “About a year ago, we started with the Seafood Paella and we immediately started selling a dozen or so orders each night,” says Chef Kiel. “After that, it got a little crazy.”

Crazy is right. Chef Kiel tells me that more than 80 dishes per week sell of the Seafood Paella alone, and I’m not surprised. I don’t know how you could deliver this dish to a table without three tables in proximity deciding to order the same.

Chef Kiel rattles off the ingredients: “It’s a half of a Maine lobster, green lip mussels, calamari, shrimp, linguiça (that’s slices of real Portuguese sausage), sweet peas, a little bit of carrot, saffron and seafood stock and … of, course, rice in that broth.”

This is a wow dish. Commit to digging into this giant bowl like an Egyptian pyramid tomb raider. There are all sorts of treasures hidden here, the best of which is a delicate, perfectly cooked bed of rice (in just the right amount of brothy sauce) at the very bottom. The dish packs a subtle heat in spice and a steamy heat in temperature. I am now a devout fan.

For the Watermarc Autumn Menu, Chef Cohen and Kiel have cooked up three versions – Seafood, Chicken and Vegetable.

“The chicken is very popular,” says Chef Kiel. “We top it with two legs of chicken confit, which everyone seems to really like. We roast a number of vegetables for the Vegetable Paella, too, and it’s ordered as regularly as the other two dishes. 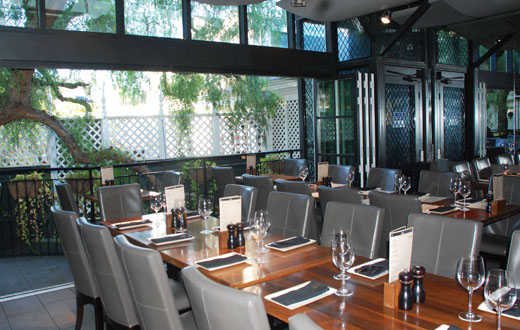 While each of Chef Cohen’s restaurants has a hip vibe, Watermarc brings in a slightly younger crowd of singles and couples. Dining is both downstairs and upstairs, where Chef Cohen replaced walls with retractable glass doors to create a lovely tree house effect.

In keeping with the grazing plate concept, Cohen and his barkeeps chose to offer about a dozen wines by the half glass as “tasters to go along with the dish,” says Cohen.

“It’s all about that commitment again,” he says. “You can go with one big glass of wine, but you can also try two or three in one sitting. It’s all about giving our diners more options … and everyone loves having options.”