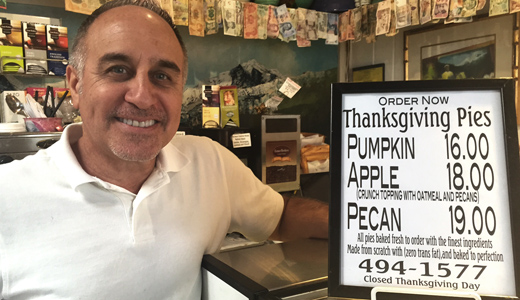 Ron Reno, our beloved 30-plus year baker at Andree’s Patisserie is – once again – elbow deep in pie orders. Each year at this time, his bakery phone lights up with orders for his renowned Thanksgiving pies. They only come in three flavors (because who can really think of another?) – Pumpkin, Apple with crunch topping, and Pecan.

When I was doing my first Thanksgiving here in Laguna, I asked my BFF, Lisa, for pie recommendations. She didn’t hesitate a second in referring Ron at Andree’s. Ron’s pies have been my flourish of a Thanksgiving dinner finish ever since.

Indeed, people drive as far as Palm Desert and the far reaches of L.A. for Ron’s pies.

Small wonder. Each and every pie is baked from scratch – even the pie dough is crafted in single portions for each pie. Ron discovered early in the game that pie dough just can’t be doubled or tripled in the making – it gets terribly offended and refuses to cooperate as flaky, fresh piecrust.

Pies are particular, you know. Happily, the patient baker was willing to adapt to the finicky demands of said pies, and has turned out thousands of homemade pies that are sheer perfection. Last year, records were broken with well over 100 pies crafted and sold (he won’t let me tell you the exact number), and we’re wondering if yet another record can be topped this year.

On Tuesday before Thanksgiving, Ron begins his preparations, and the baking commences long into the night. On Wednesday, the baking continues, but only until that blue door closes in the afternoon. Meanwhile, he’s still baking his daily 200+ baked goods and pastries, and even throws down some holiday coffee cakes that sell out in minutes, too.

The bakery doors close at 2:00 sharp on Wednesday afternoon, and remain closed through Thanksgiving Day. Call in your pie orders today. (949) 494-1577, and be sure to tell Ron that you heard about his fabulous pies from LagunaBeachBest!