“Big Bruce” To Be Released By PMMC This Week 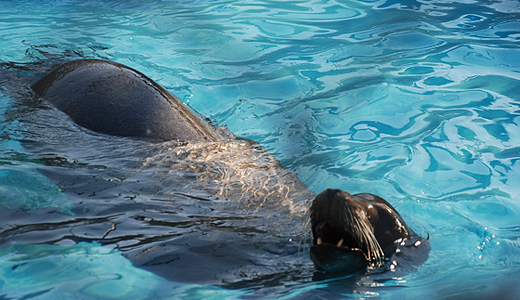 On Friday, I had the most amazing gift come my way – the Pacific Marine Mammal Center invited me down for a last look at “Big Bruce,” the now-famous sea lion who arrived at our seal and sea lion hospital with great white shark bites on his right torso and flipper. He’s so hale and hearty now that Big Bruce is ready to be returned to the big blue. Unlike the people-attended seal release parties that commonly occur, sea lions tend to write their own story when they’re released on the beach, so the PMMC prefers to make a quiet event of it.

How Bruce Earned His Name

When rescuers brought Bruce in on Jan. 22nd, the big boy was nursing an enormous bite gash and had already lost serious weight. The PMMC rescue team commonly names the seal or sea lion upon rescue, and “Big Bruce” got his name immediately, in “honor” of surviving a great white shark attack … if you’ll remember, “Bruce” was the name of the great white shark in Jaws, as was also the name of the great-white-with-a-conscious in Nemo. Melissa Sciacca, the PMMC’s Director of Development, says that Bruce became something of “Bruce Almighty” after his arrival, as it’s rare to see a marine mammal recover from a shark attack, let alone bounce back so heartily.

As a few special guests sipped champagne and toasted the Pacific Marine Mammal Center’s remarkable success, Bruce barked happily in the background and dipped repeatedly in the largest pool on the PMMC grounds (his 350 pounds of bulk takes up most of it.) Meanwhile, PMMC Founder John Cunningham told me that, even during Bruce’s first week of intensive care, his appetite was A-OK. When it was feeding time, our Bruce didn’t miss a beat. Since his arrival in January – about 5 weeks now – Bruce is gulping down an average of 40 POUNDS OF FISH PER DAY, about 1,400 pounds of fish total since his arrival. (At about this point, Bruce emerged from his pool again to proudly show me the big belly he’s regained.) Bruce has put on more than 100 pounds during his stay and, while the gash scar is still very apparent under his right flipper and torso, he is robust, full-colored and bright-eyed.

After admiring Bruce’s sleek self from the PMMC walkway vantage point,  the group moved inside for a quiet tour of the intensive ward unit. In the first room, three newly arrived baby seal pups hunker in brightly sewn blankets and quilts. They are as thin as whiskers, their bony little torsos indicative of malnourishment and exhaustion. They seem quite relieved to be resting in a quiet place, and are yet to discover the wonders of the Cunningham Herring Smoothie.

Across the way, PMMC 18-year marine expert Kirsten shows us how they intravenously feed the famous Smoothie to Carrie, who showed up on Valentine’s Day. Her bunkmate, Otter Pop, is a couple weeks ahead in his recovery, so he snacks on a big bowl of herrings while Carrie is fed. After seeing the painless but painstaking procedure with this one recovering pup, we wonder how this place managed to feed 167 seals at one time last year in March.

“It wasn’t just March – it started in January and didn’t let up till about mid-May,” says Melissa. “And it was all hands on deck! All of us admin people upstairs … well, there was no admin going on … we were all down here, running laundry, making smoothies (a mix of Herring, Pedialyte and Karo syrup), cleaning stalls, helping with the pools … whatever it took to get these seals through an epidemic year.”

Thankfully, donors came to the rescue of Orange County’s only Marine Hospital last year, and every dollar and case of Pedialyte was appreciated. While the Pacific Marine Mammal Center is not experiencing the terrible epidemic of last year, the number of patients is still above average against past years, and the center regularly needs thousands of pounds of fish each week (let alone each month!).

Aside from all that fish, there’s all the other medical, rescue team and hospital supply to be looked after, all of which became crystal-clear apparent to me on my Friday afternoon tour. You can learn more about the PMMC and how to donate here. The PMMC thanks you … I thank you … and Bruce will be sending a great big thank you when he’s back to swimming in his ocean blue.