Big Kahuna Concert This Saturday a Must Go 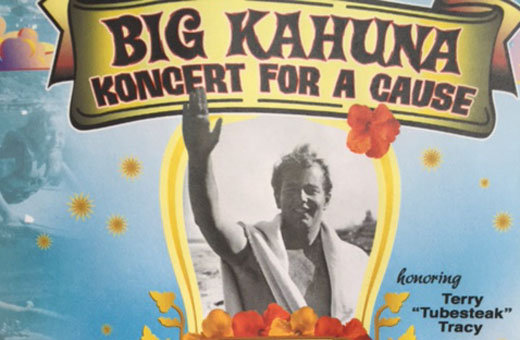 Every now and then, a cause is so great outside of Laguna Beach that I’ve just got to mention it.

This Saturday evening, Jan 17th, the classic OC Tavern in San Clemente is doing a “Big Kahuna Koncert for a Cause,” in honor of Terry “Tubesteak” Tracy. Two of the finest So Cal bands are playing – Nick I & Common Sense and The Untouchables. Additional special guest bands will feature The Mike Dena Band and Joshua Paskowitz of the Flys.

While the Big Kahuna Concert honors “Tubesteak” for his enormous role in the development of surfing’s popularity, the proceeds of the event go to benefit surf-oriented therapeutic non profit organizations including TheraSurf, Rock Autism, Surfers Healing and Vocational Visions.

This is the 2nd annual fundraiser and, after attending the first, I can assure you this is a great party.

Tracy died in Aug. 2012 at the age of 77. From the 1950s, he was a Malibu based dyed-in-the-wool surfer, credited for getting Gidget up on a surfboard and, thus, opening the world to fresh, new movies of surfers and “gidget surfers” on Southern California’s coasts. (His character in the Gidget movies was “The Big Kahuna.”)

Tracy worked tireless publicity in the name of surfing for decades. As a grandfather, his grandson, Jonathon had autism, and Tracy jumped right into working with friends to create the autism charity, Surfers Healing. Thanks to the Big Kahuna, thousands of people around the world are helped now with therapeutic surfing. It’s a fantastic thing to see!