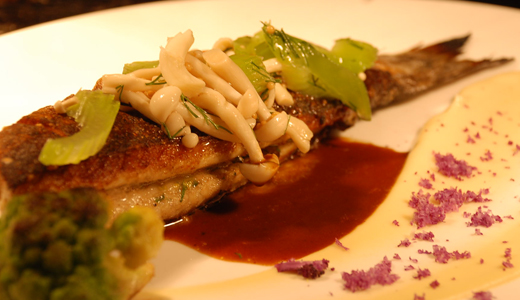 In downtown Laguna Beach, the restaurant, the Broadway Restaurant by Amar Santana, is manned by an extraordinary chef.

To the uninitiated, the restaurant might sound oh-so-haute, but Chef Amar is the farthest thing from “haute” imaginable. He sits across the table from me, hunkered on his elbows, grinning like a 10-year-old boy.

With his story, who wouldn’t grin? Raised as a poor kid in the Dominican Republic, he moved to New York with his family and, shortly thereafter, remembers watching a biopic of famed chef Charlie Palmer. “He was driving down the Las Vegas Strip in a convertible, smoking a cigar,” says Amar. And I thought … man, I want to be THAT guy!”

Fast forward 10 years through a high school cooking program he initially dropped out of (“Who wants to COOK for a living?”) to a full-ride scholarship to CIA in New York, and Amar tells the serendipitous tale of being hired for his internship … by Charlie Palmer, himself. Amar became a master chef for Charlie Palmer and opened restaurants in the man’s behalf for the next six years. He only left Palmer to open his own restaurant in 2012 here in Laguna Beach.

“I don’t have a convertible, but, yes, I have driven down the Las Vegas Strip smoking a cigar in my BMW,” Amar says, with a wide grin.

We’re not sure if the 31-year-old Amar ever stops grinning. And we’re not quite sure when or if the guy ever sleeps. Amar doesn’t do things that other chefs do. Take, for instance, his new Charcuterie Board on the Broadway’s just–released Spring Menu. Charcuterie boards are popular items these days. Most chefs order up a few sausages, add a couple fine cheeses, and call it a day.

Chef Amar, on the other hand, lays down an 8-piece board of sausages, pâtés, and truffle-y mousse, each of which he’s crafted, smoked and cured meticulously by hand …on a whim. He just “kind of came up with each one.” Here’s Duck Salami, Hungarian Smoked Sausage, Pork Rillette and traditional Kielbasa. This brick here is Pork Liver Pâté, while this over here is the same Pâté base infused with chunky dried fruits and spices. The Smoked Truffle Chicken Liver Mousse (my favorite) sits next to his new take on the traditional Porchetta di Questa. The Porchetta, alone, is a multi-stepped process of boning, infusing with garlic and lemon, pureeing, rolling, hanging to dry, further curing and then finally slicing to add its portion to the 8-piece cornucopia.

And Chef Amar is just getting started. 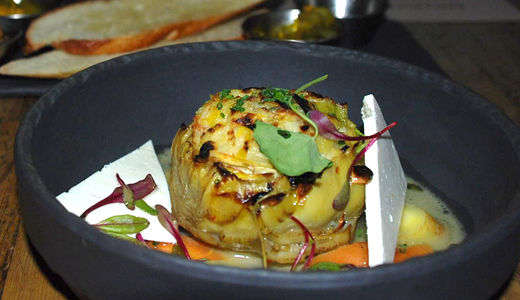 Amar says he looks forward to debuting the Spring Menu as much as he does seeing Daylight Savings Time end. The Broadway Spring Menu is full of fresh, colorful vegetables and lighter sorbets and sauces. He bustles away to fashion his new artichoke dish, leaving me to chat with Ahmed Labatte, Chef Amar’s business partner and General Manager.

Of course, they can never remove the Brussels Sprouts from the menu. Ahmed does a quick calculation and figures the Broadway sells approximately 1,100 orders of Brussels Sprouts each month. As if by osmosis, a waiter appears with the magical bowl, a sublime meld of crisp, roasted Brussels with Chinese sausage slivers and sweet chili sauce “with about 20 added herbs and spices,” admits Chef Amar.

“Only two people have the recipe for the Brussels Sprouts,” Amar says with his usual happy smile. “…The dishwasher and me.”

The best-selling Mediterranean Branzino is staying, too, and the Grilled Prime Skirt Steak will remain as well. As we discuss Ahmed’s pension for the Branzino (flown in fresh from Greece or Spain), Chef Amar appears with his Spring Menu’s Stuffed Braised Artichoke. He sits next to me to pour the sauce, tableside. He is grinning all the while.

I expected an … artichoke. You know, the big bulb with all the leaves you peel and scrape with your teeth. Chef Amar is appalled. “Why would I make you do all that work?”

His prep cooks remove all the leaves. The artichoke is braised with white wine, marjoram, mint, garlic, onions and red pepper flakes. Then, it’s scooped out of the artichoke, and creamed leeks, more marjoram and chopped hazelnuts are incorporated, before carefully stuffing it back into the artichoke shell. Thin triangles of Ricotta Salata are added to the presentation, and the braising jus is poured over the mix at the table.

While the artichoke is a melt-in-your-mouth kind of experience, its marjoram is an unexpected treat. It is sweet and subtle, a sultry Mediterranean spice we rarely pull from our own racks, yet one Chef Amar has ordered in copious amounts “because an artichoke just lends itself to marjoram.” Of course.

For other spring entrées, Chef Amar adds a Tomahawk Pork Chop with dried apricots and cipollini. The Free Range Chicken is spruced with asparagus and lemon risotto. For the vegetarian-minded, he is reintroducing his meatless Wild Mushroom Bolagnaise, created with smoked tofu, fava beans and dried and fresh mushrooms. Diners nearby tell me it’s “unworldly.”

For me, all thoughts of Bolagnaise trip from my head as the Skirt Steak is presented. It is grilled to perfection, bedded in a caramelized onion jus whose consistency is just slightly thicker and shinier, almost a glacé. A swirl of Chimichurri sauce (an Argentinian creation of puréed parsley, oregano, chilies and olive oil) proves a perfect dipping partner to the meat. It is, frankly, one of the best steak dishes I’ve ever eaten.

The ambience here at the Broadway is spectacular. Great music is playing, new spring cocktails are pouring, the captains and expediters are fluidly moving, and Chef Amar moves from table to table, chatting and grinning. I smile as I watch him circle his room and think, ”What a happy relief he decided to cook for a living.”