The Café Zoolu Waddle: Make It Yours (With Pride) 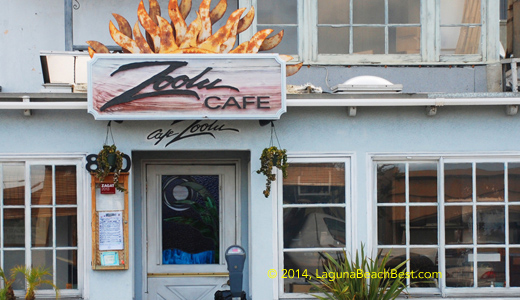 The only thing pathetic about a visit to Café Zoolu has absolutely nothing to do with their impeccable service or food. It’s about how you waddle out of that place after experiencing dinner there.

As you waddle to your car, you tell yourself you’ll walk around the block a couple … or 200 times. You think maybe you’ll embark on 100 or so jumping jacks just to burn a handful of calories away. And, instead, you probably end up in prone position on your couch, watching Downton Abbey re-runs.

This is the thing about Michael Leech, Owner and Chef of Café Zoolu: He believes – at the very core of his being – in creating The Waddle in you. And, given that he’s been creating giant dishes of foodie delight for more than 40 years, you simply can’t fight The Café Zoolu Waddle.

Six days a week for 21 long years, Michael and wife, Toni, have been steering the helm of this little ship on Glenneyre. It’s only a portion of their restaurant career together, though. They met while he was the Executive Chef at Five Crowns in Corona del Mar a long, long time ago.

She’s the edgy, funny, no-nonsense front man (Toni once made Barbra Streisand stand outside on the sidewalk in the rain because her handlers hadn’t made a reservation for Zoolu’s busy Valentine’s night). Michael, meanwhile, is the guy with his head down, turning out phenomenal dinners all the night long with his famous mesquite broiler relentlessly firing. 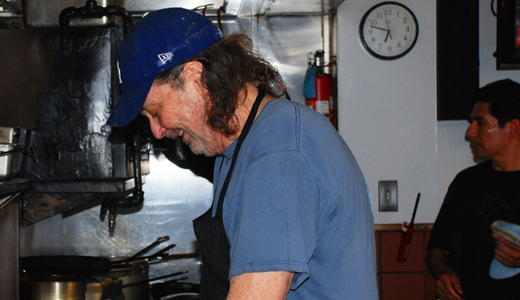 Michael calls his food “Cali-Polynesian” which, when pressed, he claims is a mix of Hawaiian, Asian, Mexican and Cajun influence. Let me say again very clearly: It doesn’t matter which national heritage you choose to make your plate at Zoolu’s … whatever you choose will have you waving its country’s national flag by evening’s end. Café Zoolu is one of the greatest gifts we’ve been given here in Laguna Beach.

This last weekend, my buddy, Don, and I, sidled up to the Zoolu bar, which actually sits right in front of the Chef Michael’s kitchen. I find it the best seat in the house as it’s truly a fascinating and bewildering choreography as multiple dishes are grilled, sautéed and plated by just two chefs – Chef Michael and Francisco, his 21-year sidekick. They rarely ever speak to each other, even as each is adding several ingredients to one plate at the same time – the protein, then the unimaginable mashed potatoes, vegetables, sauces or micro greens.

Meanwhile, Michael’s wife, Toni, and the primary server in the house, Petr  swirl around us with waters, drink orders and baskets of breads and buns. They really don’t need to do much talking between each other, either. Even as the tiny place is packed to the gills this summer night, the entire crew here has spent years together and their teamwork is about as flawless as it can get.

“Starters” Are Greatness Right Out of the Gate 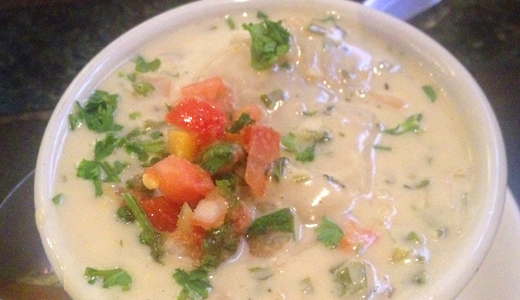 We start with my favorite soup in all of Laguna Beach, Michael’s Seafood Chowder. It’s never on the menu, so you just have to chirp up and ask for it. We choose a cup instead of a bowl of the rich chowder, knowing what lies ahead for the evening. It arrives, steaming and decadent with large chunks of tender swordfish, ahi, clams, shrimp and scallops bathed in a cream-based broth whose recipe is only known by one guy – the Chef himself.

I finish my “cup” and know I could probably walk out right this moment and not be hungry for at least a day. This is the problem, you see. You simply can’t stop because you know it just keeps getting better.

Don and I decide to split the Calamari “Asian Style” as an appetizer, which has long been the addictive choice of many a local resident. While the steak itself is a 6-ounce portion, Café Zoolu goes through more than 25 pounds of Calamari each week.

Unlike the usual calamari servings you see in restaurants, this is an entire squid steak coated in sesame-nori Panko crust and sautéed. (The butterflied steak is so large it barely fits in the pan.) It’s then sliced and served atop a very generous ladle of Thai Peanut Plum Sauce and topped with Sesame Seaweed Salad, Fried Wontons and Daikon Sprouts. 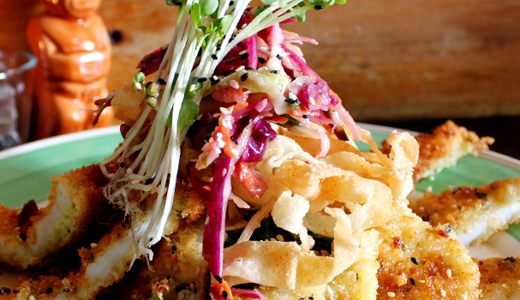 I can’t even finish half of my half order. It’s a sad realization that I’ve already gone down for the count like some kind of Survivor contestant who gets voted off the island in the very first show.

On our last visit to Zoolu, Don loved Michael’s enormous Grilled Pork Chops, but decides to try the famed “Michael’s Meatloaf” instead. I promise to try a nibble.

Meanwhile, the crowd grows thicker and the grill is firing on all cylinders.

Chef Michael dresses a single crab cake appetizer the size of a jumbo blueberry muffin. In assembly-line fashion, Francisco thumps down at least two cups of mashed potatoes on each of five waiting plates. Chef spoons his secret sauce on a plate and gently slices and fans large saucers of perfectly seared Ahi. Then, he and Francisco work on finishing the five waiting plates, a mix of Grilled Halibut and Baseball Swordfish.

Petr and Toni swoop down and wordlessly dash away with heavy plates loaded to their elbows. And the dance continues. 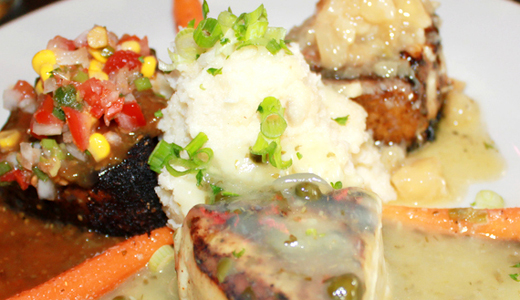 Chef Michael has certainly gained renown and fame for his Baseball Swordfish, each cut of which is actually more the size of a softball. You can order it as a 1-pound piece, or he’ll create three cuts for you, each seared and sauced differently.

He claims it’s the fish itself that creates the notoriety – Michael only orders fresh, wild-caught fish that he personally butchers when it arrives every morning. Along with the Calamari, it’s one of the two biggest sellers at Café Zoolu; Michael orders at least 300 pounds a week to handle the demand.

As we continue to watch, ginormous dishes of Soft Shell Blue Crab, Giant Grilled Shrimp and Fresh Alaskan Halibut work their way to sautéed and grilled perfection and are dressed and whisked away.

My favorite Café Zoolu entrée makes its appearance and I almost change my mind on ordering the dish for myself. It’s Michael’s Cioppino on Bouillabaisse, a fresh seafood stew that is packed with swordfish, ahi, mussels, clams, scallops and shrimp in spicy tomato broth “with a hint of pernod.”

This, in itself, is more than any rendition you’ve seen in your lifetime, but Chef Michael ladles this aromatic stew over a bed of steaming pasta. I’ve mixed doubled batches of brownies in mixing bowls smaller than this serving. It, too, is an enormous dish that can easily be shared.

When I chat with Chef Michael about his famously large dishes, he admits it’s a blessing and a curse.

As food costs continue to rise, the profit margin on such large dishes wanes pitifully, but he’s not at all interested in raising his prices. “This is part of the reason why so many of our regulars continue to be regulars,” says Chef Michael. “They love the big servings – it’s ultimate spoilage.” 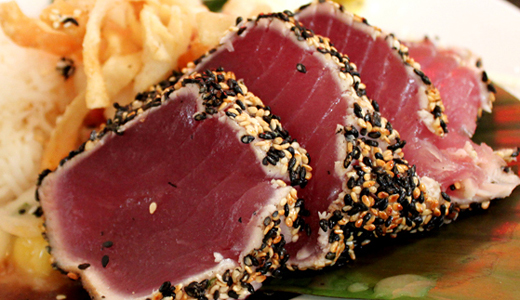 Happy spoilage indeed. While you may pay the same amount for dinner for two at many of Laguna’s finer dining establishments, you’re just not going to see so much beautifully crafted food arrive at your table for this moderate price.

Given that so many regulars and locals dearly adore this hard-working couple, I ask Chef what he can do to continue manning the helm and reaping greater reward.

He simply loves support during the winter months, even if people just toss in for a glass of wine and a bowl of soup. “What keeps us going more than anything is our connection with so many great people in and around Laguna Beach. When they come out in the winter months, it keeps us alive. Seriously.”

We also discuss the pros and cons of offering an addition of “small plates” on the menu. Given that more than 50 items already exist on the menu, it shouldn’t be too difficult to pare down the crowd-favorite servings, but Chef isn’t sure this concept would be accepted by his regulars.

Zoolu’s is definitely a menu of surprising depth and variety, too, especially given that it’s one chef and one sidekick creating almost 50 “starters” and entrées nightly.

Even if you’re not a fan of fish (definitely Café Zoolu’s specialty), you have a vast number of dishes to choose from every single evening – superb Filet Mignon, Rack of Lamb, Grilled Pork Chops, Osso Buco, a 20-ounce Rib Eye steak (the “Cowboy”), and even a handful of pasta dishes.

How anyone actually gets to Chef Michael’s homemade desserts is beyond me, but he has many popular sellers that are repeatedly requested by regulars. I order the daily-made Espresso Crème Brulée so that I can at least snap a photo of the fabled dessert.

We are so full from shared nibbles of Chef’s tasty Meatloaf that we just gaze at the Espresso beauty for a few moments as we talk our bodies into finding one small crack of space to house a bite or two.

As usual, once an initial spoon is had, you simply finish the dish because this is what you do at Café Zoolu. There’s just no sense in fighting The Café  Zoolu Waddle. Relish it.