Celebrate Year of the Ox This Week With Mandarin King 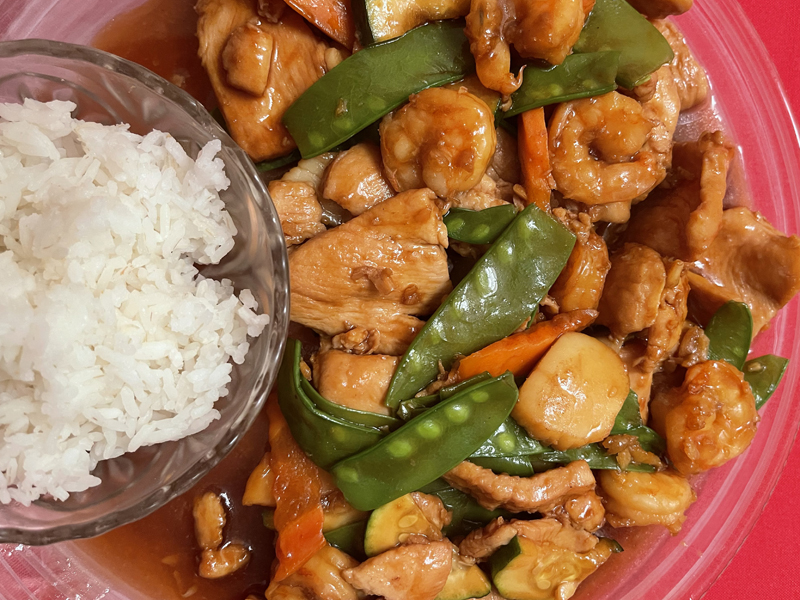 This Thursday, Feb. 12th, Chinese New Year is upon us, ushering in the Year of the Ox.

The Chinese believe the personality of the astrological sign infuses the year. We couldn’t be more fortunate to have the “yin” stability of the Ox in the year ahead. Known for its honesty, positivity and strong work ethic, the Year of the Ox is a complete opposite to the Year of the Rat we’re emerging from.

It’s definitely time to celebrate! Based on the Chinese Lunar Year, this year’s New Year’s Eve begins Feb 11th and is celebrated much like ours with plenty of food and fireworks at midnight. A 7-day holiday follows through Feb 17th. 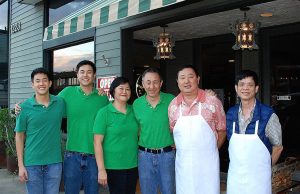 After years of work as an electrical engineer and computer programmer, Glenn and Priscilla Fu landed in North Laguna with a dream to build a community-serving restaurant. In short order, the couple supported the emigrations of Chef Tan (now 26 years with Mandarin) and Chef Gui (now 21 years with Mandarin), and proceeded to build a family here, both within and without.

“We grew up calling all the staff here ‘aunt’ and ‘uncle’ because they’ve all been family to us, too,” says Aaron, their now-grown son who has a Doctorate in physical therapy. Aaron continues to help the family business as the resident General Manager.

Over the years, Mandarin King has come to know and love an enormous extended family of Laguna Beach residents. The restaurant serves up more than 65 dishes and, even in its online ordering system, goes to great lengths to allow for customization of one’s meal. And, although the favorites will always remain, Mandarin King enjoys introducing new specialties to the menu.

“We’re Traditional American Chinese,” said Aaron. “We’re ‘traditional’ to the point of introducing great Asian vegetables like Chinese mustard greens and age-old spices, but we’re ‘American’ in that we custom create every order according to what a person wants. That’s especially important in Laguna,” he said.

Only Open For Takeout/Delivery

When COVID hit last March, Aaron made a difficult decision. Out of humble deference to his aging parents and chefs – his family – he decided that the restaurant would only offer take-out and delivery.

The restaurant has not opened for indoor or outdoor dining since. Other long-standing contracts for school lunches were also put on hiatus.

The family never complains. They understand the “yin” and “yang” to this life of ours and continue to be grateful and gracious for their incoming orders.

So, how do we keep Mandarin King in our “rolodex of restaurant” choices? We start by celebrating The Year of the Ox with them!
After researching the most common Chinese New Year foods, I used Mandarin’s super-simple online ordering system to place two different orders (If you’ve ever eaten Mandarin King food, you know the helpings are beyond large. I have to parse these meals out!)

On both occasions, the food showed up at my door faster than expected and still steaming hot, which is a lovely surprise given that I live in SoLag, the farthest Laguna Beach point from Mandarin King. 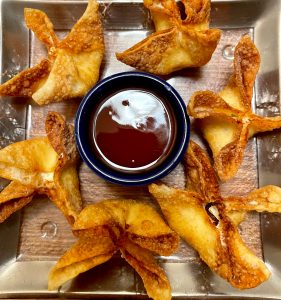 The first item I ordered is not necessarily a New year-specific food, but it’s my favorite appetizer there – the Cream Cheese Wontons. Personally, I like anything that resembles a star, so I think it’s perfectly fine that you make a wish or two as you enjoy these lovelies.

Stuffed to the brim with their cream cheese mix, the wontons are crispy on the outside and creamy perfection on the inside.

Bring on the Wealth This Year!

Duly noted.
Dumplings (or pot stickers) represent wealth as they are pleated at the top (the more pleats the better for wealth).They resemble Chinese silver ingots, which are boat-shaped ovals turned up at the ends. 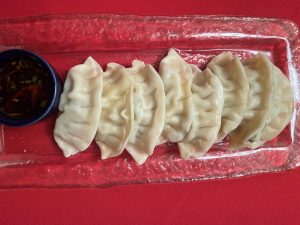 Arrange dumplings in a line to ensure movement forward in your life.

For Chinese New Year, arrange your dumplings in a line instead of a circle, the latter of which indicates that your life will keep going around in circles and we’ve all had enough of that with our COVID 2020 year. Please, my friend, put them in a straight line.
Mandarin provides options for steamed or pan-fried. I opted for steamed initially and the serving was so large, I pan-seared the remainder for a couple lunches thereafter.

Spring rolls also represent wealth. Traditionally eaten during the Chinese Spring Festival (ergo their naming), this is also a must for Chinese New Year because their crispy yellow jackets represent gold bars. As you eat these delectables, raise them in toast fashion first saying, “To a ton of gold in my life!”

Although you can order the Mandarin King spring rolls a la carte, they typically arrive with your entrée choice, too. In my case, I ordered one of my favorites, Mongolian Beef, and my “gold bars” arrived with three kinds of dipping sauce. 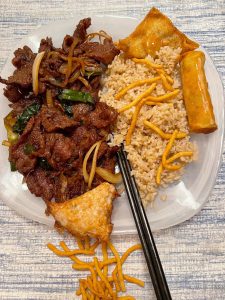 Mandarin King’s Mongolian Beef dish is always tender filet, carved wafer-thin and flash wok-tossed with a soy-and-garlic based sauce. The one serving fed me through three dinners.

Wrap Your Chopsticks Around Longevity & Happiness

My traditional New Year’s Day is typically filled with some form of roast pork, collard greens and black-eyed peas (I have two great cookin’ friends from the South). Chinese New Year, on the other hand, focuses on extra-long noodles.

“Longevity noodles” signify happy life longevity and lasting luck. The way I see it, there’s no time like the present for that. These are normally long noodles (either fried or boiled) eaten specifically on New Year’s Day (Feb. 12th).

Given that I’m eager for all of the gifts these noodles bring, I ordered in advance of New Year’s with every plan to order more on the upcoming day. I chose a simple dish of Mandarin’s Vegetarian Chow Mein, although they also offer add-ins of chicken, beef shrimp, pork, BBQ pork and a house special chow mein that makes a happy family of it (beef, chicken and shrimp).

True to form, these are extra-long noodles coddled in light sauce, micro-thin scallions, green onions, carrots and broccoli florets. And, once again, I received such a large dish that this covers my longevity and half of SoLag’s longevity, too. 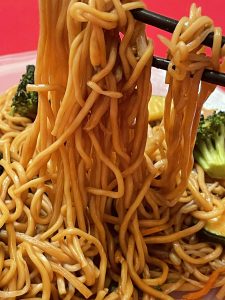 Fish is a main staple in the Chinese New Year, and it comes with a lot of rules. While it represents increases in prosperity, it’s also about enjoying surplus at the end of each year, which signifies making even more money in the year ahead.

Steamed fish is normally the proper preparation for Chinese New Year and carp or catfish are actually the most auspicious of fish to partake of.

Given that my entire freezer is devoted entirely to my recent delivery of Brussels Bistro’s “February Chef’s Box” of 10 dinners (no room for fish head and tail), and given that I’d have to call in neighbors to participate in this table-stance ritual, and given that I don’t believe Mandarin King is serving an entire head-and-tail-fish on its take-out menu, I consider my limited options.

I compromise with my most favorite dish from my childhood forward – Seafood Happy Family. After all, this is awesome fish (scallops, shrimp, steamed white fish and chicken) and it’s called “Happy Family” – who wouldn’t want that in the year ahead?

Once again, Mandarin King delivers impeccably. The dish is loaded with wok-tossed seafood, thin-sliced chicken and vegetables and it makes me feel very happy. Mission accomplished.

By all means – this is my biggest recommendation for your greater fortune in the year ahead – continue to be kind and supportive to our many restaurants here in Laguna Beach as we move together into greater prosperity and happiness in the year ahead.
Mandarin King is open for pick-up and delivery. Call  (949) 494-8992 or go online at MandarinKing.com Hours are Mon – Fri, 11:30 am – 9 pm, Saturday noon – 9:30 pm, and Sunday 3 – 9 pm.

See my blog on:

Last-Minute New Year Tips for Your Best Year Ahead