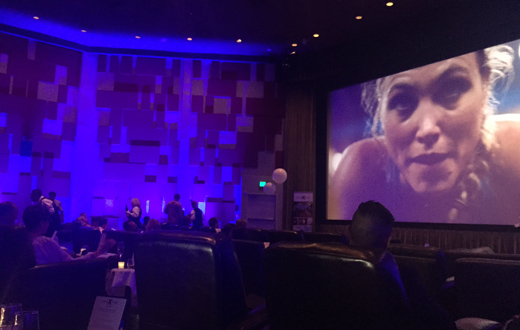 There is no greater fun for me than being invited to review restaurants and resorts – I absolutely love the innovation and passion these people pour into their worlds. I have to say, though, that yesterday’s invite to a “cuisine oriented film viewing” is one of the most memorable events I’ve ever enjoyed.

Through a creative partnership with the Newport Beach Film Festival (NBFF), Celebrity Cruises found a way to introduce its newest concept, A Taste of Film, by marrying its on-board cruise twist of “dinner and a movie” with the land-based world of the renowned NBFF.

In short, several of us were invited yesterday to the screening of The Hundred Foot Journey at the awesome Port Theater in CDM. And, throughout the movie, Chef Pascal Olhats delivered an 8-course meal. Each of the foodie items was delivered on cue and in sync with specific cuisine themes as they were introduced in the movie. 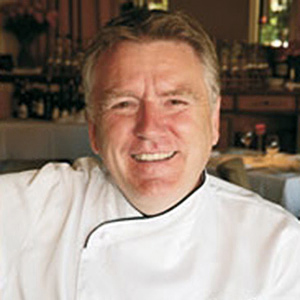 It was fantastic! Here we were, watching a great movie on warring restaurateurs – one offering Michelin-starred French cuisine and the other (directly across the small village road) offering stellar Indian cuisine – and as various items were prepared or discussed in the movie, a new plate of Pascal’s phenomenal cuisine was delivered to each of us.

To top it off, Jackson Family Wines paired each course with one of their stellar wines. So, for instance, as the oldest son in the Indian family, Hassan Kadam, prepared lobster over an open fire, Chef Pascal’s servers delivered Warm Lobster Bisque with Uni and Spices, paired with a perfectly crisp Barrymore Pinot Grigio.

This Taste of Film went on, throughout the entire movie. Homemade Paté and Cheese with a skewer of Heirloom Tomato and Olives … Curried Masala Chicken … Barbecue Sweet Corn with Béchamel Sauce … Baked Breast of Quail … Mushroom Velouté with Coriander … a “special plate of Indian delights” … and a finish with Chocolate Truffles and Fruit Tartelette.

Even though I’ve seen the movie at least three times (hey, I’m a foodie, remember?), Chef Pascal’s exceptional cuisine and timing brought the movie to life in an entirely new and extraordinary dimension.

“Although we’re featuring more than 350 films this year, today’s event was the most technically complex of the entire festival,” said Newport Beach Film Festival CEO Greg Schwenk. “And this is something that Celebrity Cruises does daily!” 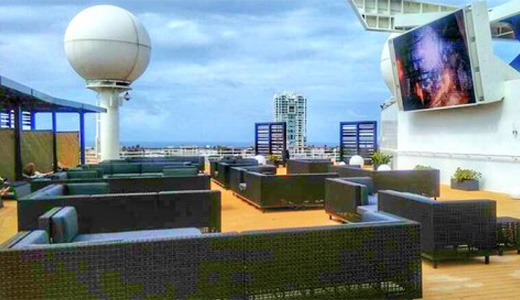 Plenty of Celebrity Cruise personnel were on hand for our afternoon event, and I’m quite sure that many were involved in helping the NBFF put the entire event together. Their Taste of Film concept is something they instigated several months ago on two of their  Celebrity X Cruise ships (the “X” for updated contemporary ships steeped in luxury). They started by retrofitting two large decks with giant movie screens, surround sound systems and lounges that allow the ships’ Chefs to deliver their own multi-course dishes during a movie’s screening.

The concept proved so popular that Celebrity is just finishing the retrofit of a third ship, and the Celebrity Millennium will be joining its fellow pathfinders, Celebrity Infinity and Celebrity Summit, with its own Taste of Film offerings beginning in May.

I had such a great experience at yesterday’s event that I’m actually interested in booking and sailing with Celebrity X just to see how they accomplish this feat at sea!

As groundbreaking as the new event was yesterday, it simply and further solidified the Newport Beach Film Festival’s reputation as one of the finest providers of an annual, exciting event in classic and contemporary filmmaking and films.

The NBFF continues through this Thursday evening, April 28th, with a still-massive number of films, short films, documentaries and more on the docket. Purchase single or multiple ticket access here: NewportBeachFilmFest.com