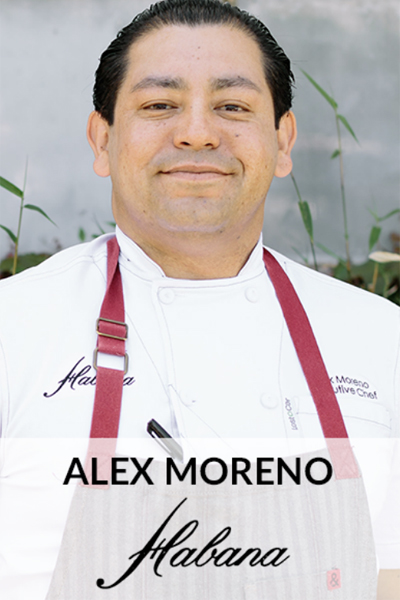 How did you first get into cooking?
Chef Alex Moreno: It’s in my genes. I grew up in the heart of L.A. – just my Mom and me – and she was always cooking for our relatives. Every weekend, she’d make a big pot of pozole and tamales. My first job was setting the table. I eventually graduated as her prep cook, and finally moved over to the stove … many years later. From there I just started working all over L.A. in the restaurants that most interested me. It was an awesome education.

How in the world did you end up as a tour chef with big musicians?
I was working with an England-based catering company and they were looking for American chefs to do the tours with certain bands in the U.S. So, I met with the owner on a food tryout and ended up being the chef for Van Halen.

What did you cook up to get that job?
It was just a simple sauce I make – a blackened spicy salsa. Sammy Hagar would ask me to make it every day. And, my pork chile verde became a main staple for the crew.

Sammy was a big Mexican food fan – he was opening a Mexican restaurant in San Francisco at the time. It’s all he and Michael Anthony ever wanted to eat.  Eddie and Alex Van Halen liked less spicy fare, so I had a lot of creative license to try just about anything.

So … was it a difficulty job cooking for these celebrities?

The musicians and crew are just so grateful to get good food after a show that they were really great to work with. It was a lot of work and long hours … a lot of time on busses and then scrambling to make it happen. And, then, there would be those days when you’d pull into a rural town in Pennsylvania and spend half the day hunting down Sammy’s favorite hot peppers. It wasn’t that he demanded it – I just didn’t want to let him down.

Small wonder you then won first-place honors on Chopped!
Yeah, I guess you could say I had some decent training on the road! That was in 2013 and it was another amazing honor. People on the outside might thing you’re bringing a lot to the table, but it’s such a great learning experience for any chef, I think.

When did you make your move from L.A. to Orange County?
Four years ago. It’s a whole different crowd of clientele here, so it’s been another great learning curve for me. I started in Habana’s Costa Mesa restaurant and, then, was very involved in our expansion to the Irvine Spectrum. The Spectrum Habana is a giant – 10,000 square feet and 350 seats – but we’re finding our groove. We’re staying open till midnight, which is a little different for Orange County weeknights, but there are so many residents around us now that our late night food menu is starting to catch on. And our Sunday brunch is crazy busy – we have a lot of fun with it.

What do you think about your first year’s participation at OC Chef’s Table?
We’re excited about it! We weren’t able to participate last year because we were in the middle of opening Spectrum, and that was a tough call to make. And, of course, I heard all these chefs talking about it after they participated – they say it’s really an emotional experience … you don’t hear that kind of thing very often from chefs. So, I jumped at getting another chance this year. My Sous Chef and I are already planning the menu. We’re definitely doing a cool Cuban twist, but that’s the only scoop you get!

The top chefs in Orange County (along with a few surprise visiting chefs) are getting together again for the renowned OC Chef’s Table at Disneyland® Resort on March 3, 2019.
In it 6th year, OC Chef’s Table continues to help Illumination Foundation raise funds to provide permanent housing and services for homeless adults and children. With OC’s most imaginative chefs creating one-of-a-kind magical menus, it’s no wonder OC Chef’s Table is one of the most coveted gala tickets of the year.
See all 40+ chefs participating and secure your ticket at OCChefsTable.com. And, get to know this year’s phenomenal chefs as Diane Armitage sits down with each, asking 5 questions in just 5 minutes …