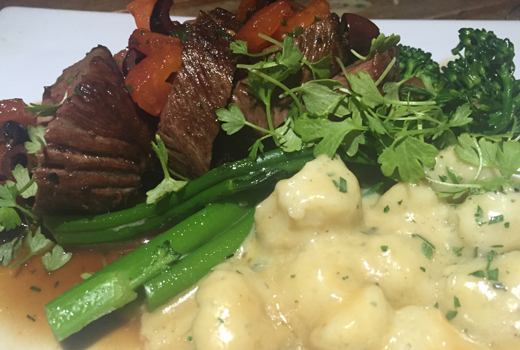 First, it was important to cater to the everlasting love and memories so many thousands of people had with the iconic retail front.

Second, he needed an anchor tenant capable of creating a brand new round of everlasting love and memory. And he found it with Chef Azmin Ghahreman of Sapphire restaurant. 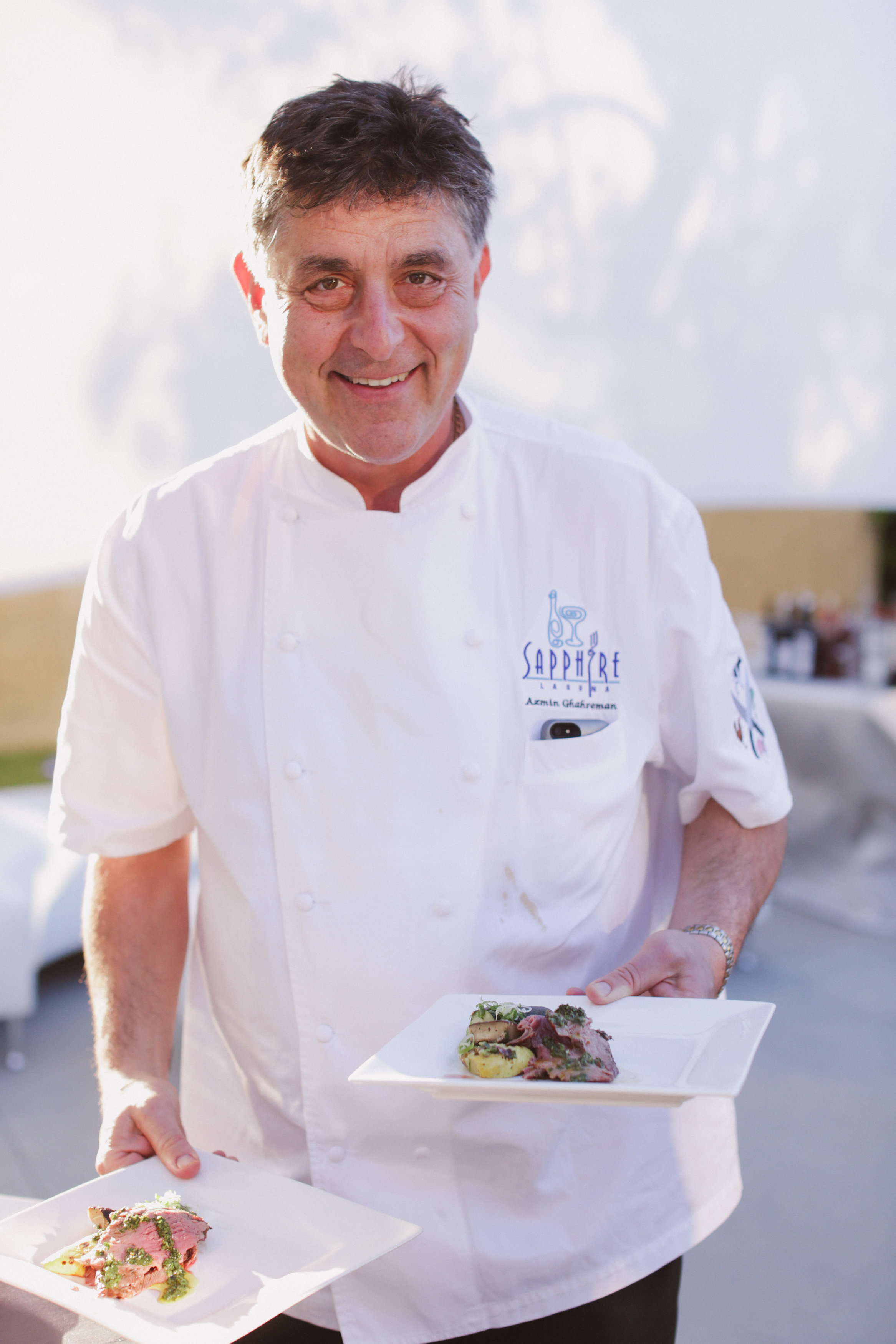 For nine years now, Chef Azmin has changed the face of Laguna’s cuisine with innovative entries that span the world’s finest culinary centers. As he globe trotted various high-level kitchens several years prior, Chef carefully pocketed those tastes to later reproduce them – at, perhaps, an even heightened level – here in Laguna Beach.

Every breakfast, appetizer and dinner is a treat with Chef Azmin at Sapphire restaurant.

So, when he invited me to a special 9-year anniversary dinner, I responded with alacrity … like, in about 21 seconds, if truth be told.

Nine years already, and our Chef is still as creative and fresh as the day he opened his restaurant in 2007. On the appointed evening, as I greeted fellow food columnists and editors, I also shook hands with at least a dozen locals on my way to the table. Unlike other restaurants in this visitor-heavy paradise of ours, the locals feel welcome and respected here. This means something, believe me, as it takes special effort to make the locals, themselves, feel at home in a new restaurant here in our town.

This was a THIRTEEN-course treat, primarily served family style for our event, but easily found on the Sapphire dinner menu. And for the next three hours, my friends and I were treated to the best of all worlds – literally.

“I really take delight in serving the great cuisines of the world,” says Chef Azmin. “It keeps the memories of my tenure in those various centers still alive in me, and it introduces my new world here to the endless creativity of chefs in our world.” 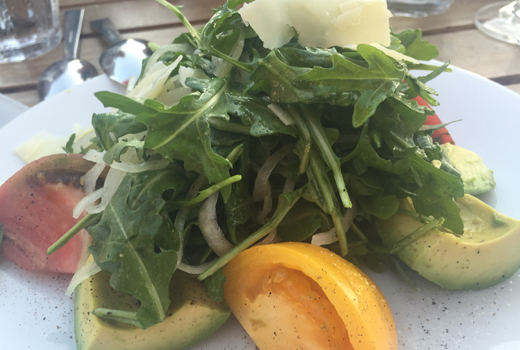 It began with items such as fresh Heirloom Tomato Salad – heirloom tomatoes and chunks of the freshest avocado with deft wisps of Abbaye de Belloc cheese in the dance. 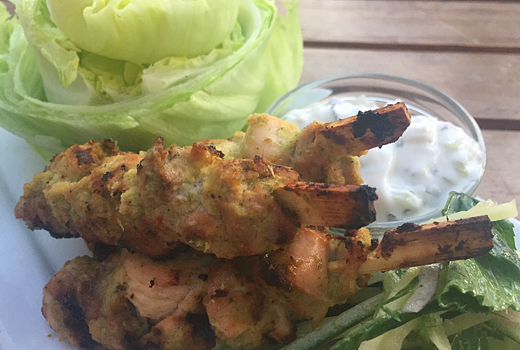 Then, pulling from both Lebanese and Pakistani staples,  Chef introduced Lebanese Lamb Kibbeh, a spicy basted treat laid aboard Fattoush salad and served with shallot yogurt, as well as a Chicken Seekh Kebab Lettuce Wrap that offered fragrant, tender chicken, lettuce shells and Green Papaya Cucumber salad. Later in the evening, we would be treated to another lamb dish, this one an oven roasted lamb sirloin with blue cheese gnocchi and tomato-olive jus. 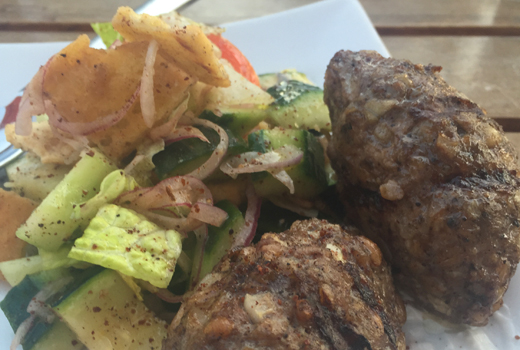 Between the lamb dishes (and the far-reaching geography that founded both), it was a quick trip to Malaysia for Black Pepper Shrimp basted in robust garlic chips, a Spanish/Italian play on Monkfish cooked in a clay pot with country eggplant-tomato stew and baked polenta. Two of my own favorites, the Lingcod Banana Curry served with stone-fruit chutney and Duck Confit with a crazy cherry-chocolate mole, had us leap-frogging the continents again, first in India, and then to Mexico. 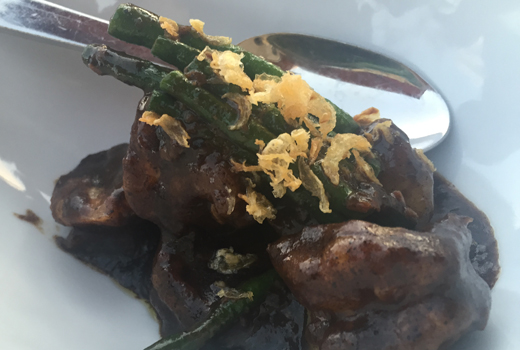 The dishes kept on coming, a smorgasbord of global cuisine. Finally, we landed back in the U.S. of A, first with a nod to the late Gilbert LeCoze who is recognized as both founding chef of New York’s LeBernardin and the chef who introduced Skate Wing in Brown Butter Sauce to an American audience. 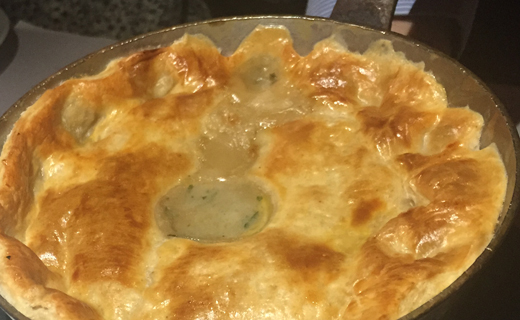 And, then, it was glorious Chicken Pot Pie, rich with perfectly steeped vegetables and a rich broth, all ladled under a piping hot crust. It is only the second chicken pot pie I know of in Laguna Beach (the other resides at Lumberyard), but it is a taste unto its own as it flirts with with curry and tarragon in its cream base.

By time the French, Australians and Germans wandered to the dinner table (a trio of creme bruleé as one dessert, with Australian passionfruit made into a German-originated Pavlova as a second taste treat), we hardly had the strength to lift our forks.

What an honor it is for us to to be included in the world of Chef Azmin Ghahreman! While Chef’s menu regularly changes on a Sapphire restaurant day, you’re bound to find many worlds of great cuisine, each dish of which enjoys even greater realization under Chef Azmin’s endlessly creative hand.