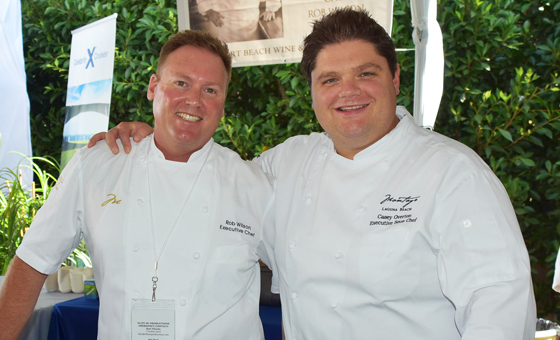 Yesterday at the great Newport Beach Wine & Food Festival, I found one of my favorite chefs in residence, Chef Casey Overton. I told him I was relieved to hear that he’d been moved up the ladder to Executive Sous Chef in June.

(Formerly the Executive Chef of The Loft, you may remember me reporting that Casey had been promoted, and new Chef de Cuisine Michael Campbell had moved into Casey’s former kitchen space. Since that time, Chef Casey has worked directly with Executive Chef Rob Wilson as they’ve overseen all culinary operations throughout the entire Montage establishment.)

Casey thanked me for my comment … and then informed me that his last day at the Montage Laguna Beach is this Friday, October 7th.

This announcement calls for severe gnashing of teeth.

Chef Casey will be moving to a private chef’s position, which surely offers a bit more flexibility in his own family time. Assuredly, though, the masses (even beyond me) will miss this talented Chef.

For years, Chef Casey has been one of my favorites in town as he made a significant impact on the menu at The Loft and was one of the nicest, most affable guys around.

He used to teach these great holiday cooking classes at The Loft, and I still count his holiday class in “meat preparations” as my most favorite cooking class ever. He let me take his cell phone number in case I came up with any emergencies during my first attempt at grilling an entire rack of lamb for Christmas dinner – that’s a rare gift for any Chef to offer. Fortunately, his cooking lesson proved a winner for one of the most memorable meals I’ve yet served.

Montage Executive Chef Rob Wilson says that the search for a new chef is well underway and, as Montage standards go, I’m sure we’ll be shortly reporting on a great new addition to the culinary team there.