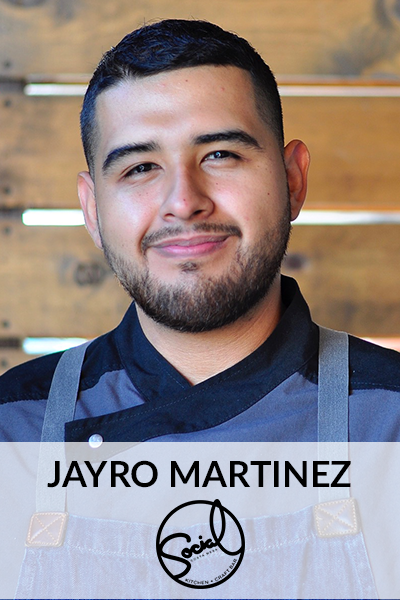 When was the first time you thought you might like to cook?
Chef Jayro Martinez: In high school. I remember passing the Home Economics room and smelling all these great smells. I figured any class that smelled like that was one I needed to be in. The teacher was great, and as I learned baking fundamentals, I realized I was excited about something besides sports. All the different textures and the science behind this baking empire … who knew? It was just awesome!

When I was a senior, I found out that there were culinary school scholarships for under-served kids. I was lucky to be selected. So, I started directly out of high school and, in my free time, worked in restaurant kitchens.

Where did you first start?
I started with a company called Grace Catering and also worked in the Loews Santa Monica Beach Hotel. I started there as a prep cook and worked my way through all the stations to become the lead line cook.

It wasn’t my only restaurant, though. In fact, it wasn’t the only catering company I worked for, either. I would volunteer my time to work at restaurants. I wanted to study how every single one operated. Through it all, I gained a very broad knowledge of cooking styles, from Mediterranean to Spanish to Japanese. And then I ended up opening my friend’s Israeli restaurant, Mh Zh.

Not a bad reputation to earn as the first restaurant kitchen under your command. Didn’t Mh Zh make Best Restaurant of the Year with Thrillist?
It surprised all of us! It helps that it was a tiny restaurant – we only had 500 square feet. Within two weeks of opening, we were doing 200 covers a night with people waiting nearly 3 hours to be seated. It was absolutely crazy.

I worked there the first few months and then continued to consult while I went over to help another friend open their catering company, Sqirl. I love the mix of all of it.

What made you decide to make the leap from L.A. to the O.C.?
My girlfriend was going to school at UCI, so I thought I’d give O.C. a try. Social had caught my attention as they had such great reviews, so I went to work with Chef José in June 2017. We were able to launch a new menu before he moved to help at another of our restaurants. Then, I made the leap even farther south to South Laguna Beach to help Nick Bennett open “AHBA.” We opened in the fall of 2019, and it’s been fabulous. The people of Laguna Beach are so supportive of us.

So, now that you’re at Social in the O.C., what do you see as the biggest difference between the clientele?

Everything in the O.C. is so clean and fresh and calm! It doesn’t feel hectic like L.A. The restaurants here are more traditional and classically driven – you don’t necessarily see the melting pot of cuisines like you do in L.A., but the food is so classically great. I was exposed to a lot more farmer’s markets, and I think there’s more vegetarian cuisine, as a rule, in L.A.

So, I’ve enjoyed discovering the markets out here and bringing in more of that “urban” exposure to our AHBA menu. I really love coming to work every day.