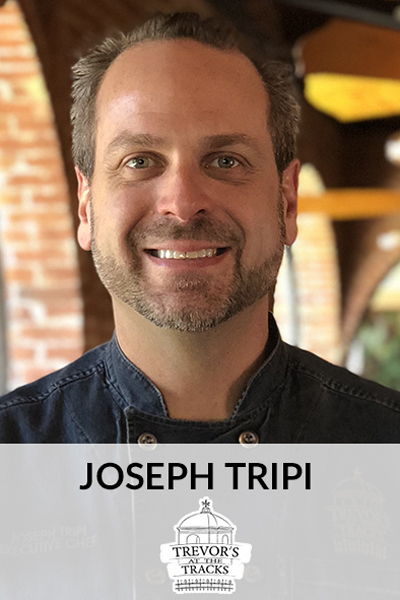 When did you first get interested in cooking?
My father’s side is 100% Sicilian, and my mother’s side is Russian-Polish, so I got to see a LOT of different kinds of cooking from my two grandmothers. But it wasn’t until I was 10th birthday –when I went to Benihana’s and saw those guys tossing food and knives around – that I really got interested in cooking. I thought that was the coolest thing ever.

I was still a kid when I started taking cooking classes with adults, and I got into a culinary program at my high school. I was attending the California Culinary Academy when I saw an ad from Wolfgang Puck. I decided it would be one of those chances of a lifetime so, at 21, I started working as his executive chef.

What was the first dish you ever cooked?
My Mom had a fryer, so I got into making my own donuts and buffalo wings at a pretty early age … like way earlier than most kids should probably be standing on a stool leaning over a deep fat fry machine. But I still remember learning how to cook spicy Arrabbiata marina sauce with my Sicilian grandmother. I still use that recipe today.

What’s the best memory you have from all that at-home kitchen cooking?
The day the white saucepot got passed down to me. This particular pot had been in the family for generations and was always passed from mom to daughter to daughter. This time around, though, it didn’t go to my sister – it went to me. I was 18 and it was a moment!

Last year was your second year at OC Chef’s Table. What was your takeaway from the evening?
I was surprised how fast it went. We were there early and I was a little stressed about getting all my stuff set up. Then, everybody started cooking, and we all started chatting with other chefs and our table of patrons and listening to these amazing stories from the stage, and the next thing I knew … it was over. It was having such a great time, I didn’t want it to go so fast!

I’ve done some really cool events with Wolfgang, but OC Chef’s Table has been the most memorable event for me, personally. There was such a grandeur about it … not at all in a lavish spending kind of way, but in the way, Illumination Foundation shows such honor and respect to these people who have somehow ended up upside down in life. And the people who attend the event are so respectful and supportive of all the work that’s being done by Illumination Foundation. It’s humbling, really, and it felt like such an honor to be a part of it all.