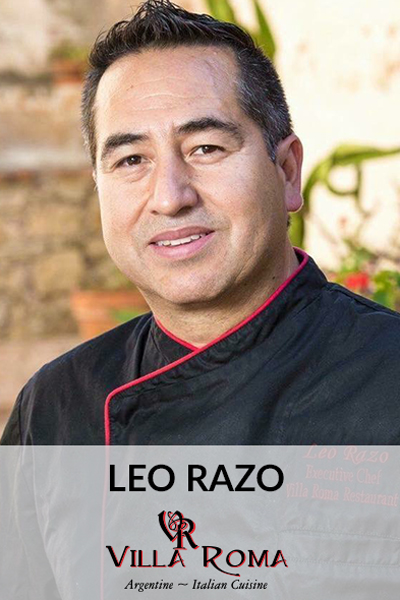 You could say you learned how to cook the “trial by fire” way, yes?
Chef Leo Razo: Before I came to the U.S., I was in the Mexican Army and I got thrown into the kitchen, cooking for 3,000 people every day. I definitely learned how to handle a rush on the kitchen, yes!

When I came to the U.S., though, I started as a dishwasher. I still wanted to be a cook, so I started taking cooking classes, and moved my way up into the kitchen line eventually. I then traveled through Italy and other countries, always working in the kitchens so that I could learn. I fell in love with Italian cuisine, and that was the driving force behind opening Villa Roma in Laguna Hills.

What is the primary difference in cuisine between Villa Roma and your new restaurant, Cambalache?

When I was traveling, I always liked the outdoor grilling and foods from Argentinians. At Villa Roma, I’ve always featured a few Argentinian dishes, but Cambalache is more Argentinian with a little bit of Italian. In the 1920s, many Italians moved into Argentina, so the two cuisines are very compatible, like brothers who get along.

You’ve been helping homeless individuals even before getting involved with OC Chef’s Table …
A few years ago, I hired a gentleman – Justino Hernandez – and at the time we didn’t know he was homeless. He didn’t have a car, so I would drive him “home” – he would tell me to drop him at the sidewalk in front of his apartment complex, and it wasn’t until much later that we realized he was sleeping in the bushes behind the complex.

When he started missing work, I figured out what was going on and decided we had to help him. He was an alcoholic and so skinny … but he had such a beautiful smile. I told my wife that he had something special. So, we sponsored his rehabilitation and I started to show him how to cook.

He had such a talent and he was so eager to learn that he’s now my Sous Chef. Now he’s married and he will be a new daddy before the end of the year. His whole life has changed. He’s been with me four years now, and we have another gentleman – Daniel Gomez – we’ve helped, too, who’s been with us three years. They’ll both be with me this March at the OC Chef’s Table.

This will be your fourth year with OC Chef’s Table. Why do you keep returning?
We’ve always liked doing things in the community, so when we discovered Illumination Foundation a few years ago and saw the work they were doing, it was a natural fit. And, I’ve always believed that when chefs get together, they can create a world of good, so OC Chef’s Table was an easy decision. I know most of the chefs who attend, and it’s like a giant reunion for us. Last year, I even ran into Jorge Sotelo a pastry  chef with Disneyland® who was from my own hometown in Mexico. We both looked at each other and said, “What are you doing here?!”

Ultimately, though, I love all the magic of the night … all the miracle stories that seem like miracles but are really just the people at Illumination Foundation keeping their commitment to help our fellow human beings. It’s a great reminder to me to keep doing my part. We’re the ones who can make a difference … it’s not someone else’s job out there, it’s our job. And when you see these changed lives, it’s all worth it.

The top chefs in Orange County (along with a few surprise visiting chefs) are getting together again for the renowned OC Chef’s Table at Disneyland® Resort on March 1, 2020.
In it 6th year, OC Chef’s Table continues to help Illumination Foundation raise funds to provide permanent housing and services for homeless adults and children. With OC’s most imaginative chefs creating one-of-a-kind magical menus, it’s no wonder OC Chef’s Table is one of the most coveted gala tickets of the year.
See all 40+ chefs participating and secure your ticket at OCChefsTable.com. And, get to know this year’s phenomenal chefs as Diane Armitage sits down with each, asking 5 questions in just 5 minutes …