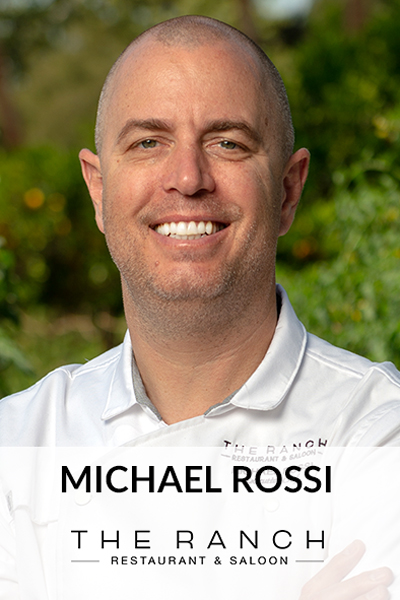 When did you discover the glory of cooking?
Chef Michael Rossi: When I was a kid, my brother and I would fix taquitos or wontons before baseball practice. At the age of 8, I was Master of the Toaster Oven. It was a heady experience.

But the real cookin’ happened at my Grandma’s house.  My Dad was the oldest of 6 kids, and my siblings and I were the first grandkids of many to come. My grandfather was in charge of the bread and pizza baking, and Grandma was in charge of everything else. We weren’t even allowed in the kitchen until it was time to clean the dishes. Eventually, though, I got to stand on the chair and stir sauce – that was another big moment, for sure.

When did you decide cooking needed to be your profession?
When I discovered people actually cooked for a living! I was majoring in business law at U of A, and one of my buddy’s roommates got accepted to CIA in New York. At first, I thought they were talking “THE” CIA, and when I found out it was a culinary school to train chefs, I was aghast.

I remember thinking, “There are schools to DO this for a living?” We had no Internet or Food Network back then; I had no frame of reference. I rummaged up a few formal cooking shows on TV and … on a whim … flew up to check out the California Culinary Academy in San Francisco. I flew there in the morning, flew back the same evening, and drove straight to my parents’ house to tell my Dad I was slightly changing my major from business law to cooking.

My Dad was even more aghast. “What?” he said. “You’re going to go to school to be a fry cook at Denny’s?” But I took him up to see the CCA campus, and he was as amazed as I was. It was so cool to see so many people passionate about cooking.

What was your first restaurant job out of CCA?
I started working for a great chef in San Francisco while I was still in school. I totally immersed myself; I couldn’t get enough. I stayed at the school on the weekends to cook with chefs and took cooking classes the chef professors offered to the public. I honed in on Roy’s in Maui as my first real excursion in 1997. Roy’s was THE place to be; it was a great education.

So, tell me about what happened between Roy’s and The Ranch in Anaheim?
I was all over the map. I attended culinary school in Italy for a year, returned to Brentwood to work at Border Grill, then flew back to Italy to work at the 2-star Michelin restaurant, Locanda Posada Solarola. Chefs came from all over the world to work with this chef, so I was living with two Japanese guys and working in an Italian kitchen where absolutely no one spoke English. I was – seriously – a fish out of water in just about every way, but it was such a phenomenal experience.

I came back here to open Roy’s in L.A., then was involved in the opening of Napa Rose at the Disneyland© Resort and Ambrosia in Santa Ana.  When The Ranch Restaurant & Saloon opportunity came along, I jumped at the chance.

So, what of your personality exists in The Ranch?
Well, all the places I’ve worked … they all have a place here on The Ranch’s menu. We’re blessed to cook whatever we want, and I like to change it up all the time. On a normal evening, we’ll have 10 or 12 menu items that we’ve changed from the day before. You can only pull that kind of thing off with a talented team that loves to cook, and I’ve got the best around.

I love finding really unique suppliers with a superior product. I just got back from Tasmania where I spent a week hanging out with a bunch of great chefs and going to the Wagyu beef farms and whiskey distilleries. It’s my inspiration for this year’s New Year’s Eve menu.

This is your third year at OC Chef’s Table. What did you think of your first year at OC Chef’s Table?
I loved it! Chef Andy Sutton over at Napa Rose is a great friend of mine – he’s the one who got me involved. Just being back on the Disneyland® campus and being around all those great chefs … it just felt like going home.

But the real sense of “family’ began when the Illumination Foundation folks opened the doors, and all these amazing people came in to support their cause. The crowd and the stories and the leaders on the stage who are so committed to ending the homelessness issue … it brought it all home to me. It was just overwhelming being a part of such a good thing. It’s why we keep returning.

___________________
The top chefs in Orange County (along with a few surprise visiting chefs) are getting together again for the renowned OC Chef’s Table at Disneyland® Resort on March 1, 2020 to provide permanent housing and services for homeless adults and children. With OC’s most imaginative chefs creating one-of-a-kind magical menus, it’s no wonder OC Chef’s Table is one of the most coveted gala tickets of the year.
See all 40+ chefs participating and secure your ticket at OCChefsTable.com. And, get to know this year’s phenomenal chefs as Diane Armitage sits down with each, asking 5 questions in just 5 minutes …