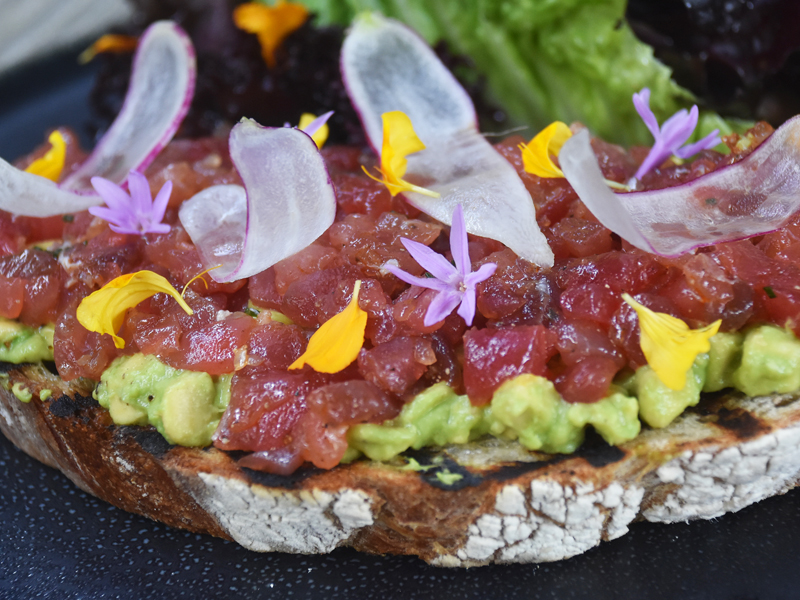 When Chef Craig Strong left his immaculate Montage-based restaurant, Studio, to start his own restaurant in Laguna Beach, the news was something akin to Moses coming down from the Mount.

As much as we’ve all loved Craig Strong in our community, few of us regularly visited Studio or felt comfortable just “dropping in” to the bar, despite the pains he took to lure locals. When he announced plans to take over the old Taverna space at 222 Ocean Avenue, we rejoiced in the streets … and then (admittedly) worried amongst ourselves about what his rumored menu and pricing would be.

Today, Chef Craig invited media in for a dining preview. He’s opening THIS Friday, Oct. 5th, to the masses, and plans for lunch and dinner seven days a week. (Ah, the joys of inheriting a Chef who grew up in the hotel and resort business.)

After one of the most generous and well-prepared previews I can remember, I can assure you of the following: 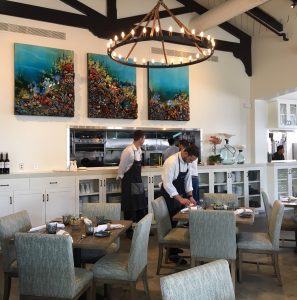 The interior and patio are warmer now, thanks to Tuvalu’s Laurie Alter (also responsible for The Ranch Laguna Beach decor).

Resident Mixologist Ryan Perez is a cheerful greeter. His energy, along with his self-created infusions and fresh juice add-ins remind me of Adam, our former Sapphire star (small sob, but we’re carrying on).

The front of house runs like clockwork, which is near miraculous given this is the first test trial in service. The new General Manager, Dylan, has worked with Michael Mina’s Group as well as with Chef at Studio, so clockwork is the only name of the game. (That being said, when all hell breaks loose on Friday with the community descending, please remember to grant this newbie restaurant a break or two before running to Yelp. I’m not sure that this restaurant will get to experience a soft roll-out given the happy expectation in the area, so please offer “wrinkle forgiveness” while they get their feet under them.)

Servers are friendly and very well-versed in the menu, too. I took my good friend, Ali North from Surf & Sand Resort with me, and our server, Isaiah Paje, treated us like gold. We followed his suggestions to the letter, expecting bite samples to arrive and, instead, were faced with gorgeous, full-size renditions of the menu items. 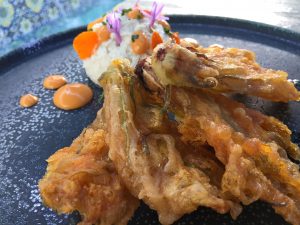 The Squash Blossom Tempura was our first choice, and it arrived with a Cod Brandade. Brandade is the French name for this whipped salt cod spread (originally Mediterranean roots, I believe). It is served up cold (preferred) and we used the blossoms as scoops or chips for the fluffy spread. If this was the decadent beginning, we knew we were in trouble … 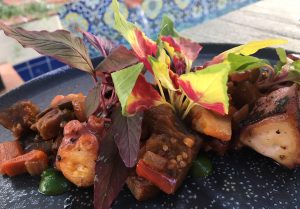 The Charred Spanish Octopus is a work of art, nestled in with Cauliflower Ratatouille and adorned with none other than Carnival Amaranth (if you don’t know what that is, ask Ruben Flores on his Saturday Garden Walk.)

We pass on the large selection of salads and wood-fired pizzas to try the lighter dishes (heh) – a Dungeness Crab Cavatelli, a “PLT” Sandwich (Grilled Pork Belly) and, finally, Beef Tournedos. 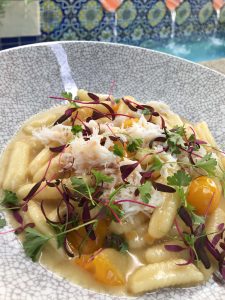 Isaiah explains that Chef Daniel is in charge of creating all the pastas from scratch, and when the Cavatelli arrives, we’re expecting a heavy, rich dish. Instead, the Cavatelli (its pasta shape often referred to as mini hot dog buns) is light and airy, pairing beautifully with a delicate lemon and Sungold tomato sauce. 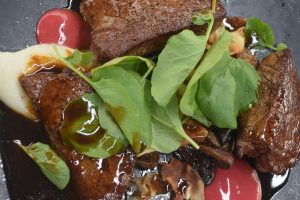 The Beef Tournedos (pronounced turn-a-doughs) is a large dish with three generous seared filets that are so tender they can only be aged beef. A slightly crunchy, nutty depth adds balance to the rich meat by way of Roasted Sunchokes (also known as Jerusalem artichokes) and Maitake mushrooms (my favorite French chef in Las Vegas calls them by their nickname, “hen of the woods”). Dollops of classic Bordelaise and raspberry finish the dish to perfection. 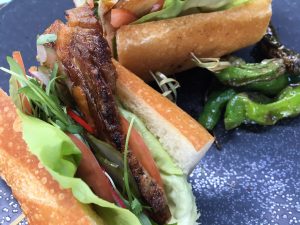 Our undoing, though, is the PLT. Unlike its flowered, gorgeous counterparts, the PLT waddles to our table with no apology. It is a sizable sandwich, stuffed to the brim with beautifully seared pork belly slices and sliver-thin slices of what looks to be beefsteak tomato, serrano chiles, radishes and what can only be house-made pickles. A polite leaf of butter lettuce keeps this rowdy crowd safely nested. Expecting a crusty sort of bread to battle a bite into, the PLT’s bread is so soft and fluffy that it almost brings tears to your eyes. We were SO full … but we just couldn’t stop eating this sandwich.

We repeatedly turned down dessert. For the record, though, the Whipped Coconut Custard is vegan. Rather than going the traditional custard route with an abundance of eggs, butter and cream, this version is made with coconut milk and Iota Carrageenan, actually a seaweed that is commonly used as an emulsifier, stabilizer and thickener in various dishes. And, Chef Craig’s Spice Cake is the same he once offered guests as gifts when they departed Studio).

True to Chef’s form, we were presented with our own parting gift, too – three freshly baked, soft cookies, bagged and ribboned for the occasion.

From the first greeting to that final bag of cookies, Ocean at Main is a class act. This time around, though, I suspect we’re all going to get to know the more down-to-earth side of Chef Craig who’s made it very clear that Laguna is his home.