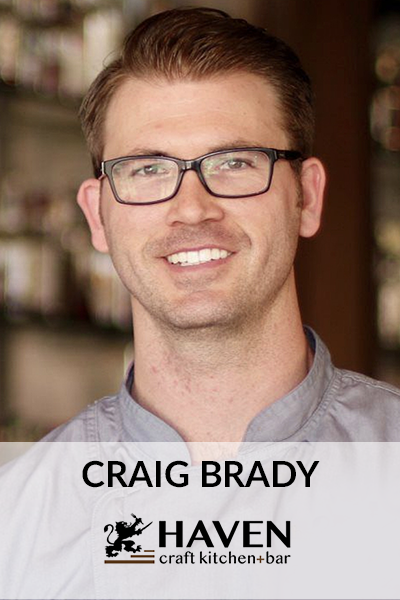 Q: What made you decide to become a chef?
Chef Craig: As a kid, I was always helping my Mom in the kitchen. She was a great baker, and every other recipe came out of Betty Crocker. So, I started improvising early on. By the time I was 15, I was making dinners for the family and knew that I didn’t want to have an office job. I was watching Bobby Flay on Food Network, and it finally dawned on me that I could essentially travel the world and always have someplace to work if I became a chef.

Q: You grew up in Yorba Linda. You chose the French Culinary Institute in New York. There are about 97 culinary schools between here and there. Why FCI?
Chef Craig: I wanted to go to the best place I could and … well, the French are the best! And, I thought New York City was the hottest city on the planet. Plus, it’s where my idol, Bobby Flay. went. If he could go there, I could go there! I loved it, even though they pushed us hard. The chefs were very intimidating – they taught in more of the military brigade style for the kitchen. It’s a pretty old school technique now, but it certainly prepared me for the real world and the different personalities in chefs I’d meet and work for. But, between that hard push and the “friendly” competitiveness between my classmates, it fueled a lot of quick growth.

Q: You popped back to California but then headed back to the East Coast …
Chef Craig: I started right out of culinary school at the Montage Laguna Beach in that first year after they opened. I worked in three great restaurants thereafter, but I had this ache to get back to New York, so when the enoteca, Posto, in Boston had an opening, I took it. Boston is massively different than New York, but it was really cool, especially in the chef ranks. When the chefs know you’re a chef, they roll out the red carpet for you in their own restaurants. There’s a huge element of chef-to-chef hospitality and support of talent on the East Coast that you don’t see as much out here … so, I do my best to carry that kind of hospitality and tradition forward here in my own restaurant.

Q: How did you first hear about OC Chef’s Table?
Chef Craig: I came back to the OC and joined the Haven team in 2012. I was there for four years and then spent two years in Michael Rossi’s kitchen over at The Ranch. That’s when we both started hearing about OC Chef’s Table – it was just getting rolling, but it was making a big impact in the chef community – chefs were talking about it as an “elite” kind of event.

So, a year ago – 2019 – Chef Michael and his team signed up to be a part of it, and I followed his lead. Anything that The Ranch chooses to do outside of its own kitchen is top-tier – they’re very good at choosing events that allow them to showcase their talent in a unique way and attract great clientele you hope to see in your own restaurant. And, what Illumination Foundation is doing every day right here in our community is key. Everyone in the room knows that we’re coming together to help people here in our own world – that makes a difference, too.

We had so much fun with our table of guests at OC Chef’s Table. And, the people at Illumination Foundation are so organized – it is efficiency and communication at a whole new level. Most importantly, though, I loved that their Founder Paul Leon told us this year at our Chef’s Breakfast exactly what they did with the funds we all raised last year. I like when you can see what’s happening and it’s BIG – they bought and renovated a big house and moved homeless families in … all in just a matter of months. That’s incredible!

Q: You’re known for your unique beer pairings at Haven. Will your guests this year be seeing any of that in play?
Chef Craig: Absolutely! I treat beer pairings like wine pairings – it’s an intimate science. So, we’re not doing something like a pilsner – a beer pairing at OC Chef’s Table will be much more atypical and unique. We’ll probably do the beer pairing with one of the five dishes.

Q: Do you have most of the menu worked out? Can you give me an idea of one of the dishes?
Chef Craig: We’re just about done with the menu – four of the five courses are finalized. I like the starter we’re doing – Early-season morels with English peas and pork cheek Guanciale with lightly cured egg yolk confit, pearl onions and pine vinegar. Or, more easily put – a yummy early spring veggie mushroomy dish!