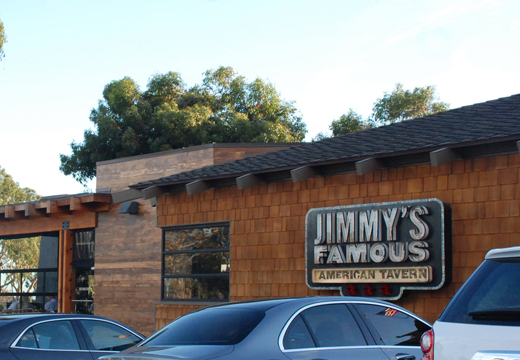 This week, I’ve stepped out of the actual city limits of Laguna Beach (oh no!), but thought I’d check in on the restaurateur who was one of Laguna’s first culinary pioneers – David Wilhelm.

The founder behind Kachina in downtown Laguna Beach in the early 1980s, Sorrento Grill in 1989, and French 75 in the 1990s, Wilhelm was largely responsible for putting Laguna Beach on the culinary map.

The creator behind as many as 30 trend-setting restaurants and high-level chain concepts in Huntington Beach, Newport Beach, Corona del Mar and Laguna Beach, Wilhelm is often referred to as an iconic presence in the restaurant industry and a “restaurant superstar” in regional and international press.

… And, yes, even superstars can struggle with their own form of kryptonite. For Wilhelm that stranglehold was the countrywide recession in 2008 and 2009. “We were fine with our nine restaurants in the area, but an extension of our partnership took a beating in our restaurants in Arizona and, ultimately, it made its impact with us here,” explains Wilhelm.

With the closing of the Culinary Adventures empire, Wilhelm took a “sabbatical” from Laguna Beach, and his presence has been significantly missed. But, since his first restaurant in CdM in 1978, Wilhelm has clearly and repeatedly innovated a new language in the restaurant experience, and his innovations just aren’t capable of taking sabbaticals. So … he’s back, this time working on the southernmost tip of Orange County.

A New Concept for a New Time

Now just seven miles from his last Laguna Beach restaurant’s front door, Wilhelm is quite probably helming the most popular restaurant in Dana Point – Jimmy’s Famous American Tavern. Since its opening day in August 2013, and from its Sunday brunch at 10:00 a.m. to its lunch offerings, immensely popular happy hour and dinner offerings through the late night hours, Jimmy’s is a rocking scene of activity.

This time around, Wilhelm’s menu concept focuses on “Regional Americana” (oddly, the same phrase I heard last week from soon-to-be Skyloft in downtown Laguna Beach). It seems that everyone and his brother likes moseying through this land of rich, down-home comfort food. The restaurant is a jangle of happy noise with singles, families and visiting business groups of all ages.

“The Way Diners Were Headed”

This is Wilhelm’s second Jimmy’s location, the first of which sprouted in Point Loma’s new marina in early 2010. Next week, Wilhelm will be opening a third Jimmy’s in Woodland Hills, and looks to expand to another three in the next 10 months with “a grand total of 17 or 18” in Southern and Northern California in two to three years.

“In 2009 when I first started considering the concept for the Point Loma location, the whole gastro pub and Euro pub concept was in full bloom,” says Wilhelm. “I’d just finished doing some gastro pub mini-concepts with HMS Host at the John Wayne Airport, and felt like this was the way diners were headed. It’s just more approachable, casual and fun,” he adds.

“But rather than going in the Euro pub direction, I wanted to infuse a celebration of regional American cooking … the real foundational food that sets our country apart,” says Wilhelm.

Wilhelm’s dinner menu in Dana Point doesn’t fetch far from his original Point Loma menu. Its “Starters” menu boasts at least 15 items, many of which make an appearance on the discounted happy hour menu. Soups and salads, a handful of innovative flatbreads and monster hamburgers and sandwiches actually precede the “Large Plates” portion of the menu, which doles out another 15 options, from prime rib to Steak Diane (one of my, ahem, favorites), as well as gumbo, ribs, Rib Eye and “Spice Crusted Salmon.”

At a recent Friday happy hour with six girlfriends, we order a raft of goodies from the happy hour menu, including Brussels Sprouts, Baby Back Ribs, Grilled Flatbread, “Dueling Southern Dips” and Jimmy’s deadly Housemade Potato Chips. The food arrives in large, heaping servings and the bill is less than $35 for the five dishes combined.

I don’t know how my friends patiently waited as I photographed their food orders, but here’s a quick rundown of that happy hour session:

The Charred Brussels Sprouts were quite awesome as they were churned with chunks of smoked bacon, toasted pine nuts and maple syrup.

The Chipotle-Bourbon BBQ Baby Back Ribs (with fries) is probably my favorite happy hour item here at Jimmy’s. A stack of ribs come stacked on a mound of hot fries, and the ribs are melt-in-your mouth goodness.

Yet another dish, Dueling Southern Dips offer a haystack of Pimento cheese and a second haystack of freshly made Roasted Corn & Poblano Guacamole with a pile of tortilla chips separating the two contenders.

If I can warn you off of anything on a purely selfish more-for-me agenda, The Warm Housemade Potato Chips are drizzled in blue cheese sauce and scallions. They are terribly addictive.

Then, of five flatbread offers, we chose the Pear, Black Fig Jam & Gorgonzola, which is also topped with mellow Fontina cheese, prosciutto and arugula. It was the first to disappear from the table.

Everyone Loves Comfort Food for Dinner

The Buttermilk Fried Chicken arrives with a thick, crunchy coating and sits atop garlic-mashed potatoes in thyme gravy. A serving of freshly sautéed green beans rides alongside this masterpiece and, well, we both feel honorably comforted. Mission accomplished, Jimmy’s.

Pricing … What a Concept!

Clearly, the food isn’t the only comfortable quotient at Wilhelm’s latest concept. With the Boneless Rib Eye Natural Certified Angus Beef topping the menu pricing at $37 and the majority of dishes falling in the $15 to $24 range, Jimmy’s is a significantly different approach than Wilhelm’s former restaurants such as French 75, Rouge, Chat Noir, Bistro 201, Zuni Grill, Chimayo Grill, Diva and more.

“It was a much more casual concept than the usual fine dining I’ve done,” Wilhelm agrees, “But it’s been one of the more fun experiences, too.

“This is a menu I’ve really loved concepting and, of all the concepts I’ve developed, there’s more loyalty and frequency with Jimmy’s – people like their casual dining presented a lot of different ways, so we’re doing our best to fill that ‘variety niche,’ and they’re showing up two and three times a week … I think we’re making our point in perceived value.”

With each restaurant, Wilhelm makes his tweaks. In the Dana Point location, Wilhelm graduated in actual footprint from Point Loma’s 150 seats to 220, and installed colorful fire pits and a lengthy U-bar as well as community tables in the bar and dining room.

At the same time, he expanded menu offerings and created “a more aggressive wine program” with an expanded bottle list and six wines on tap at any one time.

“I’ve spent my career doing multiple brands and it’s refreshing to focus on a single brand, a single concept,” says Wilhelm. “I’m tinkering with it all the time.”

“I’ve never not had fun in this business, but I have to say … Jimmy’s is some of the best fun I’ve had in a long time.”