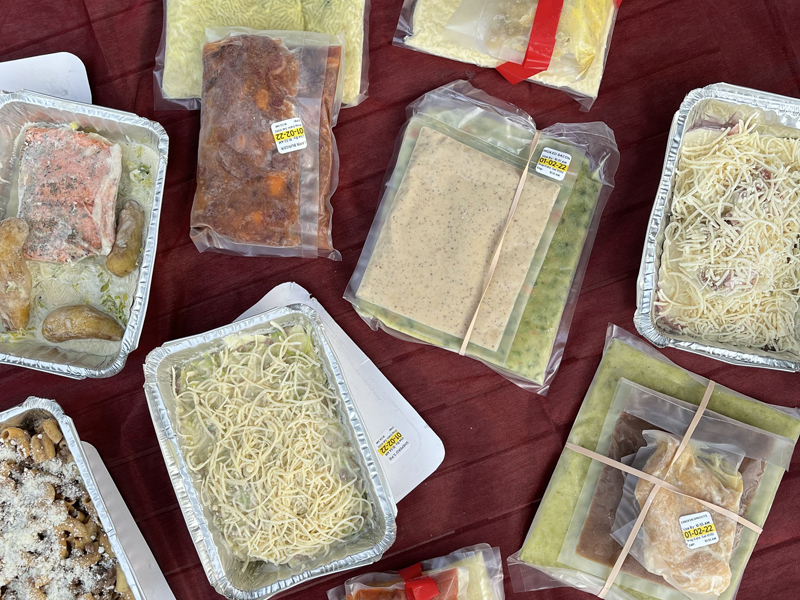 This holiday, while perusing some of my favorite Laguna Beach restaurant sites for various take-out options, I stumbled across an amazing deal that almost seemed too good to be true.

Brussels Bistro had begun a new offer: A subscription of $89 a month gets you 10 new chef-crafted meals, all delivered at once to your door. You pay tax and optional shipping if you want these meals sent … anywhere. I could, realistically, send these same meals to my Mom in Oregon.

One of the finer restaurants in Laguna Beach offering 10 foodie items for about $9 per? This was a no-brainer for me. I might have been their first subscriber. 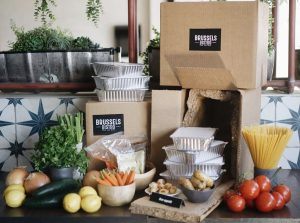 Of course, Brussels can deliver all 10 meals at once because they were the first – and still the only real primary player – in Laguna Beach to come up with dinners delivered sous vide style.

Sous Vide was developed by French chefs ages ago. Its cooking technique vacuum seals food in a bag to then cook in a low-temperature water bath, allowing the food to baste in its own juices. The process delivers perfectly cooked-to-temperature foods.

Brussels Bistro simply creates a number of newly-crafted dishes, and then individually vacuum seals and flash freezes your month’s allotment of 10 meals.

Gourmet Meals in a Bag

While the $89 monthly subscription is new for Brussels Bistro, their classic sous vide style is not. This is a technique they’ve used in their kitchen for years for even the diciest of dishes.

When COVID hit last March, it was a matter of days before ingenus business partners Thomas Crijns and Nicolas Servais came up with a combination of fresh-made, refrigerated or frozen sous-vide packs of everything from their famous Mushroom Soup to their quite delectable Boeuf Bourguignon.

Every meal comes with directions for baking, cooking, or simply sliding a plastic pack into a pot of warm water on the stove. Not ready to cook it all up? No problem. Store your tidily vacuum packed food in your refrigerator for three days or in your freezer indefinitely.

Even better: Simply call in your order 24 hours in advance. Then, drive down to pick it up in the alley in Laguna Beach behind the restaurant for contactless delivery. Just pop the trunk and they hustle out, place it in your trunk and you’re off and running. The same service is available at their San Clemente store.

Last spring, my dear foodie friends, Terri and Greg, were the first to avail themselves of this new Brussels Bistro style, and they were all raves. Once I jumped in, I was all in, too. The food is remarkably great and I kind of feel that pride of cookin’ ownership because, hey, I’m at least turning on an oven or warming a pot of water.

Over the summer and into the fall, Brussels continued to expand on its sous vide menu options. Their online menu is quite extensive now. And, with each month the delivery is somehow more polished and slicker.

At Christmas, I picked up a number of items packed into a single box with a small QR code sticker on its lid. On their instruction, I just pointed my phone’s camera at the sticker and all the cooking directions for my box of entries slid silently into view. It’s that easy.

A Cornucopia of Coveted Food

About a week ago, having given up on my ability to actually drive from South Laguna into Laguna Beach for my January subscription order, Nicolas called and offered to drop it at my door on his way back to San Clemente.

He left a giant brown shopping bag at my door, filled to the almost-brim with sliver after sliver of frozen dishes. Additionally, four meals (also frozen) nestled at the bottom in take-out oven tins. 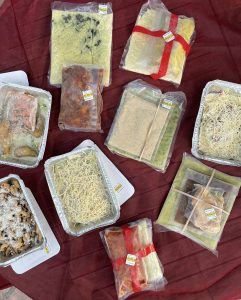 January’s 10 meals on the subscription plan from Brussels Bistro

I felt like an astronaut packing away space shuttle food in my freezer. This was too good to be true.

I chose Roasted Salmon for my first entrée, and while it defrosted, I looked up my January cooking instructions on the website. Beneath the instructions for cooking the various dishes (whether in tins or bagged for warm water plunge), I explored my January menu:

As you look at these thin slivers of what will be your meal, you may wonder if the serving will fill you up. Believe me, they are beyond hearty in serving size. The Roasted Salmon, atop a roasted celery and fennel cream sauce, turned out to be two servings for me.

Salmon can be a fickle kind of fish (especially when frozen), but Brussels’ version was moist and perfectly cooked with a sauce that was impeccable. 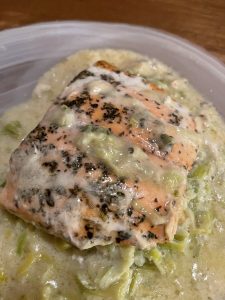 I decided to invite two friends over on Sunday for more testing trials. As social distanced as we were, it was one of the most fun dinners I’ve hosted. It offered a potluck dinner of tastes with “gourmet” being the emphasis on the potluck. This was no Sunday-after-church potluck. 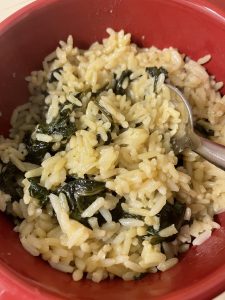 For me, I find it most difficult to believe that you can properly cook and sous vide a complicated mix of risotto or couscous and, after simply dunking its bag in warm water, have it roll out perfectly plump and non-sticky just a few minutes later. I can’t even do this in real life. This was the case, though, with an oversized serving of Brussel’s fantastic Spinach Risotto and the Chicken Tagine’s underlying couscous.

We loaded each serving into medium-sized serving bowls and began passing everything. We tried just four dishes and, between the three of us, still had leftovers.

The Chicken Tagine, a bow to Moroccan flourish, was braised perfectly in spices, olives and a hint of zesty lemon. The chicken was tender with layer after layer of spice flavor crowned in briny olives. 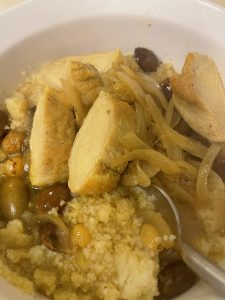 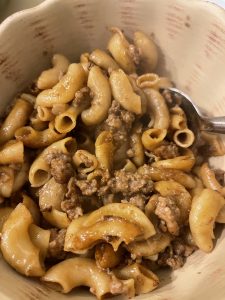 Brussels Bistro’s generically named “Beef Pasta” was more of a classic Hungarian Goulash with its American take – prime ground beef- serving as the protein. I just finished those tasty leftovers for lunch today. It is the kind of awesome comfort food we all need these days.

The last dish, simply named “Chicken with Bell Peppers,” was as equally lovely. More of what I would consider a Chicken Cacciatore, it hosts large chunks of chicken simmered in a peppers and onion tomato-y sauce. 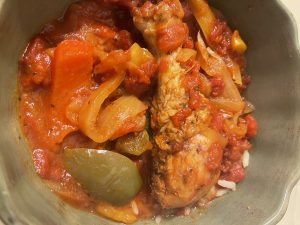 Spoil Yourself Rotten While Supporting a Laguna Restaurant

Each month, the Brussels Bistro $89 subscription menu changes. Although I still have plenty of their food in my freezer, I’m already eager to see what February brings.

Thomas and Nicolas have always been serving up one of the most flavorful, internationally-based menus in Orange County. I happen to love the fact that I get to try menu items in this monthly subscription plan that are yet to be published to the rest of the world. This is truly a genius idea at an unbelievably affordable price. Go to BrusselsBistro.com to their “Orders Online tab to subscribe.

Note: Because of the amount of work that goes into fulfilling these menus and orders, please no substitutes.