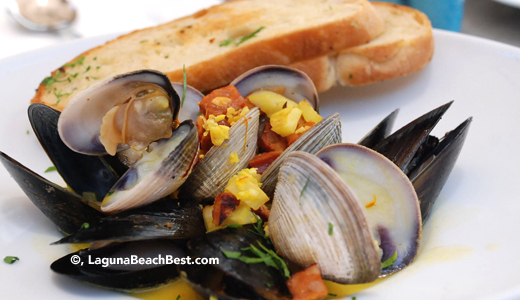 When Chef Rainer Schwarz and his team took over as owners of The (then struggling) Deck in Spring 2013, everything changed for the better. And I mean everything. Extensive renovations took place in April and May, which included the creation of The Deck’s own kitchen (food was previously prepared in the former Beach House kitchen and trekked down flights of stairs to diners).

Then, Chef Rainer and his team of culinary wizards moved fully into play in June, 2013. Happily, The Deck on Laguna Beach has never been the same since.

Oysters For All Seasons

At The Deck, Chef Rainer likes to keep the menu simple, offering between 10-12 small plates and another 10-12 entrées, with more frequent “change ups” occurring on the entire menu every two to three months.

Even the perennial items such as oysters change per the season. “Our oysters area always extremely fresh, but in the summer, I like to offer smaller oysters like the Kumamoto and Kusshi. They tend to be lighter and are very flavorful. They go well with summery wines.”

They do, indeed. The oysters are served up with a grated horseradish, mignonette (minced shallots, pepper and vinegar), plenty of lemon wedges and a darling teeny bottle of Tabasco.

And More From the Sea 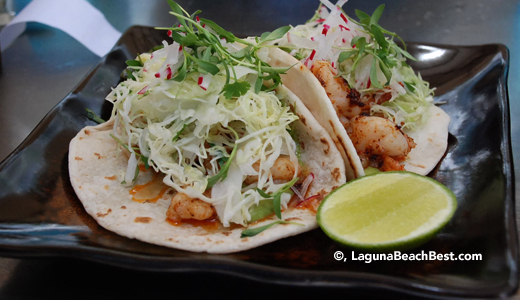 Chef de Cuisine Jesse Bajana trots out to explain the next dish – one of his favorites, The Deck Tacos. He is absolutely effervescent; he is so passionate about his food. “We have this awesome chorizo, so we basically melt it in a pan and then baste the Mexican white shrimp,” he says with a cheery smile.

He explains that the avocado salsa verde comes compliments of initially wolfing down street tacos on Olvera Street in L.A. “I love how they used coriander and scallions to really perk up their salsa verde, so I adapted that taste, added a few other spices and just fold in the avocado … and we end up with a fun signature dish.

Then, it’s on to yet another crowd favorite in the “Small Plates” division, the Steamed Venus Clams & Mussels. Ladled atop the shells are sublime chunks of Portuguese sausage, which somehow meld perfectly with the clams and mussels. And, the fennel saffron broth they serve with these fortunate shells is something I would drink with a straw … all day long. Seriously, it’s one of the finest accompanying broths I’ve ever been served with any sort of shellfish.

A Solid Variety of Entrées 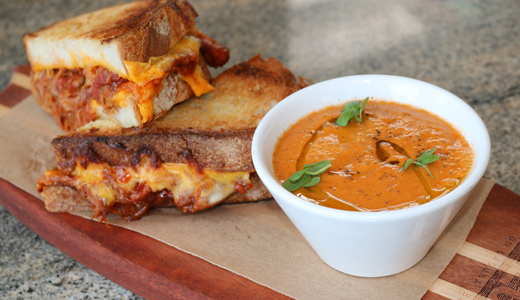 In the entrées category for the summer menu, the chefs agree that the Grilled Cheese and Beach Burger are well-deserving favorites among diners.

In hopes of going a bit lighter in our fare, we choose the Vancouver Island King Salmon, instead. The fresh salmon arrives atop a generous swirl of English pea coulis, tender Oyster mushrooms and roasted, slightly caramelized Cipollini onions. 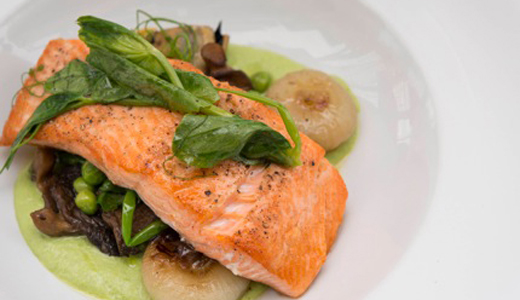 At this point, we’re stuffed to the point of breaking. It’s not difficult to sit here, lulled by sunshine, the ocean lapping at the shore, enjoying what has arguably become one of the better food experiences in Laguna Beach. Thanks to Chef Rainer and a team that never stopped believing, it’s great to see The Deck smoothly firing on all cylinders.