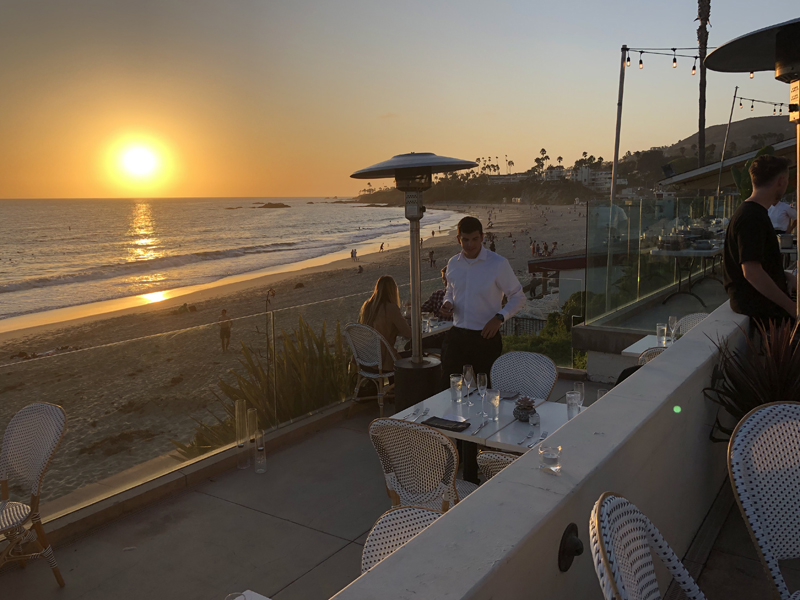 Sometimes, when I feel like my life is nearing an alarming level of chaotic flurry, God/the  gods/angels have a pow-wow on how to give me a break.

Things are so busy in my life right now that they know they can’t send me on vacation. So, they decide, instead, to bring the vacation to me. It happened two nights in a row a little over a week ago.

On Thursday night (Sept. 19th), it was my first visit to the astounding Rockledge estate for Girl’s Night Out in behalf of Boys & Girls Club of Laguna Beach.

And Friday night (Sept.20th), it was a pop-up dinner at none other than the Hotel Laguna deck, compliments of the booming Dining Project OC.

Hotel Laguna Back in Biz? 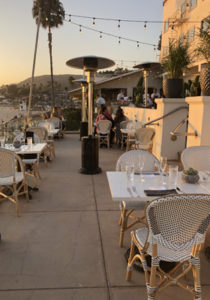 As I wound my way down the outside steps to the hotel’s beachside deck, Hasty Honarkar, was the first to greet me. (In case you’ve been living under a rock, the Honarkar family and 4G Ventures is steering the renovation of the Hotel Laguna and its surrounding spaces.)

“We were really taken with what James and Patrick are doing with The Dining Project OC,” Hasty said. “And we have all this space here that’s just sitting here … so, while we work on the bigger plan, why not breathe some life into this place where we can?”

“This place” is the two-tier patio expanse and what I personally consider the best view in Laguna Beach. From the Hotel Laguna deck, you have 180-degree views up and down the coast with the added plus of waves washing up on the sand just a few feet away. It is truly remarkable and one-of-a-kind.

I was expecting a large crowd at the dinner and was pleasantly surprised that there were just 23 of us.

“We purposely keep our dinners smaller in size so that we can produce a relaxed chef’s dinner,” said Patrick Femery, a co-founder in The Dining Project OC. “We can be more interactive with our diners and we can create more attention and give more explanation for each dish to create a real appreciation for the food.”

The Dining Project OC was just a random idea that came up between two buddies who worked at Surf & Sand’s Splashes restaurant. Patrick Fremery was a server with a chef’s background, and James Caveness was the Splashes sous chef. 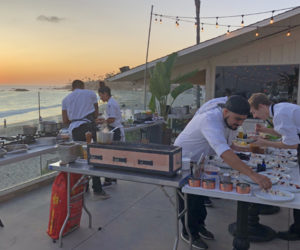 Initially, the two joined forces to do a private dinner for Patrick’s family and everyone enjoyed the event so much that the two chefs got to thinking. m”Why not do these small, private dinners and make it a for-profit venture? If we could find places to cook, we could do pop-up events at will … a sort of nomadic approach. It seemed like a workable idea,” said Patrick.

Workable, indeed. Their first event in June sold out almost overnight. Every event since then has experienced the same rush for ticke 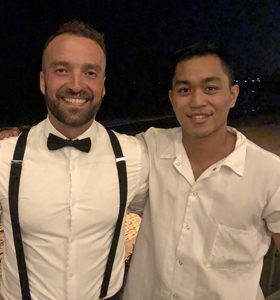 Although born in New Jersey, Patrick’s family moved to their native Argentina when he was an infant. He didn’t return to the states until he decided to spend a ski bum’s winter in Colorado’s Beaver Creek. He got involved in the restaurant industry at that time and, through moves to Italy, Spain and Maui’s Ka’anapali Hotel, Patrick honed his serving and chef skills. Eventually, Patrick and his wife settled in South Orange County, and he went to work at Splashes.

Meanwhile, James had grown up in love with food and cooking, and followed a more traditional culinary route, landing at Splashes to work with talented Executive Chef Ron Fougeray.

“I really loved the experience of working with Ron,” said James. “But this pop-up idea was such a passion for me, and the business partnership with Patrick came together so smoothly, that I made the decision to jump to this full-time a few months ago.”

All in the Details

“This” is a spectacular meal. While James and his chef’s team work on meticulously plated dishes, Patrick runs the “front of house” with a few attentive servers in tow.

“James is in charge of the menu, but my wife and I get to do tastings and recommend this or that,” said Patrick. “Being Argentinian, I’m a meat-and-potatoes guy, so James adds real flair to every menu we do.”

Before each dish arrives, Patrick circles to each table to explain the next wine pour’s compliment to the upcoming dish. James follows with the dishes, taking a moment at each table to walk through every detail of the creation.

Every dish is fresh and bright: 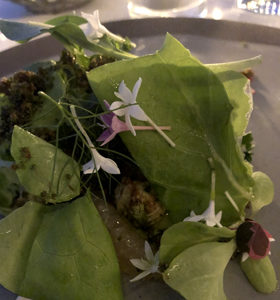 The Garden Salad’s many additions are grown on James’ request nearly 30 days in advance by a partnered purveyor.

The Red Snapper was caught yesterday, its bones simmered with ginger for eight hours to produce the “roux” for the purée.

The Tortellini’s bolognese is made of beef tongue.

The Grass Fed Rib Eye was dry aged for 45 days.

The Banana Cake is Mom’s recipe. Buttered in date jam, it’s the foundation to a deconstructed bananas foster with cream cheese ice cream, to boot. 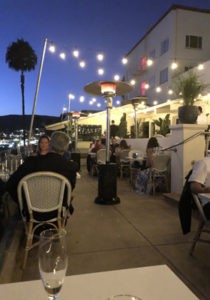 True to its promise, this is a relaxed respite from the usual hustle and noise of a dining experience. I need more of these. In fact, we all do. And, as a Laguna resident who dearly loved decompressing on Hotel Laguna’s dining deck, I have happy hope for its evolution. This was a magical and perfect solution for the old girl. I think it gave her hope, too.

Look for the next Dining Project OC popup at TheDiningProjectOC.com