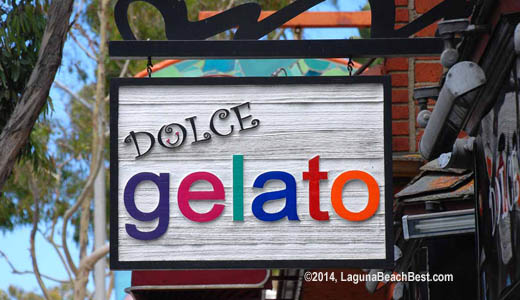 Now that we’re officially in June and the “gloom” doesn’t even seem to be lingering, it’s time to start celebrating summer. There’s nothing more fitting for this particular topic than a check-in on the glorious Dolce Gelato on Broadway.

Frankly, there’s nothing like Dolce Gelato in the world, and it is the only one in the world. Owners Rick and Claudia Baedeker opened the shop in May 2010, based entirely on Rick’s love of making homemade ice cream for his family.

“Our Dad was a nut about homemade ice cream,” says Danny, Rick’s son who now manages the Gelato store. “He’d be trying all these flavors and fruits … so it wasn’t a surprise to any of us that he eventually decided to open a gelato store.”

“We go through at least a pan every day on every flavor, so we’re spending a little more than eight hours a day making gelato just for our shop. And then we start in on our restaurant orders,” quips Danny as he trots back to the big gelato machine just in time to catch more emerging frozen goodness.

Gelato-making is a two-part process, but that process is done two different ways. Rick attended “gelato school” in New York, and learned how to make gelato the way most shops in the U.S. do – create a foundational base, cook it, and then fold in flavoring during the freezing process.

When Rick started turning out initial batches, though, he wasn’t pleased with the depth of flavor. So, the family made two genius decisions. 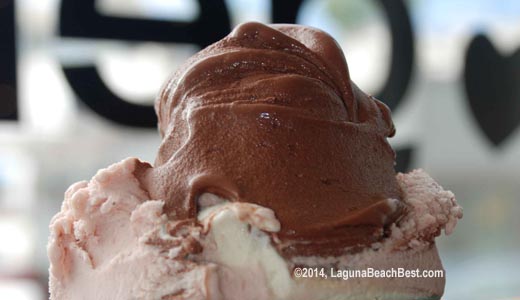 First, they sought out the “queen of gelato,” Italian American Maria Coassin, Owner of Seattle’s famous Gelatiamo. In an exclusive agreement, she agreed to teach them how to make Italian gelato, and worked side-by-side with them until they had it perfected. She also shared a handful of her best-selling recipes with them, and the business tide at Dolce Gelato immediately began to turn.

Instead of creating a base with folded flavors, Coassin’s old school method insists on creating one gelato recipe as a whole, thereby adjusting and blending appropriately for the added fruits, vegetables and juices. The recipe is cooked (who knew gelato was cooked?) and frozen in one meandering, melding process. Then, the gelato machine is completely sluiced with water and the next recipe begins.

“You put something as basic as our chocolate gelato up against anyone else’s and you’re going to immediately taste the difference,” says Danny. “Aside from the fact that we use very high-end, fresh ingredients and spices, the whole cooking process changes everything.”

Then, the Baedekers brought on Gelato Chef Lindsey Nelson. (Hey, if you’re going to create three new flavors of gelato every single week, you have to bring in the big guns.) “Lindsey is the most creative person I’ve every worked with,” says Rick. “For Lindsey, gelato making is an adventure, and she loves the challenge of coming up with our amazing flavors.

“Coming up with three new flavors each week really gives me an opportunity to try all sorts of ideas,” says Lindsey. “So, one week in the fall a couple years ago I tried Salted Maple Caramel, and it’s been our crazy seller, every single day since.”

Lindsey’s Chocolate Habanero gelato has nearly topped regular Chocolate orders, and her version of “Teddy Grahams” with Muscovado brown sugar, honey and spices disappears about as quickly as the pan is put in play. Then there are the “herb” gelatos – Fresh Mint, Fresh Basil, Fresh Sage … the creativity is endless

“I wasn’t so crazy about Lindsey’s Sweet Pea gelato,” says Danny. “But her Sweet Corn gelato is out of this world.”

Homemade Recipe Extends to Cobblers, Too 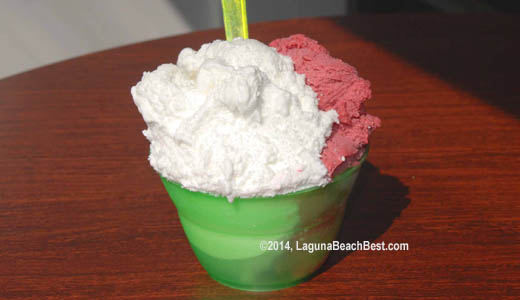 On the sorbet side, Dolce Gelato offers “regular” and “non-fat” with favorites being Grapefruit Hibiscus, Strawberry Mango Lime and Arnold Palmer. If you’re not a dairy person, you can also try Lindsey’s almond milk creations (chocolate still the best seller there).

Feeling more decadent? Dolce bakes its own waffle cones each morning from a family recipe, but if you’re going after baked goods, you simply cannot pass on the homemade cobblers, compliments of Claudia Baedeker.

The single-serving cobblers joined the party about a year and a half ago and, depending on the seasonal demand, the shop’s convection oven is busy every morning with new cobbler batches of Peach Raspberry (my favorite), Blackberry, Strawberry/Rhubarb, Blueberry/Coconut and Chocolate Lava Cakes. The cobbler is served warm with your option to add any gelato scoop of your choice.

I don’t know if I need to write anything more after that last sentence. It is sheer heaven. 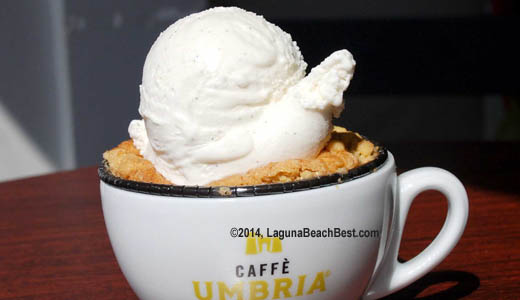 “Our first year was terribly tough,” says Danny. “The summer was foggy and cold and the winter was so much rain. No one was here.

“We had real worries about whether we’d done the right thing, but then the clouds cleared and the rain stopped, and every month of every year has been better than the month before.”

Dolce quickly learned to expand its night hours beyond other “snack” shops (10 p.m. weeknights and 11 p.m. on Fridays and Saturdays, year-round). It also added catering to its docket about a year ago, and supplies an endless number of parties, wedding receptions, bridal showers and more. And, area restaurants from San Clemente to Corona del Mar are ordering Dolce Gelato by the heapful.

Tourist foot traffic heading to and from the large parking areas around Broadway has definitely helped in the summer, but even off-season crowds have grown, packed with regulars and locals.

“Even though we’re right on Broadway, it’s not necessarily a convenient place to find parking or stop in,” says Danny. “So, it means that much more to us when so many people continue to make the effort to come to us. We have an amazing local following now, and it’s expanding regionally now.

“We have people who tell us they’ve made the trip down from L.A. for our gelato,” he adds. “Or, they had Laguna locals introduce them to our place, and now they come back on their own initiative. Hearing those kinds of stories makes this all worthwhile.”

A professional writer for 30 years, Diane Armitage is also the author of the book, The Insider’s Travel Guide: Laguna Beach’s Best.