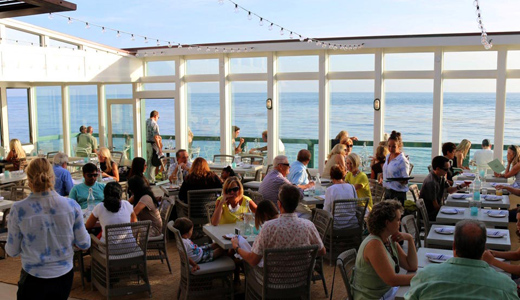 For months I’ve been waiting for this moment. I’ve finally walked through the doors of the new Driftwood Kitchen, the eagerly anticipated restaurant in the old Beach House location.

At one point in our rich Laguna Beach history, the Beach House was our grand dame restaurant, serving thousands of meals in an old world setting. Even though the girl grew tired in her last few years, there was a great gnashing of teeth and demonstrative mourning behavior from the valiantly loyal when she closed her doors.

The day Chef Rainer Schwarz and partners John Nye and Colby Durnin stepped in to create their new idea, they knew they had very big shoes to fill.

Happily, the minute you step into the new Driftwood Kitchen restaurant, you suspect they’ve already met their goal.

They seem, though, to be stepping in quite enthusiastically.

No Longer In Through the Out Door

The Driftwood Kitchen experience begins with actually stepping through the front doors of the restaurant rather than the backside of what the Beach House customarily used.

“It didn’t make sense to us that people would have to walk through the dark bar and find their way through a dark hallway to actually arrive at the restaurant portion,” says Nye, who was in charge of the complete rehabilitation of the restaurant itself.

Now, when greeted by hostesses at the top of The Deck stairs, you’re led through the revamped “living room” (which serves as a great, airy waiting room) to the actual restaurant side of Driftwood. The mere shift in entry is, frankly, breathtaking.

“I wanted THIS to be your first impression,” says Nye with a sweeping gesture that takes in white walls and beams and towering windows framing ocean and sky.

It’s a great introduction, this is for sure. If anyone remembers the old Beach House with its dark restaurant interior, it seems that the Driftwood Kitchen’s wall space has shrunk, while its windows have dramatically increased in stature. Not so. The walls and the windows are exactly the same dimensions as they were before. This is an historical property – the new management wasn’t even allowed to replace the glass panes of the existing windows. Somehow, though, it is an amazingly different vibe.

Nye likes to hear this, particularly as the Driftwood’s new tagline is “a classic California Coastal vibe.”

Even “the big blue tarp” over The Beach House restaurant (which you can still spy on Google Earth satellite photos) has disappeared. For a temporary time, you can enjoy clear, unadulterated blue sky … the new awning arrives a few weeks from now, and it will be light taupe in color. “We want to keep it airy and light in here – no more dark blues except what you see out there in the sea,” says Nye.

Still Embracing the History
Walk the short hallway back to the bar, and you’ll discover an entirely different look and feel. While the partners first thought they’d shift the bar to a lighter concept, too, they decided, in the end, to embrace the beautiful dark wood of the original edifice. 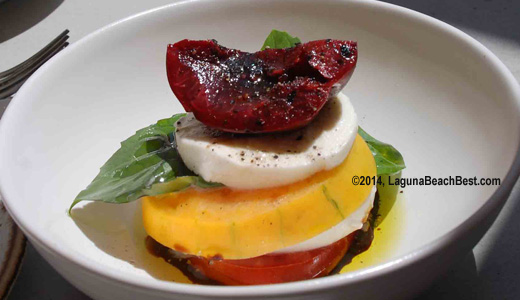 “This was one of those projects where you start cleaning up the walls and you discover a real treasure,” says Nye. “So, we decided to maintain the same “stateroom” feel of the original bar, and added in touches of sophistication and warmth.”

The team also added a glorious copper bar, a substantial line of high-end whiskeys and scotches, and updated the patio on the backside of the bar with couches, Adirondack chairs and a crackling fire pit.

“Actually, that’s what we intended,” says Nye with a big smile. “This is now more of a compound of culinary and sight-and-sound experiences – we have the Bungalows and the Deck below … we have the more upscale experience of The Driftwood here … and, then, The Stateroom with the adjoining the back patio.”

Created for the “Locals’ Palates” 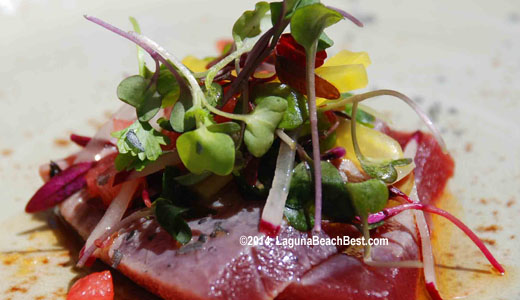 While The Driftwood Kitchen is an elevated experience, both literally above The Deck, and figuratively with a more expansive and exotic menu, Chef Rainer prefers to call The Driftwood an “elevated casual” restaurant.

“Ultimately, we’ve built this restaurant for our local clients. Laguna residents don’t need pretentiousness or stiffness,” says Chef. “But they do possess sophisticated palates. Food is a big thing in this town.

“So, we created a menu that is amenable to every client we welcome, but it had to be creative enough for our local clients who we hope to have dining with us repeatedly.”

If anyone knows how to innovate a “creative” menu, it’s a Chef who’s been doing this for more than 30 years. Chef Rainer was initially an apprentice at the age of 15 in an Austrian castle that had been converted to a fine dining restaurant. He has since devoted his life to steering a multitude of global restaurants to greatness.

When he and his partners won the bid to purchase The Beach House property in March 2013, they expected a usual 60-90 day retrofit. The “retrofit,” however, turned into a 14-month process, leaving Rainer to think and think again on the menu he would serve here. As the real beauty of the place began to emerge, Chef believes his untested menu evolved in similar manner. 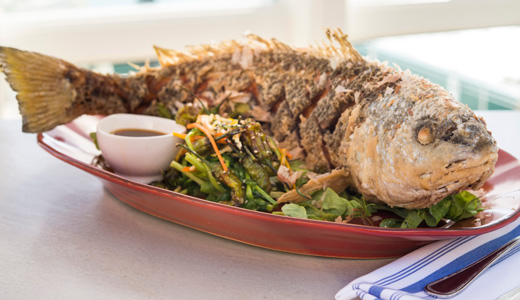 Take, for example, the one menu item that’s already the talk of the town (three days into business) – Chef’s Texas Redfish. “Most times when restaurants serve whole fish, they do grouper of catfish and it’s always tasted flat to me,” says Chef. “So, I choose Redfish or Branzino, which are both super moist fish, and then we create a specific oil base that we add all sorts of flavored oils and herbs to before flash-frying the entire fish.”

End result? A spectacular presentation that is melt-in-your-mouth fabulous.

On my visit at a sunny table overlooking the Pacific blue, we tried a sampler of the Lobster Bisque (light and flavorful) and a gorgeous serving of the Caprese Salad, comprised of a towering stack of thick Heirloom tomato slices sandwiching creamy Buffalo mozzarella and basil leaves with a grilled plum at the crown.

Then, it was on to the Hawaiian Ahi, flash fried, dredged in Ponzu sauce and served with pickled vegetables.

Clearly, I hadn’t had enough fish for the day as the Atlantic Halibut filet showed up next fingerling potatoes, corn fricassee and English pea sauce. Delectable, not a flaw in any of the servings.

Renowned Laguna Cocktails Live On
Interestingly, while Chef Rainer pays tribute to The Beach House’s most popular items (the Lobster Bisque, and a “Surf & Turf” Maine Lobster Tail with Tenderloin), Nye has done the same with the bar menu. 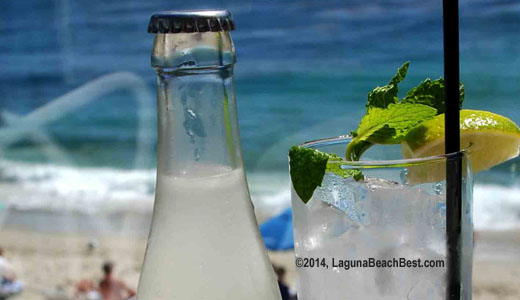 With help from Bar Manager David Anderson, the Driftwood team pays homage to our beloved “fallen restaurant warriors” with specialty drinks not only from The Beach House, but also from the The Royal Hawaiian, The Boom-Boom Room, and more.

But, just like his kitchen compadre, Nye steps out on the ledge with new inventiveness such as his own bottled Moscow Mule, and the most innovative wine menu I think I’ve laid eyes on.

Rather than the usual “whites to deeper reds” lineup, or a roster of wines by the country, Nye created “moods.” As an example, “True North: Find Yourself” offers wines that stay absolutely true to their varietal. “Castaways” offers wines that are “a little outside the box,” says Nye, while “Overboard: You’re in the drink” are the “craziest wines” he’s yet discovered.

And Then the Pastry Chef Arrives …

Dang, those pastry chefs. This one – René Baez – worked with Chef at The Roosevelt Hotel in Hollywood.

He saunters out with Tempura Fried Ice Cream (three ice cream balls – chocolate, vanilla bean and caramel) and talks about his Sticky Toffee Cake and Banana Split. Apparently, the unusually designed banana split is an excellent crowd pleaser, but I’m not hearing very well as I’m wholly and completely focused on my Fried Ice Cream Ball (I wondrously chose the chocolate).

Between heavenly bites, the chefs, bar managers and founding partners chat with me about why we adore Laguna Beach and its people. They’re genuinely jubilant working in this place, and they’re committed to the Laguna experience, even body boarding as a team most mornings in front of the restaurant they’ve resurrected.

“The goal here was to give this beautiful restaurant back to the locals in all its glory,” says Nye. “And, with what Chef Rainer is doing with the food, we think our regulars will be as proud of the effort as we are.”