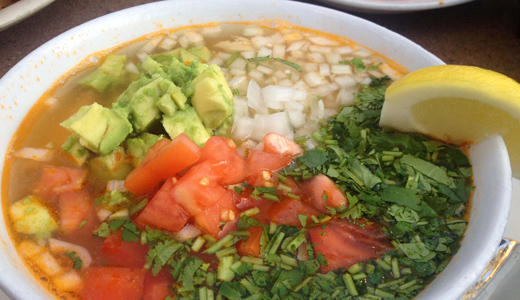 A couple years ago, I realized that months were passing between visits with one of my good friends, Rhonda. So, we established a standing monthly “Soup Date” at Avila’s El Ranchito Laguna Beach to ensure we maintain contact in our busy lives.

There’s just nothing better than Mama’s Avila Soup, a giant bowl of their version of “chicken soup for the soul” with chicken, rice, avocado, cilantro, onions and tomatoes. It arrives steaming hot with a full set of warm tortillas. It’s a soup I’ve ordered “to go” more than any other item in town, and it’s the same soup I’d scoop up on my way home to thaw my bones from a freezing outrigger practice.

“We’ve had people call us and tell us that they’re so sick they can’t even come in to the restaurant to pick up their soup,” says Michael Avila, grandson to founders Salvador and Margarita and owner of the Laguna Beach restaurant.

“We tell them to just come down the alley behind the restaurant for a quick pass-off. They usually drive up in their pajamas, bless their hearts.”

The soup is a crowning comfort food, assuredly. And, if you think about it, that’s what Avila’s El Ranchito Laguna Beach is really all about – comfort Mexican food. Every item, from the front-runner Guacamole Fresco on forward is a big heap of goodness and love, originated by now-90-year-old Grandma Margarita Avila.

Avila’s El Ranchito enjoys 11 locations in Orange County, having first opened in Huntington Beach in 1966. Each restaurant is owned and operated by a family member with about 80% of the menu still featuring original items from Grandma Margarita. Each owner, based on his or her community’s feedback and desires, completes the remaining 20% of the menu.

Michael first stepped into the ownership side of the business when he and his wife, Christine, helped his dad (Victor) open the San Clemente location. They began two days after returning from their honeymoon in 2003, and their dog, Hallie, immediately took up the greeter’s position at the front stoop.

The Avilas so endeared themselves to the community that when Hallie eventually passed away, one of the regulars crafted a statue of the dog that still stands at the restaurant’s front door.

In 2006, Michael and Christine stepped into their own restaurant ownership in Laguna Beach.

“When we heard this restaurant space was open in Laguna Beach, we jumped right on it,” says Michael, now 36. “Laguna Beach is a lot like San Clemente in that it’s got such a cool, beach vibe. People who live here actually go to their own beach, and that makes for a lot of happy, relaxed people. We absolutely love the people here.” 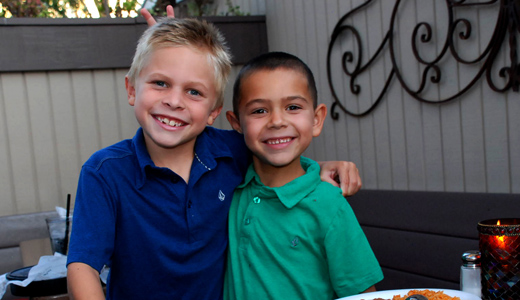 The next generation? Benson (8) and little brother Braden (6) Avila

As restaurateurs go, Michael is pretty darned happy and relaxed, too. He greets newcomers and regulars as if you’ve been longtime buddies. On his insistence, I bring my Soup Buddy, Rhonda, along with me, and we sit down with Michael, Christine and their two boys on the outside patio. We chat soccer, Breckenridge vacations and life philosophy as we mow through a mountain of incoming food. There is a natural friendliness and graciousness here, and Michael talks about his family and Grandma’s cooking with equal love and grace.

“ A couple weeks ago, about 30 of us went over to my Grandparents’ house for my Grandfather’s birthday,” he says. “And Grandma’s still in the kitchen, just like she’s always been, showing us how to create this or that,” says Michael.

“And I’ve got to tell you …we all re-create her recipes to the letter, but there’s just something about the love in her hands that makes her version better. She’s been such an awesome model to follow.”

Something For Every Comfort Need

From Day One in 2006, the Laguna Beach El Ranchito hasn’t missed a beat. Regulars crowd in on a daily basis, and visitors are drawn to the relaxed, friendly vibe.

The majority of the menu (that 80%) comes compliments of Grandma Margarita, and it’s an expansive collection of favorites.

For starters, breakfast is served all day long at El Ranchito with Huevos Rancheros actually selling in greater number in the evening rather than morning hours. And, Happy Hour runs Monday through Friday, 3 p.m. – 6 p.m. all year long. 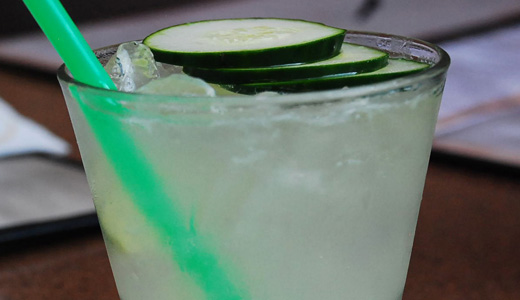 The margarita menu alone boasts more than 20 varieties, each of which is amenable to at least 30 tequila choices. (I’ve now become a swooning fan of the Coconut Margarita, but the Cucumber Vodka Margarita is a longtime favorite, too.) 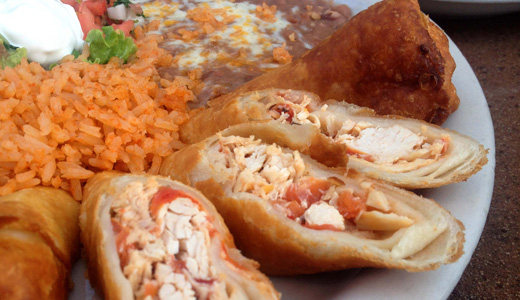 If it’s lunch or dinner you’re interested in, you might want to share a platter or two. We all shared Grandma’s Chingolinga a stylish, flaky pastry filled with the restaurant’s trademark slow-cooked chicken. It’s sliced into portions and served with a hefty dose of rice and beans. Another favorite we decide to share – the Botana Platter – is an obvious El Ranchito’s best seller with basted shrimp or carnitas served with all the fixings to create your own soft tacos.

The dear woman didn’t stop there, however, as the menu goes on for another three pages with rellenos, tacos, tamalas, flautas, enchiladas, burritos and every kind of combination. In our visit, we submit to the Azteca Burrito, a classic monster mash-up of shredded chicken and beans smothered in the “secret sauce” salsa ranchera, melted cheese, guacamole and sour cream.

”Give Them What They Want.”

Although every Avila restaurant cheerily replicates these tried-and-true recipes, each owner has plenty of latitude to flex the existing dishes and create and customize new items to his or her own community.

“The key to making people happy is simple,” says Michael. “You give them what they want.”

“When people want to order breakfast items, we give them ALL the breakfast items to choose from. When they’re vegetarians who are sick of eating salads, we came up with a great avocado burrito. When they’re waiting in line and their kids are starving, we’ll toss a quick cheese quesadilla together,” says Michael. 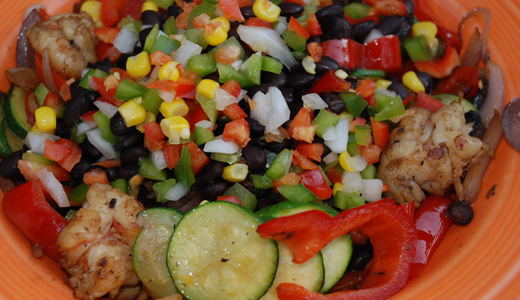 As the night wanes on, we bravely attempt to tackle the Fried Ice Cream (a raw tortilla bowl’s insides are sprinkled with Cornflake-like chips, topped with a mighty scoop of ice cream and then entirely dunked in a fryer for just under 30 seconds). 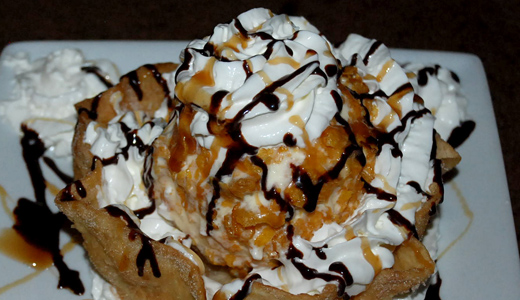 Somehow the conversation between us has rambled to a discussion on kids and adults who temporarily lose their way. Reflecting on something Rhonda has noted, Michael says, “The best anyone can do is give them love and show them a different way of life.”

Oddly, I realize, we have just landed on this restaurant owner’s life mantra.