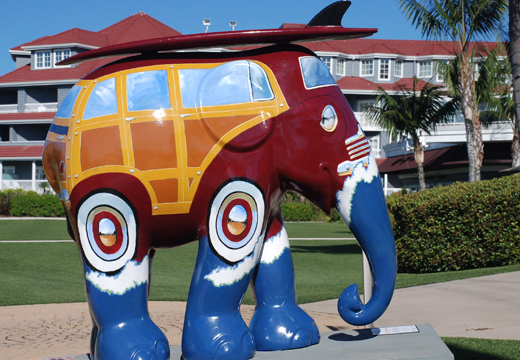 Every now and then, I’ve got to tell you about a great happening in another town – the Elephant Parade in Dana Point is one you don’t want to miss.

… Not that it’s very easy to miss. Just about anywhere you drive in Dana Point, you’re going to find charming, endearing elephants. No, not the 5-ton kind with the big, gray flappy ears, but life-size baby elephant statues of every imaginable artistic make and model you can imagine. The Elephant Parade – here in America for the first time – is dotting the Dana Point landscape until Nov. 17, and each and every one of these lovely statues is feeding new funding to the endangered Asian elephant.

The founders of The Elephant Parade, Marc and Mike Spits, were stirred to action when they met Mosha, a baby elephant that had stepped on an abandoned land mine at the age of 2. Mosha was fit with the world’s first prosthesis for an elephant. The father and son team were so inspired by Mosha’s determined recovery and adaptation to her new leg that they sat down to brainstorm an idea for a global crusade that would support the Asian elephant.

The Elephant Parade was born a few, short days later.

These statues, hand-painted by acclaimed artists, celebrities, renowned designers, dignitaries and more, travel to various cities with resulting auctions of the elephants donating a portion of proceeds to TheAsianElephantFoundation.org

That’s right. Fall in love with an elephant and you have the opportunity to own that baby in an auction process on Nov. 17th at the Laguna Cliffs Marriott.

A local artist and his own baby elephant

A couple days ago, when I was taking photos of elephants at the Ritz Carlton, I met local artist Alan Nowell, who was doing some touch-up work on one of the elephants. His own elephant – the first “Woodie” elephant to make an appearance in the Elephant Parade – is parked at the gates of the Marriott in Dana Point.

He said the “Woodie car” theme had been approved at national headquarters in the Netherlands, but that it took connections of connections to find their way to Alan. Just weeks before the Elephant Parade was to debut in Dana Point, the “blank canvas” baby elephant moved into Alan’s garage. “At first, I felt a little overwhelmed … I mean, how many artists have the opportunity to paint an elephant?” said Nowell. “But three weeks later, when I was finished, I felt so attached to her it seemed as if I was giving up one of my puppies.” 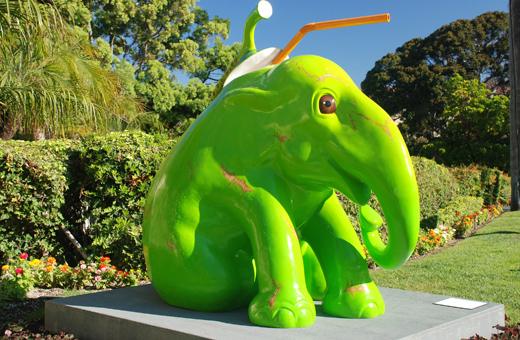 All of the elephants made their debut in Welcoming Ceremonies at Doheny State Beach at the end of August. From there, they were moved into locations everywhere, with large concentrations at participating resorts, the Laguna Cliffs Marriott, the Doubletree Suites at Doheny Beach, the Ritz Carlton in Laguna Niguel and the St. Regis at Monarch Beach.

For me, I love starting one of my runs at the Marriott, wending my way through the park and down to the harbor where the elephants dot my course. Each has a descriptive plaque that details why they appear the way they appear (like the Corn elephant, or the whimsical elephant at the Ritz entry that resembles a tropical coconut drink).

Bring an elephant home with you

The Elephant Parade has met with such global acclaim that three parades are currently on tour in the world with sister tours occurring in Luxembourg and the U.K. For us here in Dana Point, we have the opportunity to meander Dana Point these next two months and choose our own favorite baby elephant before the upcoming auction on Nov. 17th. To use Alan’s analogy, it’s a lot like picking out a puppy … but this time, you’re helping save a well-loved animal from global extinction. 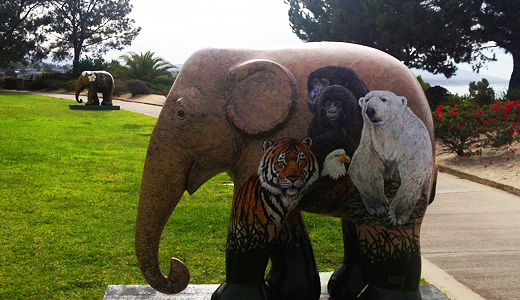