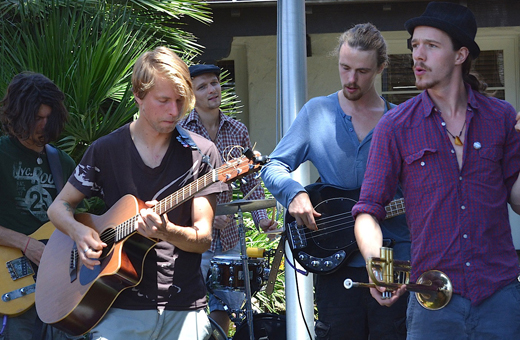 As we all know, sisters can add a note of interest to any family event, and our annual Laguna Beach “Fête de la Musique” is one perfect example.

A product of our Sister Cities Association, our 9th annual Fête is a full-on party in the streets with 35 live music venues throughout downtown from noon to 4:00 p.m. this Saturday, June 18th. I’ve got to say – it’s yet another truly unique aspect of Laguna Beach that you just don’t see in any other town in Orange County (let alone across the country … except maybe in Austin, my second-favorite town in this U.S. of ours).

Fête de la Musique was conceived by the American musician Joel Cohen in 1976 while he was working at a radio station in France. He proposed an all-night music celebration during the summer solstice, which was recognized by the French Minister of Culture, and subsequently held in France in 1982.

We might not do an all-night music deal (yawn), but we’ve created a fairly great rendition of the same.  The Fête de la Musique in Laguna Beach, which was awarded Laguna Beach Arts Alliance’s “2010 Best New Arts Program,” is held in conjunction with “World Music Day” to celebrate the coming of summer each June. LBSCA has crafted its Fête de la Musique to promote Laguna Beach performing arts through live music by singers and musicians.

So, here’s how the schedule works (and it’s all free, of course):

12 noon – Pre-opening festivities on the Main Beach Cobblestones with face painting and costuming, followed by a Children’s Parade at 12:30 p.m., with music provided by the Swing Set Band, a subset of the Laguna Concert Band.

1 p.m. – Opening ceremonies at Main Beach with remarks by Laguna Beach Mayor Steve Dicterow, and a representative from the French Consulate in Los Angeles. Sydney Halk, 10 years old, will sing the U.S. National Anthem, and Lisa Morrice will be performing the French National Anthem, La Marsellaise.

1:20 p.m. – Continuing performances at Main Beach by the Swing Set Band, JJ and the Habibis (Laguna Beach’s belly dancers), and The Agave Bros., who will share their danceable rock on the cobblestones from 2:30 – 4 p.m. and during closing ceremonies.

This year’s line-up includes Denmantau, a five-member band now based in San Pedro, whose members hail from Hamburg, Germany. These guys are high-energy bohemian/dance rock comprised of folk, funk, jazz, rock and other rhythms. Aside from multiple appearances at Mozambique (due to crowd demand), the group won the Emerging Artist Contest at Rusty’s Surf Ranch in Santa Monica, garnering the opening slot for Jefferson Starship at the Twilight Concert Series 2015.

Also in the line-up, The Budrows have the ability to transform any venue into a bona fide deep-south juke joint, full of revelers having themselves a modern good time in old-fashioned style. Vocalist Macarena Rivera, a 2012 graduate from Laguna Beach High School, lures audiences with her deep, exotic range, soulful instinct and stunning grace well beyond her years, and plays a riveting washboard. They’ve played locally at Mozambique and the Marine Room.

Want bluegrass? We’ve got bluegrass with this year’s entry, Bluegrass Country. They’ve been playing for 12 years together,  appearing at Fête de la Musique from 2008 to 2013 (the only performers to do so). Bluegrass is a special blend of roots and rhythm, something born and bred in the American South. Catch their sounds at Tuvalu corner (Forest and Glenneyre).

In the mood for blues? The Agave Bros., an awesome Laguna Beach band, was formed in 2015, but most of the guys have played together for about 13 years. The band plays danceable rock from the 1960s up until today. They put their own spin on music from The Beatles, The Rolling Stones, U2, Santana, Ryan Adams, David Bowie, Pink Floyd and even venture down the Motown path quite a bit.

Many, many additional musicians will be making guest appearances throughout the afternoon. Look for them on the Cobblestones again this year performing from 2:30 – 4 p.m. and at the Closing Ceremonies.