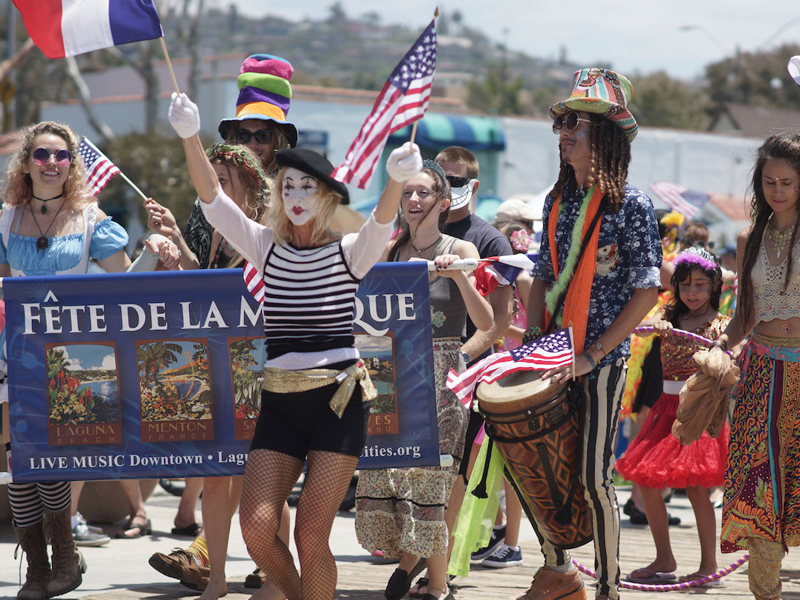 Photo above by Charlie Dickerson

On Saturday, June 15, the streets of Laguna Beach will be filled with music and much fanfare when the 12th Annual Laguna Beach Fête de la Musique presented by Laguna Beach Sister Cities Association (LBSCA) takes place. Originating in France in the 1980s, the Fête de la Musique, also known as the International Day of Music, celebrates the beginning of summer and the close affiliation Laguna Beach has with its sister city, Menton, France. The day’s events are free from noon through 4:30 p.m., and promote the lively arts through music by a variety of musicians, singers, and performers.

The day’s festivities start at 12 p.m. at Main Beach with the Laguna Community Big Band playing their first swing/jazz set. From 12 – 12:30 p.m., youngsters can get face painted and costumed for the Children’s Parade that starts at 12:30 p.m. Starting on the Main Street Cobblestones, kids will march up and down the boardwalk, and finish with dancing on the cobblestones.

Opening ceremonies with local dignitaries take place from 1 – 1:20 p.m. on the cobblestones, with welcoming speeches by a Laguna Beach City Council member, Orange County Supervisor Lisa Bartlett, and Karyn Phillippsen, founding president of the LBSCA. The U.S. national anthem will be sung by 13-year-old Lauren Kimball, and La Marseillaise (the French national anthem), will be sung by April Walsh, accompanied by the Community Band.

Additional performances will take place at Main Beach throughout the afternoon, including a second set by the Community Band; The Andersons, a five-piece soft rock band; JJ and the Habibis (Laguna Beach belly dancers); Corazones Alegres Folkloric Dancers; and a band yet to be determined. Throughout the streets, artists will perform from 1:30 – 4 p.m. at approximately 48 locations, with most along Ocean and Forest avenues, and along Coast Highway. A few musicians will be located in the HIP District, further south along Coast Highway.

This year, among the popular returning performers are The Budrows playing their unique cigar-box guitar music in the Kush Gallery alcove; The Montones with their island-inspired melodies at Wells Fargo Bank; The Andersons, a five-member band from LA, performing on Main Beach; April Walsh, chanteuse, on the steps of 2bella Boutique; The Agave Brothers at Skyloft; the bluesy guitar/vocals of Yael & Vlady in the Lumberyard patio; Charles Fullwood inside Hobie Sports; student performances in the Presbyterian Church garden; Elvis; and our French mimes, to name just a few.

Closing ceremonies will take place on the cobblestones at 4:15 p.m. with music yet to be determined. A two-night stay at The Ranch at Laguna Beach will be available as an opportunity drawing prize. Register online prior to the Fete for $20 at www.lagunabeachsistercities.com/fetedelamusique. The drawing will be held and the winner announced at the Closing Ceremonies at 4 p.m. The winner need not be present to win.åå