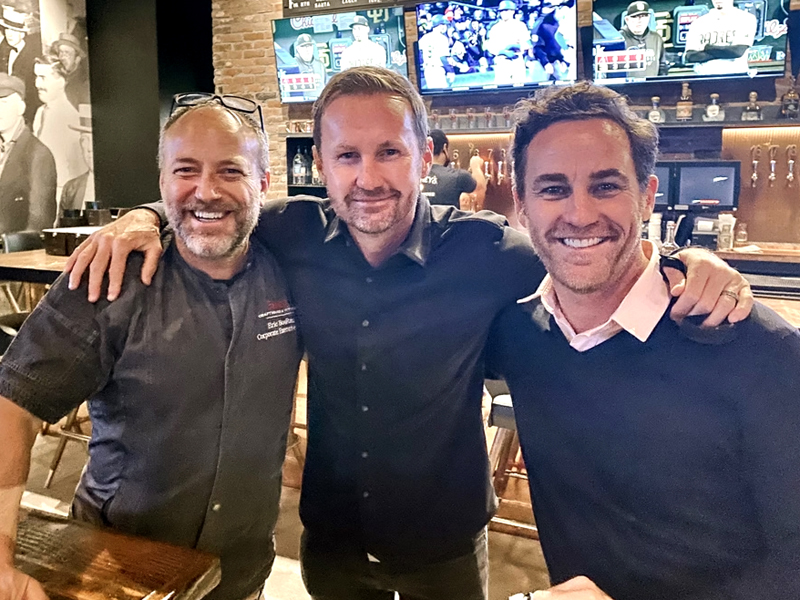 “The day I heard the White House in Laguna Beach became available, I dropped everything I was doing and drove to Laguna,” said Brad Finefrock, the Business Development guy behind the growing Finney’s Crafthouse & Kitchen brand.

“Are you kidding me? The White House? My twin brother, Greg (Founder of Finney’s), and I spent plenty of time at The White House in our formidable 20s. It’s the greatest location in one of the finest beach towns around.

“We were standing there on the patio trying to peek in, and the owner, Jules Marine, walked up and asked if he could help us. I said, ‘We want to rent your place.’ It wasn’t even a question for us,” noted Finefrock.

That first chance meeting in March has led to the culmination of a long-term agreement between Marine and Finney’s Crafthouse & Kitchen, the famously popular American tavern that first set up shop in Westlake Village and has since opened in Santa Barbara, Ventura, San Luis Obispo, Porter Ranch and Burbank.

A Man on a Mission for Memorable Tavern Food

Brad’s twin, Greg Finefrock (pronounced FinneyFrock) has been devoted to restaurant development for 25 years. Initially in franchise development for Baja Fresh and The Counter Burger Restaurant, Greg learned every aspect of operations while mulling the idea of his own concept. Finally, he planted a flag of his own with Finney’s Cratfhouse in Westlake in 2016.

Since then, it’s only gotten better.

Thanks to the talents of Executive Chef Eric Bosrau, Finney’s features “upscale cooking” in a casual atmosphere, with emphasis on an inventive array of from-scratch appetizers and shareables, gourmet burgers, flatbread pizzas, wings, and beer, beer and more craft beer.

Typically offering at least 30 taps, Finney’s focuses on local beers around each restaurant’s location. “At least two-thirds of our beer menu is always focused on local beers,” said Brad.

“That, coupled with our craft cocktails and this rather crazy addictive food menu, we’re really looking forward to welcoming Laguna locals and visitors next summer,” he added.

The Finney’s team of architects has joined forces with Skendarian and contractors already engaged in the renovation to keep the momentum rolling. Once the “shell work” is completed, the new tenant plans to pull building permits in January with a 5-month project buildout to follow.

Last week, Laguna’s Planning Commission approved the request for 130 seats for both indoor and patio use. Finney’s will be removing the dance floor and live entertainment aspect but will be incorporating all the old millwork, black-and-white photos and more to pay reverent homage to the White House’s storied history.

While Planning Commission members were familiar with the popular Finney’s concept, it’s assuring to note that Julian and his wife, Julie, made a single day’s trek north to four of Finney’s locations. That evening, Jules called Brad to say, “We want to have a Finney’s in the White House.”

“We love every location we choose for Finney’s,” said Brad. “But this opportunity in Laguna’s old White House is quite an honor. You just don’t get many chances to take on a legend like this.”