For Chef Craig Strong, Terra is His Terra Firma 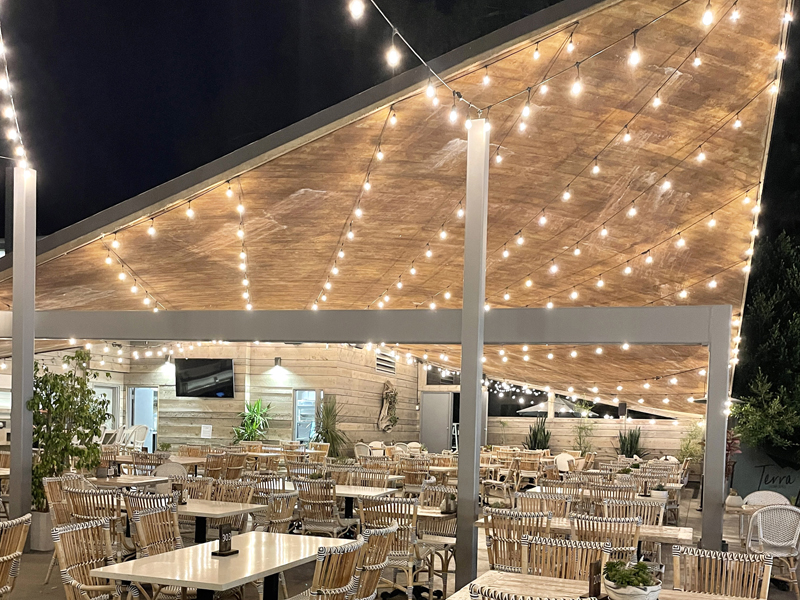 Folks, I just have to say for the record that it sure is great to see Chef Craig Strong’s smile again. 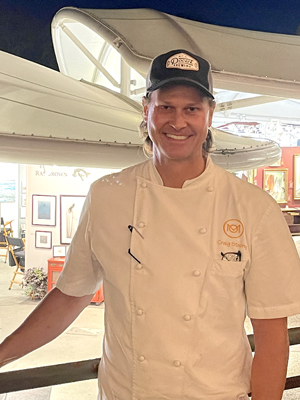 The talented Chef Craig Strong is back in play at Terra on the Festival of Arts grounds.

Certainly, one of the most talented chefs to ever grace Laguna Beach, this Michelin-starred and Five-Diamond legend is fully back in play and loving life at Terra at the Festival of Arts grounds. And with his footing on solid ground, all the rest of us get to enjoy the heady flight.

The decades-long Tivoli Terrace restaurant was sold in 2018 by June Neptune to the Laguna Beach Company and re-opened under the new Terra moniker for that Festival’s season.

In November 2018, it was closed for stem-to-stern renovations, emerging with a swank, open air look and feel for the 2019 Festival. During the renovation, the hyperbolic paraboloid roof, originally designed by architect and former Pageant of the Masters director Don Williamson, was uncovered and showcased once again. It is a stunning 70-foot expanse, supported at only two points.

While the restaurant’s footprint didn’t expand during the renovation, the new design allowed for 250 seats, which includes the “Neptune Terrace, a second-floor open air bar area. 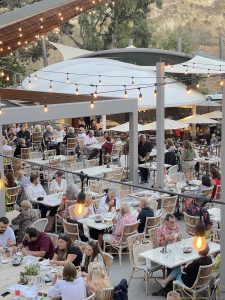 Nested in a backdrop of greenery, Terra is serenity and grace, a perfect sophisticated partner to the other-worldly feel of the Festival of Arts. As I sat at my Terra perch overlooking the festival grounds, listening to the live music and watching festival goers wander through the exhibits, I was struck by just how fortunate we are to live in this magical place.

And I hadn’t even tried the food yet.

Prix Fixe at its Finest

In late 2019, the renovated Terra enjoyed a few short months of private dinners and weddings and, in early 2020, had just welcomed Chef Craig to the fold. And then COVID shut everything down in March.

“It definitely gave me time to work on our recipes,” the ever-unflappable Chef Craig quipped.

As we all wondered if the festivals would be allowed to re-open this summer, Chef kept himself busy with occasional pop-ups at the Laguna Beach Company’s 7° [seven degrees] and menu planning for Terra and the Hotel Laguna yet-unnamed restaurant re-opening (that’s another article coming up). 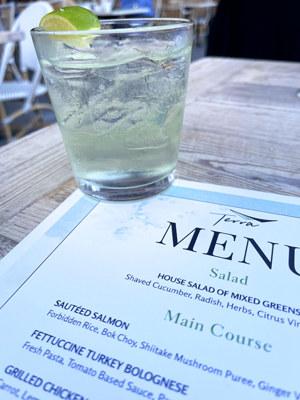 The Terra menu offers a variety of wines, beers and craft cocktails, including this summery “Last Word” made with gin, Green Chartreuse, lime juice and Maraschino Liqueur.

Now, to those of you who may be thinking, “Oh man, just a prix fixe menu,” remember that this is Chef Craig Strong at the helm and the word “just” isn’t even in his vocabulary. While the menu may be efficient in nature, remember this is the former magician of Montage’s Studio and Ocean at Main. Every item is a stunner, both beautifully plated and delectably arranged for the palate.

The Agony of Choosing Between Entrées

No sooner were my buddy, Ali, and I seated than Chef Craig trotted out. As the restaurant behind him bustled along, filled to the very brim with people, he leisurely chatted with us as if the three of us were kibbitzing over a Sunday Turkish coffee at GG’s Bistro.

First mention, of course, was his mom, Margaret, as she’s responsible for the rich Fettucine Turkey Bolognese dish. A great home cook in her own right, she was Chef Craig’s first cookin’ mentor. He hasn’t adjusted a single quarter teaspoon of this recipe.

Although we opted for different entrées, I asked for a side of the Bolognese sauce with some dipping bread. It was as promised, rich and lovely with layer upon layer of slow-cooked flavor. 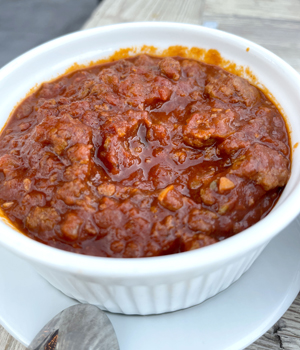 Although I didn’t order this as a main dish, I couldn’t resist a sampler of Bolognese sauce, originally honed by Margaret, Chef Craig’s mom.

The Smoked Pork Loin is smoked all day on site and carved into thick medallions. It’s served up with French style Green Lentils (“puy lentils”) which are smaller than your average legume and require no pre-soaking. They deliver a delightfully smooth earthy and peppery flavor, which pairs quite nicely with Chef Craig’s 5-spice pork sauce and fresh peaches.

Braised Short Ribs are ladled atop potato purée and Chef adds his own Bordelaise sauce to add even more depth and richness.

Chef’s Vegetarian entrée is another work of art designed around the concept of chicken cacciatore but made with cauliflower instead. Still braised in a wine and tomato-based broth, the cacciatore welcomes red and yellow bell peppers, garlic and roasted eggplant. It’s served with Chef’s own marinated artichokes and gluten-free pasta made in house.

The Grilled Chicken came so highly recommended by our server and another concierge friend that I opted for it as my main. True to form, this is half of a deboned chicken, its skin grilled to crispy perfection. Chef adds a swirl of sherry vinegar chicken jus, beautifully fluffed lemon glazed farro, and al dente carrots and broccolini. While it was light and healthy, every bite was a rich discovery. Quite lovely. 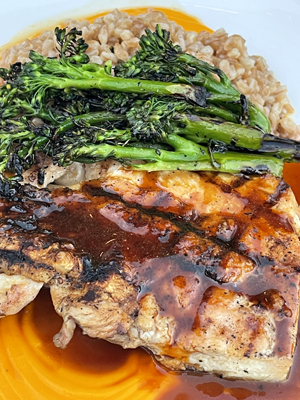 Yet another “simple” dish, the Sautéed Salmon arrived perfectly cooked and flaky. Rather than relying on butter as a typical topper, Chef Craig creates a light vinaigrette consisting of ginger, lime, tamari, sesame and olive oils, and then purées and strains the batch before brushing that on top. A shitake mushroom purée swoops beneath the ensemble, which includes forbidden rice and “the tiniest baby bok choy I could find,” said Chef Craig. 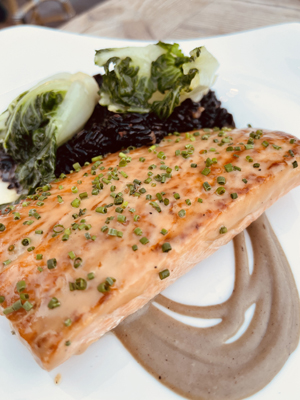 The Terra Salmon finds its perfect meld with forbidden rice and a shitake purée.

Small and tender definitely won this race as the mini bite of the bok choy blended perfectly with the neighborly nuttiness of the rice and earthy purée.

Of course, we had to finish with dessert (because that’s what the prix fixe menu requires – we’re simply following orders). First, we chose the Lemon Verbena Panna Cotta with summer fruits. It arrived with a lush blueberry purée crowning the lemon verbena – absolutely delightful.

The Chocolate Cake with Raspberry Variations, however, takes the cake (as they say). It’s amazing that just a simple sliver can be presented so beautifully and proffer just the right pairing of raspberry love via raspberry piping, fresh berries and smooth sorbet. 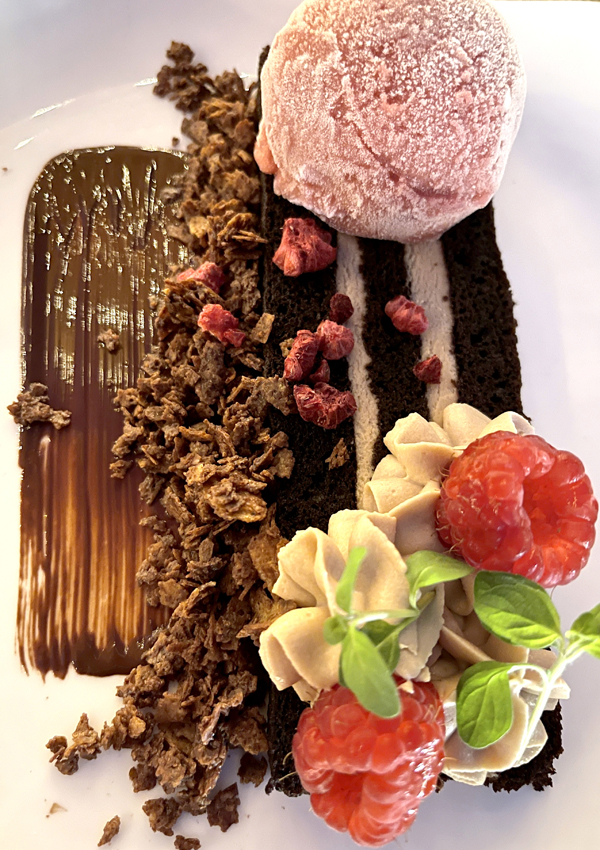 While Chef Craig and his crew are busy every evening at Terra, they also provide all the rest of the food on the Festival grounds at the nearby walk-up window and grill, Intermission.

“You don’t want to get too complicated here,” said Chef. “People want great burgers and sandwiches. They want great hot dogs and tacos. They want a fresh, just-tossed salad, maybe a veggie bowl … and they want crispy fries.

“If you don’t get the fries right, everything is lost,” he finished.

Intermission handles about 400 covers a day, operating from the opening of the daily gates to 10 p.m. at night.

“It’s busy all day but the biggest rush we see actually happens at intermission during the show,” he said. “People will hot-foot it over to get some fries or chili fries or tacos. It’s fun break time food.”

Here’s where Chef is putting a source of great pride and joy to work – his very own Salsa Fuerte Hot Sauce. The top-selling bottled sauce has worked its way into tacos, hummus and crispy fry options, and is meeting increasing demand for burgers and dogs, too.

“Salsa Fuerte has a heat quotient of 720, which is medium … maybe a high medium, but I’m not interested in lighting anyone’s mouth on fire. It’s a perfect flavor enhancer,” he said. 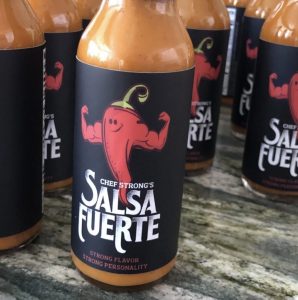 Chef Strong’s own Salsa Fuerte hot sauce is making a splash at Intermission.

A New Home for Locals

As the crowd evaporated at – yes, 8:15 p.m. – Chef Craig talked with us about his home-grown pounds of kumquats, his plans for the indoor and outdoor dining menus at the eagerly anticipated future Hotel Laguna restaurant (sorry, you have to wait for that article), and the Laguna home he and his wife have enjoyed for years.

“I really want the locals to take advantage of this beautiful space here at Terra as well as what’s coming at Hotel Laguna. To the rest of the world, these places are iconic, but to us locals … this is home. I just want the locals to feel like they’re enjoying an extension of their own homes in my home,” he finished.

Terra is open 4 p.m. to 10 p.m. daily. A Festival admission ticket is required to get into the grounds, but admission is free for all Laguna Beach locals. Call (949) 494-9650 or go online for reservations.