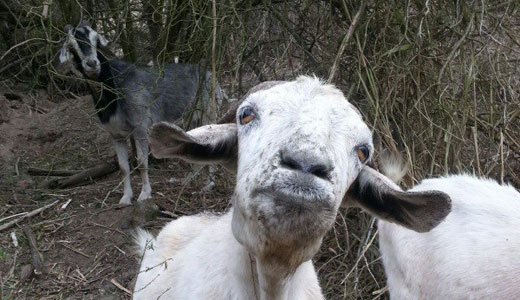 The goats have returned to Laguna Beach’s spring hillsides … all willing participants in the rather unique solution from none other than FEMA, our national Federal Emergency Management Agency.

Since the early 1990s, herds of goats have been toted into Laguna Beach on small flatbed pickup trucks to populate the many rolling hills that surround our Laguna enclave. Here, they engage in their filial duty for God and country by doing the one thing they were born to do: eat copious amounts of weeds and grass.

Yep, it turns out that goats in Laguna Beach are one of the city’s most creative wildfire management ploys yet put into play. Back in the early 1990s, City Manager Ken Frank got the idea after a fast-burning wildfire burned across 14,000 acres and destroyed or damaged 441 homes in 1993’s Laguna Beach fire.

As we all know, one of the best ways to control wildfire is to control the amount of fuel available to potential flames. As we learned from the 1993 fire, it can be very difficult to cut down vegetation and maintain its growth amidst our rocks, steep inclines and remote spots.

Somebody in San Francisco first came up with the Goat Solution and when Ken Frank happened upon the Bay City’s great idea, he applied to FEMA for a “goat grant” in Laguna Beach. In 1995, FEMA funded the program, and did so a second year. Since then, Laguna Beach has continued the effort on its own.

This year, about 600 goats are joining the Laguna Beach residency.

The goats in Laguna Beach work on 11 “fuel modification zones” and yes, they do come with supervision (shepherds) and plenty of water supplies (hey, goats might come cheap, but they have their unions, too). While they faithfully munch away night and day, they also provide a makeshift petting zoo to area parents and kids.

Frankly, I think we should all consider it OUR filial duty to give an occasional goat a hearty pat for the fearless work they do in mowing down looming fire threats. Thank you, you good goats!