Great New Slapfish All About Sustainability 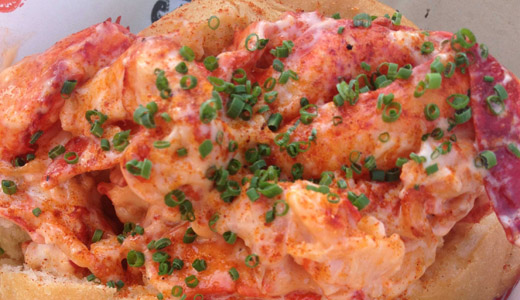 This Tuesday, Slapfish opened its second Orange County restaurant location in the “food court” area next to Carmelita’s Kitchen on Broadway. In a gesture that reflects the restaurant’s generous personality, Slapfish staff handed out 100 of their meaty lobster rolls to locals and lucky passerby, and the small restaurant burbled with activity.

In just its first few days, Slapfish has brought a new energy to a forlorn Laguna Beach courtyard and restaurant arena that has seen all too many attempts come and go.

Even after Carmelita’s Kitchen and Peony Chinese defeated the albatross of failed restaurants in this small corner of Laguna Beach, various takers in the third courtyard space just couldn’t make a go of it. 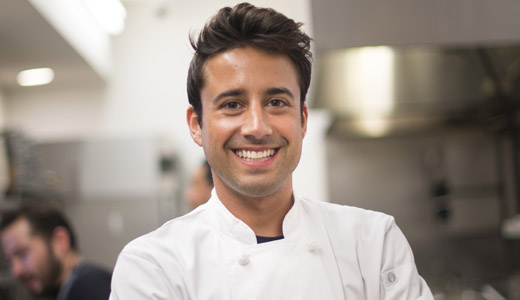 For Chef Andrew Gruel, recently named OC Metro’s “Top 40 Under 40,” this didn’t matter. In fact, this 1,100-square-foot location seemed like a find of the century to the young chef. “The fact that we get to be in Laguna Beach is one thing,” says Gruel. “But a half block off of Main Beach? Who gets that kind of opportunity? For us, it looked like the best possible restaurant space, period.”

The Laguna Slapfish is a smaller version of Gruel’s larger restaurant success in Huntington Beach. With just a couple counter stools inside and a scatter of courtyard tables just outside the restaurant, this is what Gruel calls more of a “grab and go” concept.

Based on what I tried here, you could grab anything on the menu and be one seriously happy camper. Simply put, Slapfish is to fish and chips what Sprinkles is to cupcakes.

It all starts with the freshest possible sustainable fish, with a big emphasis on “sustainable.” In fact, Chef Andrew’s initial career path was only about sustainability of fish. Even as he began his research on the East Coast and ended up at the Aquarium of the Pacific to create educative programs that focused on the importance of seafood sustainability, he had no plan in his head to ever create a restaurant concept around sustainability.

“It just dawned on me one day that the most responsible way to live the sustainability message would be to actually create a hip food movement that only served sustainable fish and seafood,” says Gruel. “Back in 2011, very few restaurants were serving sustainable seafood, and you certainly didn’t see it in any fast food chains.”

And so, the Slapfish Food Truck was born. Chef Andrew rolled up his sleeves and got busy and, sure enough, it proved a very successful “food movement” with fans flocking to his food truck wherever it rolled.

A year later, he had the funds to open an actual restaurant in Huntington Beach, and the fans grew exponentially as they raved, shared and tweeted about his amazing “fast food” fare.

In keeping with its “grab and go” concept, the Slapfish Laguna restaurant is more focused on offering handheld food items and “food you can pick up with your fingers,” says Chef.

On my visit, Chef Andrew slapped down hefty servings of his best-selling Fish Taco, Chowder Fries and Lobster Roll. Then, just to ensure I didn’t go away hungry, he had me try sides of the Lobster Dip ’n Chips and the Fried Pickles (which I have a profound weakness for).

For starters, the servings are quite large, even in the side dishes. The Fried Pickles were a mighty jumble, perfectly battered and served up with pickled red onion slices. The Lobster Dip was loaded with chunks of fresh lobster with a pile of house-made chips to accommodate. And, the Fish Taco was piping hot, crunchy, and drizzled in just enough Slapfish secret recipe chile sauce. 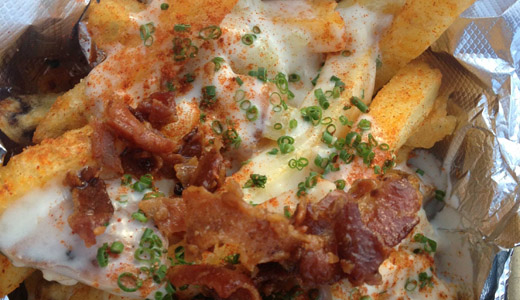 The Chowder Fries were a wonder to behold. As it turns out, they were a sudden invention back in the day when the Food Truck was running out of its famous Clam Chowder. To accommodate frenzied fans, the chefs chose to dole out chowder on a pile of fries, and then topped the fries with their usual chowder toppings of bacon, chopped onion and cheese. Voila, an instant best seller was born. Try these fries and you’ll never go back to plain fries again, believe you me.

The Lobster Roll, though – now this is the classic piece de resistance. Done “East Coast style,” it’s a split top large butter roll packed to the brim and beyond with big chunks of lobster tossed in a light, creamy dressing. It’s ungodly it’s so good.

I’m not sure how many ounces of sustainable lobster are packed into this bun, but its leftovers alone (minus the bun) kept me fed the entire following day.

Already a Food Network star, our young Chef Andrew Gruel is on the fast path to greatness, even with his simple “grab and go” style here in Laguna Beach.

His people are friendly and efficient, and his foundational seafood message proves that conscious choice and buying habits can produce very tasty results. I think our Laguna Beach food court has finally found its sustainable match.