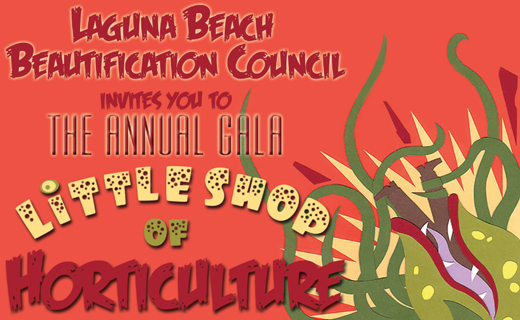 Leave it to the Laguna Beach Beautification Council to come up with a Halloween party on the same night that Laguna boasts its Largest Annual Halloween Party and sees several hundred parents briskly trotting their kids around to the Halloween-iest of the Trick or Treating circuits.

Fact is, this new “Little Shop or Horticulture” Halloween party is already a given, huge success … even four weeks out … even in its incarnation against several staunch competitors … competitors that loom like the thousands of extras in The Walking Dead. (These competitors have legs, man, and they’re hungry.)

So how does this newbie make the scene with assured success? Because the Montage Resort and Laguna Nursery’s Ruben Flores are involved, and their combined creativity is so surprising that people just show up to see what they’ve came up with this time around.

If you’re ready to enjoy an entirely different level of Halloween hilarity, the Little Shop of Horticulture is hosted at none other than the Montage Resort on Oct. 31, from 5 p.m. – 9 p.m. All done in the name of beautifying this lovely berg of ours, tickets are $100 in advance, $125 at the door, and $800 for tables.

Cramming swank, fun and frivolous into a mere 4 hours, this party will see you enjoying the city’s best hors d’Oeurvres and Halloween-inspired drinks, a full course dinner, and very lively entertainment. Meanwhile, a silent auction raises funds for the ongoing work that keeps this town not only beautiful but stellar. (There’s a difference, and you know what I mean if you live in this town.)

Costumes are optional. (Really? You’re going to show up at the Little Shop of Horticulture without a costume? That travesty would deserve a meeting with that man-eating plant from the rock musical/movie assuredly.) So forget what I just wrote. You’re wearing a costume.

Send the little trick-or-treaters out with friends. Tell your teenager to man the front porch. Call up your buddies. This is going to be a party to remember.