Harley’s Sunday “Grill” is a Perfect Ode to Summer 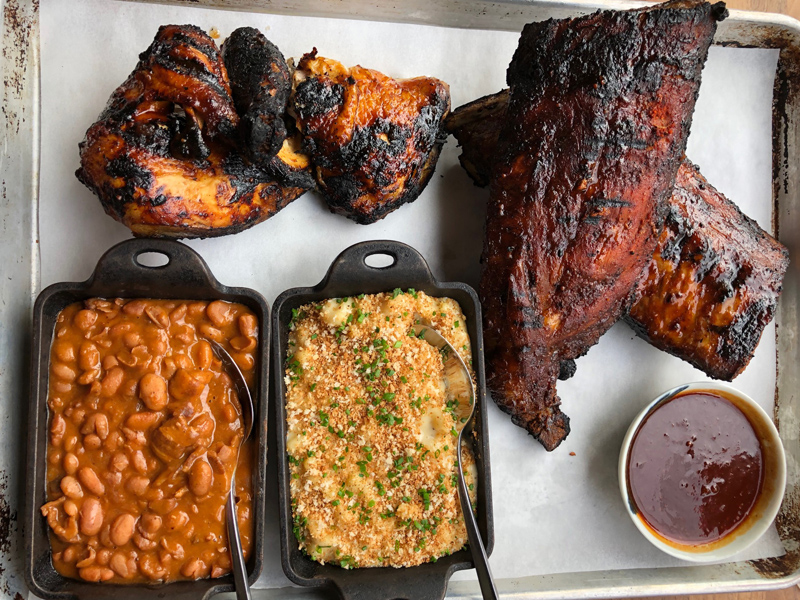 In yet another ode to the happy, growing-up years of our childhood, Harley’s Chef Greg Daniels has created a Sunday family style “backyard BBQ” from 5:00 to 9:00 p.m.

If you’ve been around long enough to remember Three Seventy Common’s “Fried Chicken Sundays,” you will enjoy Harley’s similar take on family-style lovin’. Oddly, when Chef Ryan Adams was in the space (that is now Harley’s), he created his Sunday family-style meals around memories of his grandmother. That spirit still remains intact, it seems, as Chef Greg notes special memories around his grandfather’s backyard barbecues.

Priced at $60 a person inclusive with tax and service, the “Grill and Get Together” menu claims 3 courses, but it’s really seven very hearty dishes.

Several cocktails (including a “Painkiller Kombucha”) are offered as perfect pairs, but on Chef’s recommendations, my friend and I opted for the chilled Cabernet Franc “Lo-Fi,” which is expressly designed for chillin’.

A Table Loaded with Sunday Supper

Chef Greg says the items may change and shift as the weeks roll by, but this should give you a general idea of what I waded through this past Sunday evening: 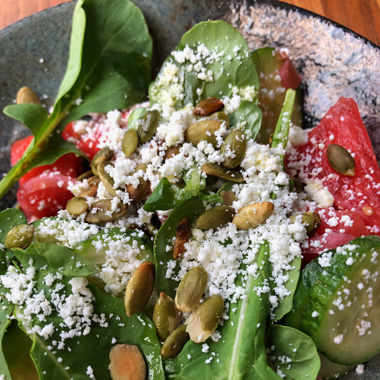 I could have stopped at the starter, Chef Greg’s house-baked buttery brioche roll. The food, however, just kept coming.

After a bright watermelon and arugula salad, the Chef arrived at our table with a sheet pan nearly as large as the table.  It was full loaded with two sets of baby back ribs, a jumble of grilled chicken, and sides of baked beans and mac-and-cheese served up in their own cast iron skillets.

While we came nowhere close to finishing our meal for two, we still managed to work our way through the entirety of dessert – warm summer berry rumble with a dollop of créme fraîche.

“We thought we would just test this out, but I’ve already got some new ideas for next week,” says Chef Greg. “I think it’s a great way to celebrate the end of summer and the start of our autumn months here in Laguna.”

If barbecue just isn’t your thing, Chef Greg will cook up another entrée item for you. The Sunday theme, though, was certainly the most popular guest at our fellow Harley tables. Chef says he will likely run the Sunday affair through September. Go to Harleylagunabeach.com to purchase tickets.