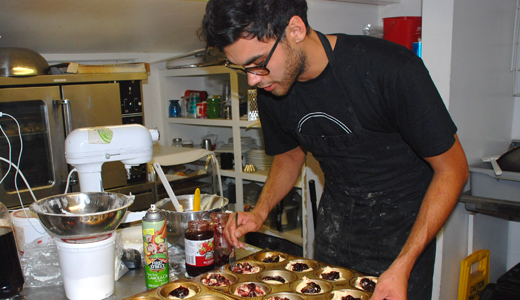 Granted, it’s a lovely gesture and, yes, the travel guide on all the “Best” of Laguna Beach is selling well in outlying regions. But the real reason they chose to carry the book lies in the fact that the only featured baker in Laguna Beach’s Best – Kevin Montoya – operates his “bakery” out of the Hidden House Coffee shop.

Now I know we’re stretching a bit out of bounds here from Laguna Beach’s borders, but this little coffee shop on historical Los Rios street (just across the train tracks from the train depot), is a hidden gem that has a unique connection to our Laguna Beach. 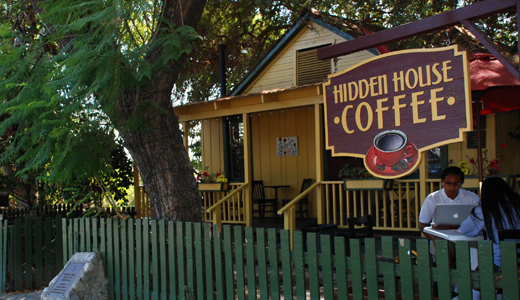 The historic cottage, Hidden House, actually became a coffee shop in about 2010 when Owner Ben Briggs finished his time with the military and was ready to explore entrepreneurism. Initially with his parents’ help, Ben got the coffee shop up and running, then took it over completely about a year later. While he continues to own and manage, he’s recently added “Chief Roaster” to his list as he’s taken over the coffee roasting duties, too.

If you’ve picked up my book or seen my previous blog entries, you know I’m a big fan of Kevin’s, the 24-year-old baker who has infiltrated Laguna Beach with his decadent pastries and towering carrot and chocolate cakes. As I dropped my books off and chatted with him in his kitchen, my suspicions were confirmed: This guy is born to bake.

He started at New York’s Institute of Culinary Education (known to the cooking elite as “ICE”), and decided during an internship at a busy French restaurant that the “controlled chaos” from prep time to closing time each and every day wasn’t his cup of tea. Meanwhile, he found his passion in the school’s pastry modules, and decided to transfer to San Francisco’s Baking Institute to complete his education.

On his return to the O.C., he tried first decorating wedding cakes … that was a “meh” for him. As he considered his next move, serendipity stepped in with a push in the right direction and, weeks later, he was the sole proprietor of his own company, Carley’s Cakes.

In the 10 minutes we chatted, he was prepping his famous raspberry muffins, checking on giant blueberry muffins browning in the oven, and dusting his unique almond croissants with powdered sugar before stacking them into delivery boxes. This skinny kid never stops moving, and he’s always smiling. 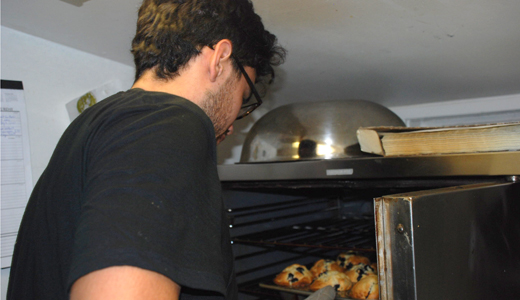 While his initial forays into various retailers and restaurants seemed difficult at first, he stayed the course until he gained his first couple of clients. Now, his distribution is rapidly expanding, not only in numbers of participating restaurants and retailers, but in the growing number of different pastries, muffins, cupcakes and cakes being requested. (If you’re one such decision maker reading this entry, contact Kevin for your own taste test at kevin@carleycakes.com … and, no, he’s not paying me for this endorsement – he’s simply a baking talent your clientele will love.)

In Laguna Beach, Kevin’s treasures can be found (if you’re fast enough) at Laguna Coffee and Eva’s Caribbean Kitchen. And, of course, the next time you’re in SJC, be sure to toss in to Hidden House for a freshly made baked good right on the premises. (To assuage the guilt you may feel, I’ll be introducing you to fitness boot camps in Laguna Beach shortly.)