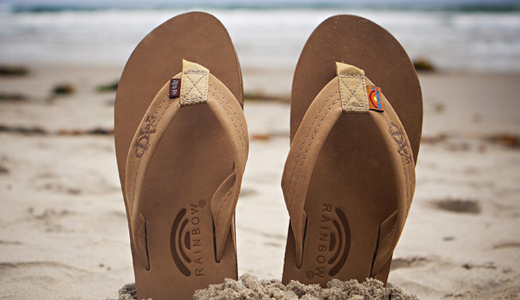 Given that we seem to have skipped winter this year in Laguna Beach, it’s time to discuss a very serious “summer” matter: Flip-flops.

Proper flip-flop selection is a paramount decision for every man, woman and child. Fortunately, two of the best-selling flip-flops in the entire world originated from two Laguna Beach garages.  (How weird is that?)

Me? I’ve always been a dyed-in-the-wool Rainbows fan. Interestingly, Rainbows Founder Jay “Sparky” first began selling his flip-flops in 1972 to Dick Metz, Founder of Hobie Surf Shop in Laguna Beach. As the story goes, Sparky would make 6 pairs of flip-flops, put them on consignment, collect a check for the six sales, and squeeze out 12 new flip-flop pairs from the check’s proceeds.

Despite the fact that Rainbows are now one of the top selling flip-flops of all time, there are plenty of pairs still on sale at Hobie.

In fact, every Laguna Beach resident worth his or her salt knows that the best selection of flip-flops is housed on the Great Wall of Hobie’s, at the corner of Forest and Beach Avenue. In spring and summer months, it’s actually more than one great wall of row upon row of flip-flops.

Don’t let all those varieties confuse you, though. There are really only two to consider – aforementioned Rainbows and Olukai, the other flip-flops born in a Laguna Beach garage.

This time, the garage belonged to Danny and Susan McTherny, who set out to design a more rugged flip-flop for watermen and women (i.e, paddlers, lifeguards, etc.). (One guess on which store they began consignment sales with. Yup … Hobie.)

In less than 5 years, Olukai had grown to epic proportions – they’re even in Nordstrom’s, for heaven’s sake. But you want to get Olukai where they were first born. And there’s no better Olukai variety than the Hobie Surf Shop in Laguna Beach.