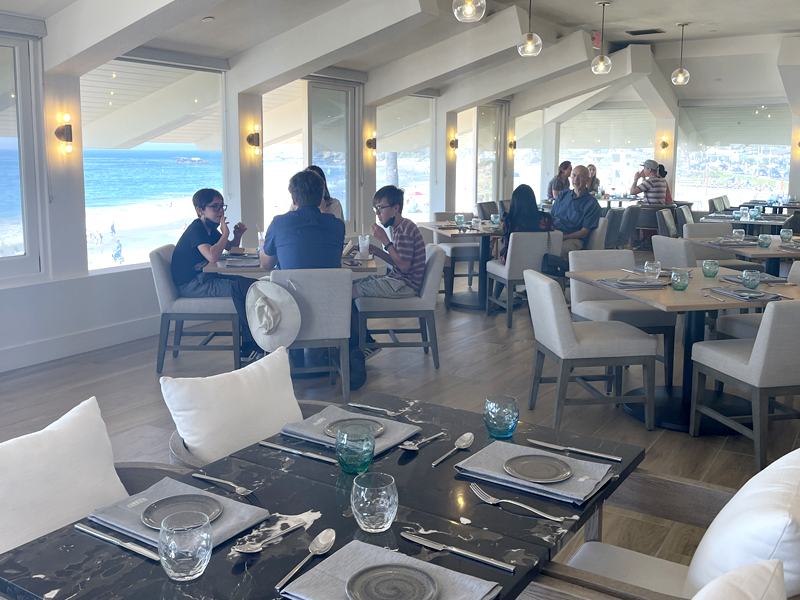 This past weekend, Hotel Laguna opened her doors for a few private-invite “sneak peeks.” It was met with such enthusiasm and wonder that it reminded me of the original Willy Wonka & The Chocolate Factory movie when the fabled factory allowed a handful of people in who had discovered the “golden ticket” in their chocolate bars.

Shuttered on New Year’s Eve 2017, the Hotel Laguna has stood silent for nearly four years. In about two weeks, though, the Grand Dame will be alight with what will assuredly be a steady stream of diners and private events. 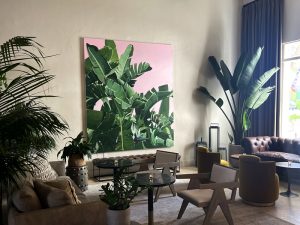 While the Laguna Beach Company continues to work on renovations throughout the hotel, the team will be opening three important venues – the main restaurant and patio, newly named “Larsen,” a new casual sushi bar, “Fin,” and the Hotel Laguna Beach Club, which will still be offering full wait service from a limited restaurant menu (alcohol included) on the sand.

My Tour With Chef Craig

When I met with Chef Craig Strong on Saturday, he whisked me into a quick tour, all the while grinning from ear to ear. Although the Michelin-starred chef has had plenty to do with re-opening Terra at the Festival grounds this summer and providing help where needed to the seven-degrees event center, his eye has always been on steering the food and beverage of this rare prize, the only Laguna restaurant experience right on the sand. 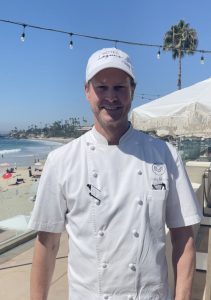 “This is just the perfect Southern California experience,” he told me from the open air patio. “You can start with your toes in the sand at our Beach Club. We’re fortunate to have a full liquor license to serve you any drink on the sand, and we’ll bring the food to you, too.”

Although the team is still working out the membership aspects of the hallowed Hotel Laguna Beach Club, anyone is welcome to walk up and reserve a beach chair for just $25. (This could be changing soon, so take advantage while it’s offered!). 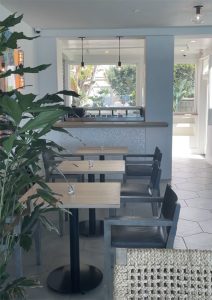 The Fin sushi restaurant opening in Hotel Laguna offers a casual menu in a casual atmosphere.

restaurant, a renovation from what used to be a group dining private room. Done in cool blues and brushed gray, it frames a beautiful view to the ocean blue outside.

“This is a great way to get an entirely different kind of menu than what the main restaurant (Larsen) and bar will be serving,” noted Chef Craig. “It just has a really nice relaxed vibe.”

The bar is such a significant renovation that it’s hard to believe it’s the same room. Where before it almost felt like an overflow room, the newly refreshed bar is looking like the belle of the ball. Beautifully modernized with just the right amount of burnished gold, the room’s dimensions haven’t changed an inch but it feels so airy and light now with dramatic arched mirrors stretching to a ceiling we never noticed before. 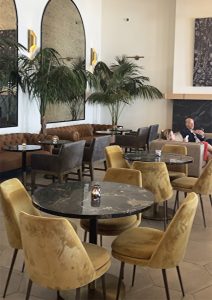 Not to be upstaged by her neighbors, the hotel’s main restaurant (see photo at top) is also significantly refurbished with cool neutrals that accent the gorgeous sweep of sand, ocean and sky framed in the historical picture windows. Named after our original Laguna Beach Greeter, Eiler Larsen, Chef Craig tells me that the restaurant will offer a broad range of menu items for both casual and fine-dining diners.

“You don’t want to limit you menu in a place like this to just one style or type of food,” he explained. “Whether our guests choose the patio or the dining room, they’ll be able to order what they feel they deserve and want to eat. It’s all about them.”

Menu details are forthcoming in a future article from me (be assured of that!).

As noted, the Hotel Laguna bar, restaurants and beach club seating will open officially in about two weeks once the team feels confident in its training for both front and back of house. Following a ramp-up period, Larsen’s indoor and outdoor dining will eventually be open seven days a week with brunch on the weekends, while Fin will be open from Tuesday through Sunday.

And speaking of back of house …

Hotel Laguna General Manager Chad St. John was next to greet me, offering a peek into the completely renovated hotel kitchen. In short, this is a work of art, a gleaming, stream-lined edifice to service the restaurant and eventual room service orders. 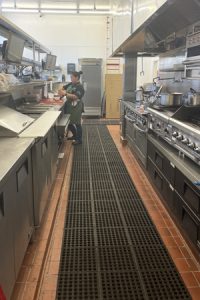 The renovated kitchen at Hotel Laguna

The team will also be adding a smaller food prep area (complete with a separate dish washing area) one floor below to accommodate a new, swank Beach Club that will be available for private events. A significant bar has been built into one side of the former large ballroom, restoring a bar that had been removed by the previous hotel operators. Tables, TVs, and even possible pool tables are planned for this casual watering hole while giant, floor-to-ceiling glass doors will serve as the front wall, ushering club members directly onto the sand.

Club members will have separate side access to the Club, which ports them into the original “rum runners tunnel” that used to stretch under Hotel Laguna and Coast Highway to “service” restaurants and bars of a bygone era. This, too, is refurbished and gleaming, including two expansive changing rooms for Club members.

Chad (who is, by the way, older brother to Chef Kyle St. John at The Ranch’s Harvest restaurant) can only be described as “overjoyed” with his new position at Hotel Laguna. A longtime resident here, he’s worked at all levels of restaurant and bar management. As he showed me the “coming soon” Beach Club expanse, he was downright giddy. 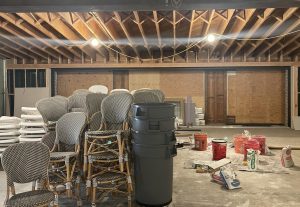 “It’s just such a rare treat to be able to open a Beach Club like this just feet from the sand at Main Beach,” he said. “This is definitely going to provide a memorable experience fro club members for years to come,” he said.

Beach Club membership details will be sussed and finalized in the weeks ahead with announcements about the annual membership expected by or before year’s end.