Howling for Coyote Almost at an End

If you’re a SoLag resident, your restaurant options are few and far between. So, when Coyote Grill closed down for a purported 6 weeks of renovation, we residents here had to face some tough questions:

Coyote is our own little watering hole. The food is decent (particularly the seasonal Baja grilled lobster and their daily unforgettable calamari tacos and wet chicken burrito smothered in their own melty cheese and green sauce). The happy hours are 7 days a week. Steve and Mark stir up a serious margarita. It’s an awesome option for quiet weekday breakfast meetings. And, watching tourists from the 4-seater window is better than any TV show.

In a nutshell, Coyote rocks. 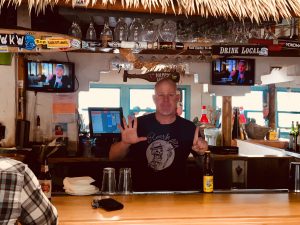 If you saw the Tom Hanks movie, “Money Pit,” you’ll remember that every contractor coming in to rescue parts of Tom’s dilapidated mansion assured him that their part in the restoration would only take 6 weeks. Here’s my photo of Mark, the bartender, on April 7th, just 48 hours prior to the restaurant closing.

Since then, 14 weeks have passed. That’s two 6-week periods PLUS two weeks for good measure.

Rumor is that Coyote Grill will be doing a soft opening sometime this weekend to welcome back their most valiant supporters. This is akin to handing a pail of fresh, cool water to a poor soul who’s just crossed the Mojave Dessert. We’ve been absolutely miserable these 14 weeks.

When I dropped in yesterday (Thursday), though, we don’t look like we’re quite to that point. 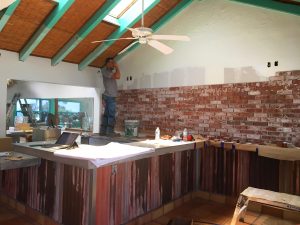 You never know, though. Once the permitted pieces are approved, it’s really just a matter of interior finish and dusting off a few tables, right? (I ask hopefully.)

Why All the Dust?
Aside from the need to replace an aging bar and kitchen, Coyote Grill needed to update its accommodations for ADA compliance. In so doing, the bathrooms and the hallway to said bathrooms have been beautifully revamped, and the bar has been completely reconfigured for ADA compliance as well.

Because the compliance requires understandable and necessary space, the Coyote bar portion is now significantly smaller. Gone is the palapa and the great white shark (if you’re a regular, you know what I’m talking about), and the bar is certainly more vertical and open in nature. Granted, the vertical stature isn’t going to seat more bar patrons, but I’m not sure that’s even going to be a contingency factor. Coyote Grill patrons who prefer the bar will maintain that state of mind to the end of times. 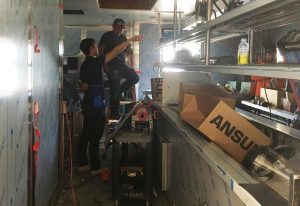 The dining areas in the small restaurant remain the same, though now boosting lovely new tile floors and the removal of a divider wall that divided the former space into tiny little squares.

Enough About the Details …
Right. We just want to know when it’s going to open. Well … it will hopefully happen sometime in the week ahead. Watch my Facebook page for updates!